Open Road Media recently published Marlene Dietrich, a biography of the eponymous actress, written by her daughter, Maria Riva. To celebrate its release, the publisher has allowed me to share an excerpt. First, though, here’s the official synopsis:

With intimate detail, author Maria Riva reveals the rich life of her mother, Marlene Dietrich, the charismatic star of stage and screen whose career spanned much of the twentieth century. Opening with Dietrich’s childhood in Schöneberg, Riva’s biography introduces us to an energetic, disciplined, and ambitious young actress whose own mother equated show business with a world of vagabonds and thieves.

Dietrich would quickly rise to stardom on the Berlin stage in the 1920s with her sharp wit and bisexual mystique, and wearing the top hat and tails that revolutionized our concept of beauty and femininity. She comes alive in these pages in all her incarnations: muse, collaborator, bona fide movie star, box-office poison, lover, wife, and mother.

During World War II, Dietrich would stand up to the Nazis and galvanize American troops, eventually earning the Congressional Medal of Freedom. There were her artistic relationships with Josef von Sternberg (The Blue Angel, Morocco, Shanghai Express), Colette, Erich Maria Remarque, Noël Coward, and Cole Porter, as well as her heady romances. And in her final years, Dietrich would make herself visibly invisible, devoting herself to the immortality of her legend.

Capturing this complex and astonishing woman, Maria Riva’s insightful profile of her mother has the depth, range, and resonance of a novel, and takes us on a journey through Europe and old Hollywood during an era that is gone but not forgotten.

The excerpt, which starts after the break, covers how the actress decided on her stage name.

END_OF_DOCUMENT_TOKEN_TO_BE_REPLACED

Today, we have a short excerpt from Phoebe Hoban‘s Basquiat: A Quick Killing in Art. Published by Open Road Media as an eBook on May 17th, here’s the synopsis:

Painter Jean-Michel Basquiat was the Jimi Hendrix of the art world. In less than a decade, he went from being a teenage graffiti artist to an international art star; he was dead of a drug overdose at age twenty-seven. Basquiat’s brief career spanned the giddy 1980s art boom and epitomized its outrageous excess. A legend in his own lifetime, Basquiat was a fixture of the downtown scene, a wild nexus of music, fashion, art, and drugs. Along the way, the artist got involved with many of the period’s most celebrated personalities, from his friendships with Keith Haring and Andy Warhol to his brief romantic fling with Madonna.

Nearly thirty years after his death, Basquiat’s story — and his art — continue to resonate and inspire. Posthumously, Basquiat is more successful than ever, with international retrospectives, critical acclaim, and multimillion dollar sales. Widely considered to be a major twentieth-century artist, Basquiat’s work has permeated the culture, from hip-hop shout-outs to a plethora of products. A definitive biography of this charismatic figure, Basquiat: A Quick Killing in Art is as much a portrait of the era as a portrait of the artist; an incisive exposé of the eighties art market that paints a vivid picture of the rise and fall of the graffiti movement, the East Village art scene, and the art galleries and auction houses that fueled his meteoric career. Basquiat resurrects both the painter and his time.

END_OF_DOCUMENT_TOKEN_TO_BE_REPLACED 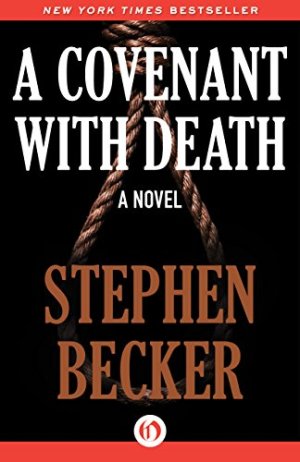 Today, we have a short excerpt from Stephen Becker’s New York Times-bestselling A Covenant With Death. The novel, first published in 1964, will be released by Open Road Media in eBook next week. If the title is familiar, it might be because the novel was adapted into a movie starring George Maharis and a young Gene Hackman, in 1967. Here’s the synopsis:

On a sultry day in the spring of 1923, Louise Talbot spends the last afternoon of her life lounging in the shade of a sycamore tree in her front yard. Beautiful and vivacious, Louise is the talk of Soledad City — every man lusts after her; every woman wants to know her secrets. She is found strangled to death that evening, and when the investigation uncovers her affair with another man, the citizens of the frontier town draw the obvious conclusion: Bryan Talbot murdered his wife in a fit of jealousy and rage.

Presiding over the trial is twenty-nine-year-old Ben Lewis. Appointed to the bench as a tribute to the memory of his late father, he fears he is too inexperienced to sentence another man to death. All the evidence points to Talbot, however, and it is a magistrate’s sworn duty to see that justice is served. But when a last-second twist casts the question of the defendant’s guilt or innocence in a shocking new light, Judge Lewis must decide whether to uphold the law — or let a murderer go free.

A thrilling suspense story and a fascinating inquiry into human nature and the true meaning of justice.

Read on for the excerpt, which is taken from early in the novel. END_OF_DOCUMENT_TOKEN_TO_BE_REPLACED

END_OF_DOCUMENT_TOKEN_TO_BE_REPLACED

The Ill-Made Mute is the first in Cecilia Dart-Thornton‘s Bitterbynde trilogy, which has recently been republished in eBook by Open Road Media. Here’s the synopsis:

In a dark and perilous realm, an outcast without a name or a memory seeks a voice, a past, and a future in the fir1st installment of a modern classic fantasy trilogy

In all of Erith, there is perhaps no one as wretched as the nameless mute foundling confined to the lowest depths of Isse Tower. Abused by many and despised by all, the pathetic creature lives without memories in the shadows. The amnesiac longs to escape — to roam the wild landscape in search of a past, a name, a destiny — but dangers surround the tower. Only flying ships and majestic winged horses carrying important visitors can reach the castle safely, landing high above the ground on its battlements. The local servants whisper about malevolent creatures that roam the forests and bear no love for humankind. Escape seems impossible in this treacherous world of wights and monsters.

Open Road Media have also published the other two novels in the series: The Lady of Sorrows and The Battle of Evernight. For more on the series, check out CR’s interview with Cecilia Dart-Thornton on Wednesday.

Read on for an excerpt from The Ill-Made Mute. END_OF_DOCUMENT_TOKEN_TO_BE_REPLACED