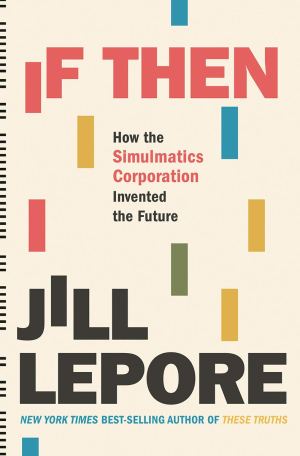 A new Jill Lepore book is always something to celebrate! And this latest looks quite different from the author’s previous histories. In the past, Lepore has covered topics such as the storytelling tradition in America (The Story of America), The Secret History of Wonder Woman, and has also tackled the Herculean task of writing a single-volume history of the United States (These Truths). If Then is a history of a data company established during the Cold War and how its influence can still be felt today. Here’s the synopsis:

A brilliant, revelatory account of the Cold War origins of the data-mad, algorithmic twenty-first century, from the author of the acclaimed international bestseller These Truths.

The Simulmatics Corporation, founded in 1959, mined data, targeted voters, accelerated news, manipulated consumers, destabilized politics, and disordered knowledge — decades before Facebook, Google, Amazon, and Cambridge Analytica. Silicon Valley likes to imagine that it has no past, but the scientists of Simulmatics are the long-dead grandfathers of Mark Zuckerberg and Elon Musk. Borrowing from psychological warfare, they used computers to predict and direct human behavior, deploying their “People Machine” from New York, Cambridge, and Saigon for clients that included John Kennedy’s presidential campaign, the New York Times, Young & Rubicam, and, during the Vietnam War, the Department of Defense.

Jill Lepore, distinguished Harvard historian and New Yorker staff writer, unearthed from archives the almost unbelievable story of this long-vanished corporation, and of the women hidden behind it. In the 1950s and 1960s, Lepore argues, Simulmatics invented the future by building the machine in which the world now finds itself trapped and tormented, algorithm by algorithm.

I’m really looking forward to reading this. I would also highly recommend The Story of America and The Secret History of Wonder Woman. If you are looking for a single-volume history of the United States, then These Truths is certainly one to consider (I’ve typically found that genre rather unwieldy, but Lepore’s book is excellent).

If Then is due to be published by Liveright in North America and in the UK, on September 15th, 2020.

END_OF_DOCUMENT_TOKEN_TO_BE_REPLACED

Jill Lepore is one of my favourite historians. Ever since discovering her work in the New Yorker, I have eagerly read anything of hers I could get my hands on (not always easy, when I lived in the UK). The Story of America (Princeton University Press) is one of my favourite non-fiction books, and a must for anyone interested in reading about the evolution of storytelling in, and the story of the United States. Lepore is also the author of the excellent The Secret History of Wonder Woman, Joe Gould’s Teeth and New York Burning (among others).

This year, W. W. Norton is due to publish Lepore’s latest book: a substantial, single-volume history of the United States. Here’s the synopsis for These Truths:

In the most ambitious one-volume American history in decades, award-winning historian Jill Lepore offers a magisterial account of the origins and rise of a divided nation.

The American experiment rests on three ideas — “these truths,” Jefferson called them — political equality, natural rights, and the sovereignty of the people. And it rests, too, “on a dedication to inquiry, fearless and unflinching,” writes Jill Lepore in a groundbreaking investigation into the American past that places truth itself at the center of the nation’s history. In riveting prose, These Truthstells the story of America, beginning in 1492, to ask whether the course of events has proven the nation’s founding truths, or belied them. “A nation born in contradiction, liberty in a land of slavery, sovereignty in a land of conquest, will fight, forever, over the meaning of its history,” Lepore writes, finding meaning in those very contradictions as she weaves American history into a majestic tapestry of faith and hope, of peril and prosperity, of technological progress and moral anguish. A spellbinding chronicle filled with arresting sketches of Americans from John Winthrop and Frederick Douglass to Pauli Murray and Phyllis Schlafly, These Truths offers an authoritative new history of a great, and greatly troubled, nation.

I’m really looking forward to reading this. These Truths is published by W. W. Norton in September 2018 (in North America and the UK).