Ella has a Thing. She sees a classmate grow up to become a caring nurse. A neighbor’s son murdered in a drive-by shooting. Things that haven’t happened yet. Kev, born while Los Angeles burned around them, wants to protect his sister from a power that could destroy her. But when Kev is incarcerated, Ella must decide what it means to watch her brother suffer while holding the ability to wreck cities in her hands.

Rooted in the hope that can live in anger, Riot Baby is as much an intimate family story as a global dystopian narrative. It burns fearlessly toward revolution and has quietly devastating things to say about love, fury, and the black American experience.

Ella and Kev are both shockingly human and immeasurably powerful. Their childhoods are defined and destroyed by racism. Their futures might alter the world.

In Tochi Onyebuchi’s first book for Tor.com, we are introduced to Ella and Kev: sister and brother, navigating contemporary and future America. This is an unstinting look at the injustices of modern society, as well as an extrapolation of where the country could be headed if these failings are left unchecked. It’s a powerful story, and I very much enjoyed reading it. END_OF_DOCUMENT_TOKEN_TO_BE_REPLACED

A short, engaging novella about imperialism and exclusion

A young royal from the far north, is sent south for a political marriage in an empire reminiscent of imperial China. Her brothers are dead, her armies and their war mammoths long defeated and caged behind their borders. Alone and sometimes reviled, she must choose her allies carefully.

Rabbit, a handmaiden, sold by her parents to the palace for the lack of five baskets of dye, befriends the emperor’s lonely new wife and gets more than she bargained for.

At once feminist high fantasy and an indictment of monarchy, this evocative debut follows the rise of the empress In-yo, who has few resources and fewer friends. She’s a northern daughter in a mage-made summer exile, but she will bend history to her will and bring down her enemies, piece by piece.

In this short novella, Vo introduces us to a handful of interesting and engaging characters, as one regales another with a story of imperialism and oppression. As the synopsis states, the world depicted is akin to imperial China, and the author has a gift for writing evocative, albeit-brief description. After meeting Rabbit, the emperor’s wife’s handmaid, Cleric Chih learns Empress In-yo’s story. Through this, we glean the larger picture of not only In-yo’s life, but also the world and culture in which all of the characters exists. END_OF_DOCUMENT_TOKEN_TO_BE_REPLACED

Another magnificent novella from the master of the form

In a botched demonic extraction, they say the demon feels it ten times worse than the man. But they don’t die, and we do. Equilibrium.

The unnamed and morally questionable narrator is an exorcist with great follow-through and few doubts. His methods aren’t delicate but they’re undeniably effective: he’ll get the demon out — he just doesn’t particularly care what happens to the person.

Prosper of Schanz is a man of science, determined to raise the world’s first philosopher-king, reared according to the purest principles. Too bad he’s demonically possessed.

I love K.J. Parker’s short fiction. In addition to his excellent prose, the author is able to pack in so much into his short stories and novellas: they are humorous, subversive, and peppered with historical allusions. Prosper’s Demon is no different. I thoroughly enjoyed this. END_OF_DOCUMENT_TOKEN_TO_BE_REPLACED

When the djinn king Melek Ahmar wakes up after millennia of imprisoned slumber, he finds a world vastly different from what he remembers. Arrogant and bombastic, he comes down the mountain expecting an easy conquest: the wealthy, spectacular city state of Kathmandu, ruled by the all-knowing, all-seeing tyrant AI Karma. To his surprise, he finds that Kathmandu is a cut-price paradise, where citizens want for nothing and even the dregs of society are distinctly unwilling to revolt.

Everyone seems happy, except for the old Gurkha soldier Bhan Gurung. Knife saint, recidivist, and mass murderer, he is an exile from Kathmandu, pursuing a forty-year-old vendetta that leads to the very heart of Karma. Pushed and prodded by Gurung, Melek Ahmer finds himself in ever deeper conflicts, until they finally face off against Karma and her forces. In the upheaval that follows, old crimes will come to light and the city itself will be forced to change.

This novella was a pleasant surprise. I hadn’t read anything by Hossain before, but The Gurkha and the Lord of Tuesday turned out to be amusing, engaging, and also thought-provoking. I very much enjoyed it. END_OF_DOCUMENT_TOKEN_TO_BE_REPLACED

Next year, Tor.com are due to publish a new novella by Alex Irvine that looks very interesting: Anthropocene Rag. I wasn’t sure if I’d read anything else by Irvine, but while putting together this post, I remembered his short story Black Friday (which I enjoyed). He has also worked extensively in comics, games, and many other novels and short stories. Anthropocene Rag is due to be published on March 31st, 2020. Here’s the synopsis:

In the future United States, our own history has faded into myth and traveling across the country means navigating wastelands and ever-changing landscapes.

The country teems with monsters and artificial intelligences try to unpack their own becoming by recreating myths and legends of their human creators. Prospector Ed, an emergent AI who wants to understand the people who made him, assembles a ragtag team to reach the mythical Monument City.

In this nanotech Western, Alex Irvine infuses American mythmaking with terrifying questions about the future and who we will become.

Looking forward to this. 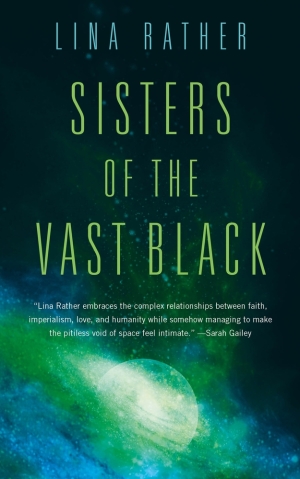 An intriguing sci-fi story of secrets and survival

Years ago, Old Earth sent forth sisters and brothers into the vast dark of the prodigal colonies armed only with crucifixes and iron faith. Now, the sisters of the Order of Saint Rita are on an interstellar mission of mercy aboard Our Lady of Impossible Constellations, a living, breathing ship which seems determined to develop a will of its own.

When the order receives a distress call from a newly-formed colony, the sisters discover that the bodies and souls in their care — and that of the galactic diaspora — are in danger. And not from void beyond, but from the nascent Central Governance and the Church itself.

This, for me, was a novella ultimately about secrets: the secrets we tell ourselves, and those we keep from others — especially those who are close to us. It is also set in an engaging, interesting version of the future. END_OF_DOCUMENT_TOKEN_TO_BE_REPLACED 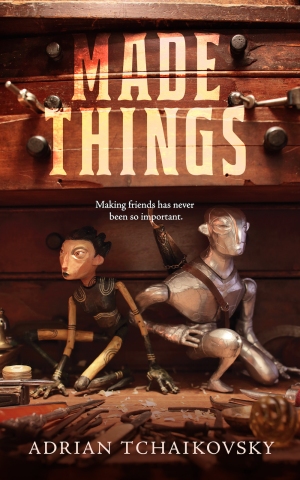 An interesting new fantasy novella from one of the most versatile, talent (and consistent) authors writing today

Making friends has never been so important.

Welcome to Fountains Parish — a cesspit of trade and crime, where ambition curls up to die and desperation grows on its cobbled streets like mold on week-old bread.

Coppelia is a street thief, a trickster, a low-level con artist. But she has something other thieves don’t… tiny puppet-like companions: some made of wood, some of metal. They don’t entirely trust her, and she doesn’t entirely understand them, but their partnership mostly works.

After a surprising discovery shakes their world to the core, Coppelia and her friends must re-examine everything they thought they knew about their world, while attempting to save their city from a seemingly impossible new threat.

I’m always eager to read any new novella (or full-length novel) by Adrian Tchaikovsky. Long-time readers of CR will know how much I enjoy his work, and that I’ve enjoyed everything of his that I’ve read. Made Things is no exception: this is an engaging, imaginative story in a new fantasy setting. END_OF_DOCUMENT_TOKEN_TO_BE_REPLACED