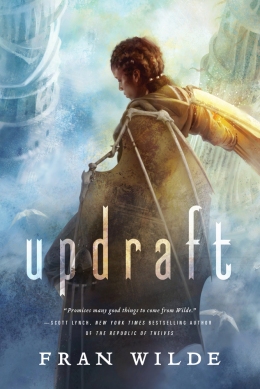 Welcome to a world of wind and bone, songs and silence, betrayal and courage.

Kirit Densira cannot wait to pass her wingtest and begin flying as a trader by her mother’s side, being in service to her beloved home tower and exploring the skies beyond. When Kirit inadvertently breaks Tower Law, the city’s secretive governing body, the Singers, demand that she become one of them instead. In an attempt to save her family from greater censure, Kirit must give up her dreams to throw herself into the dangerous training at the Spire, the tallest, most forbidding tower, deep at the heart of the City.

As she grows in knowledge and power, she starts to uncover the depths of Spire secrets. Kirit begins to doubt her world and its unassailable Laws, setting in motion a chain of events that will lead to a haunting choice, and may well change the city forever-if it isn’t destroyed outright.

Upon its release, Updraft enjoyed a fair amount of positive buzz from SF/F critics and reviewers that I respect, and when it popped up on numerous “Best Books of 2015” lists, I knew I had to give it a read. When a book receives such widespread hype, my anticipation tends to ratchet up. First and foremost, I was very intrigued by the idea of a city made out of living bones, where humans live far above the ground and get around by flying. This set my imagination running, and I was excited to find out what exactly brought the situation into being. Furthermore, I tend to prefer books written in first person perspective, so this seemed like it would be a perfect read. END_OF_DOCUMENT_TOKEN_TO_BE_REPLACED

Your next novel, Cloudbound, is the follow-up to Updraft and due out in September 2016. What can fans of the first novel expect from the new book?

Where Updraft was in some ways about voice — and who speaks, who is heard, and who is not, Cloudbound shifts to a new focus, and a new narrator: Nat.

After the events in Updraft, Nat’s learning how to be a leader, and the benefits and costs of doing so. Politics in the city of living bone are more complex than ever, as are relationships — Nat’s and Kirit’s friendship is tested beyond the breaking point, as is Nat’s understanding of how the city works.

Where Updraft was a story above the clouds, Cloudbound — well, the title tells you a lot about where we’re headed. And yup, more monsters. Big ones. END_OF_DOCUMENT_TOKEN_TO_BE_REPLACED

END_OF_DOCUMENT_TOKEN_TO_BE_REPLACED

Let’s start with an introduction: Who is Fran Wilde?

Fran Wilde (that’s me!) can program robot minions, set gemstones, tie a sailor’s knot board, and harmonize perfectly when alone in my car.

Your debut novel, Updraft, was published by Tor Books at the beginning of September. It looks really cool. How would you introduce it to a potential reader? Is it part of a series?

Updraft is about wind and wings, secrets and betrayal, songs and silence. It is a high-flying adventure in a city of bone towers that rises above the clouds. Updraft can be read as a stand-alone book; there will be another, Cloudbound, coming from Tor in fall 2016. END_OF_DOCUMENT_TOKEN_TO_BE_REPLACED