Let’s start with an introduction: Who is James Islington?

I’m 35, Australian, married and with a daughter who’s just turned one. I’ve been writing for about five years now (I originally self-published in 2014 before getting picked up by Orbit)… prior to that, I was running a tech startup, which I really didn’t enjoy at all.

I’m into board games (I own more than 200), video games (I own… too many in my Steam account to admit), TV, movies and the occasional anime. Sometimes books, too!

Your debut novel, The Shadow of What Was Lost, was published recently by Orbit. It looks rather interesting, and I’ve been hearing great things about it (it’s near the top of my ever-tottering TBR mountain). How would you introduce it to a potential reader? Is it part of a series?

It’s heroic epic fantasy – think more traditional / less grim and gritty than something like A Game of Thrones, but it’s certainly not the elves, dwarves and dragons of The Lord of the Rings, either. It’s the first book in a trilogy, and my go-to introduction is usually that it’ll appeal to fans of The Wheel of Time and/or Brandon Sanderson’s various series.

I wouldn’t say that there was a single, specific inspiration for the book. I’ve always loved writing, and epic fantasy has been my favourite genre for a long time now, so it was just naturally going to be the one I tried my hand at.

More generally, I think looking to other stories – including genres other than fantasy, and media other than books – is my primary source of inspiration. If I’ve really enjoyed something about a narrative, it’s inevitably going to shape how I look at my own work. On the other hand, if a story has a great concept but I think its execution is lacking, that can inspire me too – I definitely get excited when I see the missed potential of something, and then I think about the way it could be done.

I was fourteen, a big reader but not really into SFF at all.  Then a friend of mine basically harassed me into reading Raymond E. Feist’s Magician. I loved it, got hooked on The Wheel of Time straight after, and never looked back.

I love being a writer! A dream job for me. I’ve been really happy with my experience in the publishing industry thus far, too. I started out self-published and there was a lot of freedom in that, but – particularly as a younger author – you do lose something when you don’t have access to professional feedback. My agent’s been awesome and my editors have been on the same page as me about what we’re trying to get out of the story, so that’s all been perfect as far as I’m concerned.

If I had to pick one thing I wasn’t necessarily enjoying about doing this professionally, it would be having deadlines – but I guess that’s forcing me to figure out how to work faster and smarter, so even those aren’t all bad…

I sit down every weekday on the same schedule and try to write for a set number of hours — no matter whether I’m feeling inspired, or would rather be doing absolutely anything else. I’ve worked for myself almost since leaving university, so fortunately self-discipline isn’t too much of a problem.

When writing drafts, I have a weekly word count that I try to hit — I find that per-day word count targets don’t work well for me because my output can vary wildly, but my good and bad days tend to even out over the course of a week.

On the other hand, when I’m editing, I just make sure I put in the hours rather than giving myself specific goals. That’s because I find that every edit requires a different amount of attention and focus, so it’s much harder to tangibly assess your progress.

I’ve wanted to be an author since I was a kid – I’ve always loved the process of creating stories. My first foray into writing was when I was eight years old, and I titled it The Detective Known as James. It was pretty classy.

As any sort of effort to produce professional-level work, though, The Shadow of What Was Lost was effectively my first attempt… I don’t have any half-finished books or short stories collecting dust, never entered short story competitions, never got published in magazines. But I loved writing Shadow, and it’s already had tremendous self-published success (selling more than 100,000 copies all up), as well as obviously landing me in the situation I find myself today. So I most certainly look back on that experience fondly!

I think the genre’s in a great place at the moment, because there’s enough variety in its newer stories to be catering for all tastes. There were a number of years when I felt fantasy was swinging too heavily towards the gritty, antihero, ‘grimdark’ side of things – GRRM’s success certainly spawned a lot of imitators – but that trend seems to be fading a little now, and more ‘hero’-oriented fantasy authors like Brandon Sanderson and Patrick Rothfuss are coming back to the fore. Their huge recent movie deals are proof enough of that!

Though my work does have plenty of darker moments, it still belongs firmly to that style of traditional, heroic fantasy, so hopefully it can be part of the resurgence in that side of the genre.

All my efforts at the moment are focused on editing the sequel to The Shadow of What Was Lost – it’s called An Echo of Things to Come, and it’s due out next year. After that, it’ll be straight on to Book 3! 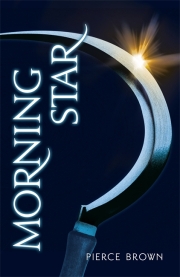 I’m about to read Pierce Brown’s Morning Star, which is the finale of his Red Rising trilogy. I read the first two a while ago, and enjoyed them very much – I’m really looking forward to the conclusion.

The Name of the Wind by Patrick Rothfuss. I think it’s the only book that’s been loved by everyone I’ve ever recommended it to, so it’s hard to go past that sort of success rate.

Despite all the comparisons my book gets to The Wheel of Time – quite correctly, because I loved it growing up and it was absolutely an influence — I’ve been knuckling down and writing since before A Memory of Light came out, so I actually haven’t found time to see how the series finishes yet! I’m hoping to do so sometime soon, though…

Finishing and releasing An Echo of Things to Come. The self-published success of the first book was amazing – life-changing, in fact – but it’s put a lot of pressure on getting the second one into readers’ hands as soon as possible, while also making sure it’s done right. So it’ll be not just exciting, but something of a relief when it’s finally out!

The Shadow of What Was Lost is out now, published by Orbit Books in North America and the UK. An Echo of Things to Come is due to be published in June 2017. Here’s the synopsis for the first novel:

AS DESTINY CALLS, A JOURNEY BEGINS

It has been twenty years since the god-like Augurs were overthrown and killed. Now, those who once served them — the Gifted — are spared only because they have accepted the rebellion’s Four Tenets, vastly limiting their own powers.

As a young Gifted, Davian suffers the consequences of a war lost before he was even born. He and others like him are despised. But when Davian discovers he wields the forbidden powers of the Augurs, he sets in motion a chain of events that will change everything.

To the west, a young man whose fate is intertwined with Davian’s wakes up in the forest, covered in blood and with no memory of who he is…

And in the far north, an ancient enemy long thought defeated, begins to stir.

One thought on “Interview with JAMES ISLINGTON”