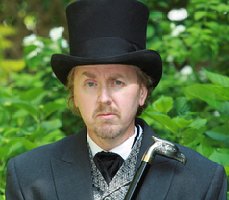 Let’s start with an introduction: Who is Vaughn Entwistle?

I was born in Weston, Ontario, Canada to British parents, but I grew up in Northern England where the Entwistle tribe hails from.

Later, I lived in Seattle, Washington for close to twenty years (and loved it), but when I landed the book deal my wife and I seized the chance to move back to England. As a writer who specializes in historical fiction (much of which takes place in England) it is much easier to carry out research and actually walk the ground of the places I write about.

Currently, my and wife and I live in the ancient city of Wells in the county of Somerset. Most days I take a break from the keyboard to walk the dog on a route that takes us past the 11th century cathedral, through the market place, and along the moat that surrounds the Bishop’s palace, returning home through Vicar’s Close, the oldest street in Europe with all its medieval houses intact. Wells is a wonderful place for a writer to live. Beyond the obvious history, I find something very calming and deeply spiritual about the place.

Your new novel, The Dead Assassin will be published by Titan Books this month. It’s the second book in the series, The Paranormal Casebooks of Sir Arthur Conan Doyle. What can fans of the first book expect for this new book, and how would you introduce it to new readers?

Fans of the first novel, The Revenant of Thraxton Hall, will find themselves on familiar territory. But as many reviewers have noted, it’s not necessary to have read the first book. I constructed the opening of second novel in such a way that new readers are brought up to speed in just a few paragraphs. That said, anyone expecting a straightforward mystery might be knocked a bit off balance. Both novels feature elements of the paranormal and are written to be funny and scary and slightly over the top. (Reviewers often describe them as “a romp.”) Wilde is there to provide wit and a bon vivant’s skewed outlook on the proceedings, while Conan Doyle’s Holmesian mind keeps the plot anchored in reality. END_OF_DOCUMENT_TOKEN_TO_BE_REPLACED