Let’s start with an introduction: Who is Bruce Sterling?

Well, at the present moment, I’m some unshaven guy in his mid-sixties surviving a global pandemic in Ibiza while wearing house slippers, linen pajama pants and a poncho.

Your latest book, Robot Artists and Black Swans, will be published by Tachyon in March 2021. It looks really interesting: How would you introduce it to a potential reader?

It’s a literary conceptual-art piece. I was an American science fiction writer spending time in Italy, so I naturally thought, “I should write some science fiction about Italy!”

But then I surmised: “What kind of science fiction would I write if I myself was Italian?” Then, instead of me peering through a keyhole as a puzzled foreigner, it was like a vast door had opened up into the marbled streets. END_OF_DOCUMENT_TOKEN_TO_BE_REPLACED

Let’s start with an introduction: Who is Elly Bangs?

I’m a Seattle-based science fiction and fantasy author. I’ve been writing stories and novels since I was a kid, but I only started seriously sending my work out into the world in 2017; around that time I was lucky enough to find a day job that lets me scrape by while still leaving me time to write. Since then I’ve had about a dozen stories out in publications including Clarkesworld, Beneath Ceaseless Skies, and Escape Pod. What else? I live with my partner and two cats. I treasure my friendship with my Clarion West class. I enjoy bicycling, tinkering with circuitry, and baking pies — though not at the same time. END_OF_DOCUMENT_TOKEN_TO_BE_REPLACED

Let’s start with an introduction: Who is Wayne Santos?

The simplest, one-line answer is “Canadian-Filipino Gen-X Geek.” That sums up everything in a nutshell. I’m a second-generation Filipino that grew up in Edmonton, Alberta, which some refer to as “Texas North.” I’m a child of the 80s, so I was there when Neuromancer made its debut, everyone was flipping out over Blade Runner, and I did watch The Empire Strikes Back and Return of the Jedi in the theatre. I also did time rolling four, six, ten, and 20-sided dice in Dungeons & Dragons and other tabletop role-playing games, and, yes, we did it in the basement.

But I also graduated out of university and then spent the next 13 years or so living and working in Southeast Asia, specifically Singapore. That was an eye-opener, since I looked Southeast Asian, but had a North American accent, and sensibility, so it was confusing for everybody. It was a weird feeling to grow up looking like a minority, but not feeling like one, because I shared the same culture as everyone else. Then move to another country and switch to not looking like a minority, but feeling like one, because I culturally did not belong in this world, but no one knew it as long as I kept my mouth shut. END_OF_DOCUMENT_TOKEN_TO_BE_REPLACED 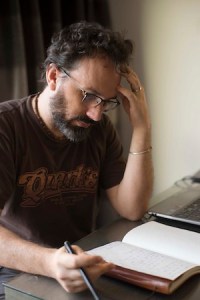 Let’s start with an introduction: Who is T. R. Napper?

My website has, as a subheading: “writes, plays poker, smashes poverty with his bare hands.” This is a decent summary.

The last, obviously ironic reference, is to my previous career as an aid worker in Southeast Asia. I worked on projects that delivered basic education to some of the poorest communities in places like Laos and Burma, where children would never otherwise have set foot inside a school.

I did once play a lot of poker, I was what you’d call a ‘semi-professional’, meaning I derived part of my income from cards. I quit for a few years, but just recently got back into it with gusto.

These days I work in the community sector with ‘at risk’ teenagers and with people living with autism. I’m a professional dungeon master, as well. END_OF_DOCUMENT_TOKEN_TO_BE_REPLACED 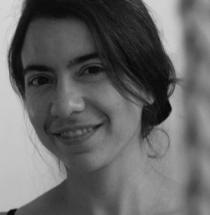 Infomocracy takes place across 17 different locations, only one of them in the United States. This is largely a function of the fact that, as someone who worked or consulted for international organizations for years, that was what my life was like. Over one ten month period in 2011-2012, I went to eleven different countries – three of them twice. So it made sense to me, while I was writing, that activists, anarchists, and political operatives working on a global election would have a similar itinerary. END_OF_DOCUMENT_TOKEN_TO_BE_REPLACED

The second excerpt of the week (after Al Robertson’s Crashing Heaven). Published in the UK yesterday by Gollancz, Steeple is the sequel to Jon Wallace‘s well-received Barricade. Here’s the synopsis:

Do Androids Dream of Electric Sheep meets The Raid in this high action SF thriller.

Another high action SF dystopia perfect for fans of Richard Morgan and Alfred Bester alike. The follow-up to the acclaimed Barricade this another short, sharp and kinetic SF thriller

Kenstibec is a Ficial – a genetically engineered artificial life form; tough, skilled, hard to kill. Or at least he was. He’s lost the nanotech that constantly repaired him. Life just got real. Just like it is for the few remaining humans in this blighted world – the Reals; locked in a fight over a ruined world with the Ficials they created to make Utopia.

And now Kenstibec must take a trip to the pinnicle of our failed civilisation. The Steeple is a one thousand storey tower that looms over the wreckage of London. It is worshipped, feared and haunted by attack droids and cannibals. And the location of a secret that just might save Kenstibec’s life.

The only way is up. END_OF_DOCUMENT_TOKEN_TO_BE_REPLACED

Al Robertson‘s Crashing Heaven is one of my most-anticipated novels of 2015. I’ve heard great things, too. In advance of a review, Gollancz have sent me this excerpt to share with you all. First up, though, the novel’s synopsis:

Meet Hugo Fist. The most terrifying and enticing AI to grace SF since the works of Al Reynolds and Hannu Rajaniemi

With Earth abandoned, humanity resides on Station, an industrialised asteroid run by the sentient corporations of the Pantheon. Under their leadership a war has been raging against the Totality – ex-Pantheon AIs gone rogue.

With the war over, Jack Forster and his sidekick Hugo Fist, a virtual ventriloquist’s dummy tied to Jack’s mind and created to destroy the Totality, have returned home.

Labelled a traitor for surrendering to the Totality, all Jack wants is to clear his name but when he discovers two old friends have died under suspicious circumstances he also wants answers. Soon he and Fist are embroiled in a conspiracy that threatens not only their future but all of humanity’s. But with Fist’s software licence about to expire, taking Jack’s life with it, can they bring down the real traitors before their time runs out?

The novel is published in the UK on June 18th (tomorrow!). Now, on with the extract… END_OF_DOCUMENT_TOKEN_TO_BE_REPLACED

I was spending some time on Goodreads, recently (as you do), and I noticed that Jeff Somers wrote in a number of genres. On the face of things, that is not at all a groundbreaking discovery. But, given the publishing industry’s preference for author branding, I thought it was interesting that Somers wrote under the same pen-name for all of the genres. Again, not exactly an earth-shattering discovery, but it gives me the opportunity to feature his work on the blog, before I get around to reading any of it. So, without further ado…

Author Bio: “Born in Jersey City, N.J., Jeff Somers has managed to migrate just five minutes away to nearby Hoboken, land of overpriced condominiums and a tavern on every corner. Between weekly drunks, Jeff manages to scrawl enough prose onto cocktail napkins and toilet paper to keep up a respectable fiction career.”

In the near future, the only thing growing faster than the criminal population is the Electric Church, a new religion founded by a mysterious man named Dennis Squalor. The Church preaches that life is too brief to contemplate the mysteries of the universe: eternity is required. In order to achieve this, the converted become Monks – cyborgs with human brains, enhanced robotic bodies, and virtually unlimited life spans.

Enter Avery Cates, a dangerous criminal known as the best killer-for-hire around. The authorities have a special mission in mind for Cates: assassinate Dennis Squalor. But for Cates, the assignment will be the most dangerous job he’s ever undertaken – and it may well be his last.

Magic uses blood — a lot of it. The more that’s used, the more powerful the effect, so mages find “volunteers” to fuel their spells. Lem, however, is different. Long ago he set up a rule that lets him sleep at night: never use anyone’s blood but your own. He’s grifting through life as a Trickster, performing only small Glamours like turning one-dollar bills into twenties. He and his sidekick, Mags, aren’t doing well, but they’re getting by.

That is, until they find young Claire Mannice — bound and gagged, imprisoned in a car’s trunk, and covered with invisible rune tattoos. Lem turns to his estranged mentor for help, but what they’ve uncovered is more terrifying than anybody could have imagined. Mika Renar, the most dangerous Archmage in the world, is preparing to use an ocean of blood to cast her dreams into reality — and Lem just got in her way.

Mary and Bickerman are the center of their circle of friends – but these friends are strangers as well as family to them. In the course of year, under the influence of a stressful wedding and a whole lot of alcohol, relationships and nerves are twisted and broken as the dynamics of the cozy-seeming group shift. Secrets are kept, emotions withheld, and it doesn’t look like it’s going to end well for anyone.

Told always in first person, but not the same person, and unfolding in double-helix chronology that provides a “Rashomon”-like narration, “Chum” is the story of love, liquor, and death.

Three twenty-something guys, who transitioned from collegiate underachieving to corporate bottom feeding sketch out a plan to make a grab for some dignity. They will rob the publishing house that employs their only stable member and results him on a daily basis. Being the bright, perceptive fellows they are, they all quickly realize it’s about the money.

For Phil “Dub” Dublen, it’s a pissed off statement against a dull, meaningless job. For self-styled poet Trim, it’s a chance to actually be outrageous and anarchic as he needs to be. For Trim’s roommate Dan, it seems to be something he does for the same reason he does everything: to vent some anger, having nothing better to do. By the time their master plan is all said and done, nothing has been solved, nothing is better, and nothing, really, has changed. And, in the slightly fractured wisdom of the larcenous trio, this surprises none of them.

Who’s read any of these? I’ve picked up TRICKSTER and LIFERS, and intend to read them ASAP. Any other multi-genre authors you like? Or any you would like me to feature on the blog in either a post like this, or as reviews?