The third novel in Timothy Zahn‘s rebooted Thrawn trilogy is out later this month! An enduring, fan-favourite character from the Star Wars Expanded Universe (he was introduced in 1991’s Heir to the Empire), the character was revived in Thrawn (2017).

Set within the new canon, the new series has been popular and fans have welcomed the return of the cold, calculating and brilliant Empire Admiral. In Thrawn: Treason, Zahn brings the trilogy to an end. Here’s the synopsis:

Grand Admiral Thrawn faces the ultimate test of his loyalty to the Empire in this epic Star Wars novel from bestselling author Timothy Zahn.

Such was the promise Grand Admiral Thrawn made to Emperor Palpatine at their first meeting. Since then, Thrawn has been one of the Empire’s most effective instruments, pursuing its enemies to the very edges of the known galaxy. But as keen a weapon as Thrawn has become, the Emperor dreams of something far more destructive.

Now, as Thrawn’s TIE defender program is halted in favor of Director Krennic’s secret Death Star project, he realizes that the balance of power in the Empire is measured by more than just military acumen or tactical efficiency. Even the greatest intellect can hardly compete with the power to annihilate entire planets.

As Thrawn works to secure his place in the Imperial hierarchy, his former protégé Eli Vanto returns with a dire warning about Thrawn’s homeworld. Thrawn’s mastery of strategy must guide him through an impossible choice: duty to the Chiss Ascendancy, or fealty to the Empire he has sworn to serve. Even if the right choice means committing treason.

To celebrate the release of the novel, Zahn’s UK publisher, Century, is holding a special giveaway for everyone who pre-orders the novel. If you send proof of the pre-order through this form, they will send you a special edition pin. (They did something similar for the release of Thrawn: Alliances.)

The novel is due to be published by Century in the UK (July 25th) and Del Rey in North America (July 23rd).

Further Reading: Interview with Timothy Zahn on The Verge (2018)

Because I’ve been scaling back the amount of time I spend online (especially Twitter and other social media platforms), I managed to miss the fact that it Star Wars Celebration was on at the moment (started yesterday, runs until April 16th). END_OF_DOCUMENT_TOKEN_TO_BE_REPLACED 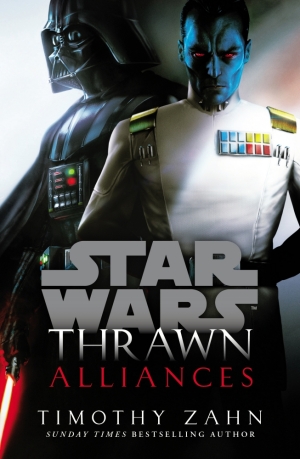 Timothy Zahn‘s Thrawn novels are considered many to be among the best (if not the best) of the original Expanded Universe (now “Legacy”) Star Wars novels. The author has brought this fan-favourite character into the new Star Wars canon in Thrawn, and now Thrawn: Alliances. Here’s the synopsis:

“I have sensed a disturbance in the Force.”

Ominous words under any circumstances, but all the more so when uttered by Emperor Palpatine. On Batuu, at the edges of the Unknown Regions, a threat to the Empire is taking root — its existence little more than a glimmer, its consequences as yet unknowable. But it is troubling enough to the Imperial leader to warrant investigation by his most powerful agents: ruthless enforcer Lord Darth Vader and brilliant strategist Grand Admiral Thrawn. Fierce rivals for the emperor’s favor, and outspoken adversaries on Imperial affairs — including the Death Star project — the formidable pair seem unlikely partners for such a crucial mission. But the Emperor knows it’s not the first time Vader and Thrawn have joined forces. And there’s more behind his royal command than either man suspects.

In what seems like a lifetime ago, General Anakin Skywalker of the Galactic Republic, and Commander Mitth’raw’nuruodo, officer of the Chiss Ascendancy, crossed paths for the first time. One on a desperate personal quest, the other with motives unknown . . . and undisclosed. But facing a gauntlet of dangers on a far-flung world, they forged an uneasy alliance — neither remotely aware of what their futures held in store.

Now, thrust together once more, they find themselves bound again for the planet where they once fought side by side. There they will be doubly challenged — by a test of their allegiance to the Empire… and an enemy that threatens even their combined might.

Thrawn: Alliances is due to be published next week in the UK by Century and in North America by Del Rey.

The publisher is currently running a pre-order promotion, too! If you pre-order the novel, and fill out this form, then they will send you a replica-pin of Thrawn’s rank insignia (below). Which is rather nifty. 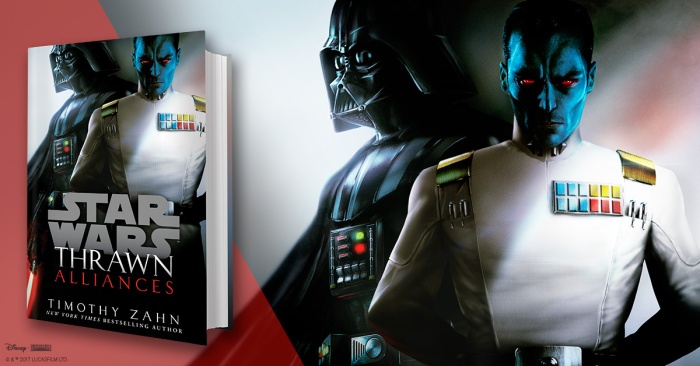 The promotional blizzard for The Force Awakens was incredible. Actually, it was probably excessive. It ultimately left me a little disappointed with the movie on first viewing — my expectations had been ratcheted up so high that it was pretty much guaranteed that the movie wouldn’t live up to my hopes.

Now, we have the trailer for the eighth episode in saga. I’m really looking forward to this. I’m going to make a better effort at just waiting for the movie to come out, rather than consume all the coverage. Crossing fingers… 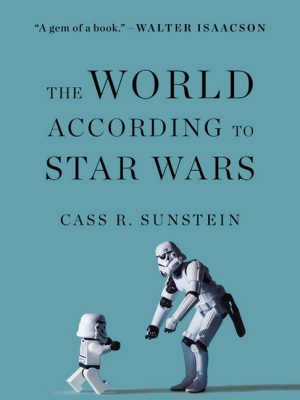 Just spotted this on Harper Collins UK’s website, and thought it looked interesting. Cass R. Sunstein is a law professor at Harvard, and also worked for the Obama administration during the first term. I’m familiar with some of Sunstein’s scholarly work, and I think it’ll be interesting to see what he has to say about Star Wars. Here’s the synopsis:

An original celebration of George Lucas’s masterpiece as it relates to history, presidential politics, law, economics, fatherhood, and culture by a Harvard legal scholar and former White House advisor

There’s Santa Claus, Shakespeare, Mickey Mouse, The Bible, and then there’s Star Wars. Nothing quite compares to sitting with down with a young child and hearing the sound of John Williams’ score as those beloved golden letters fill the screen. In this fun, erudite and often moving book, Cass R. Sunstein explores the lessons of Star Wars as they relate to childhood, fathers, the Dark Side, rebellion, and redemption. As it turns out, Star Wars also has a lot to teach us about constitutional law, economics, and political uprisings.

In rich detail, Sunstein tells story of the films’ wildly unanticipated success and what it has to say about why some things succeed while others fail. Ultimately, Sunstein argues, Star Wars is about the freedom of choice and our never-ending ability to make the right decision when the chips are down. Written with buoyant prose and considerable heart, The World According to Star Wars shines new light on the most beloved story of our time.

The World According to Star Wars is due to be published on May 31st in the US and Canada, and June 2nd in the UK. I’m looking forward to reading this book. 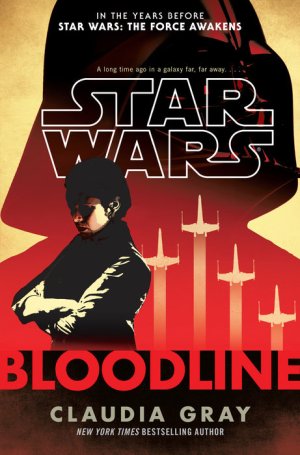 As I’ve mentioned before on CR, I have read a lot of Star Wars fiction in the past. Recently, though, I haven’t really liked any that I’ve tried. Claudia Gray‘s Bloodline, however, sounds like it could be good. Set before The Force Awakens, here’s what it’s about:

WITNESS THE BIRTH OF THE RESISTANCE

When the Rebellion defeated the Empire in the skies above Endor, Leia Organa believed it was the beginning to a lasting peace. But after decades of vicious infighting and partisan gridlock in the New Republic Senate, that hope seems like a distant memory.

Now a respected senator, Leia must grapple with the dangers that threaten to cripple the fledgling democracy — from both within and without. Underworld kingpins, treacherous politicians, and Imperial loyalists are sowing chaos in the galaxy. Desperate to take action, senators are calling for the election of a First Senator. It is their hope that this influential post will bring strong leadership to a divided galaxy.

As the daughter of Darth Vader, Leia faces with distrust the prospect of any one person holding such a powerful position — even when supporters suggest Leia herself for the job. But a new enemy may make this path Leia’s only option. For at the edges of the galaxy, a mysterious threat is growing…

Bloodline is due to be published by Del Rey in the US, on May 3rd, 2016. Gray also wrote Lost Stars, part of the YA Journey to Star Wars: The Force Awakens series.

In this second edition of Turn Back 10, I’m taking a look at an early Star Wars novel review. In the first few months of CR, I read and reviewed a lot of Star Wars fiction. Not long before I started the blog, I had picked up a couple of newer novels in the series, having stepped away for quite some time. I can’t remember what it was that made me re-start, but I did and I got sucked into it in a big way.

They were among some of the first novels I received from a publisher for review. I think this may have coloured my reviews — I didn’t lie about what I liked, but I think I did (in the very early months) focus more on what I liked than what I didn’t. I don’t think I am alone among reviewers to have done that, not that I would ever recommend it. I also think I read many of the Star Wars novels while still in the glow of renewed fandom. This loyalty would slowly wane as ever-more novels in ever-more convoluted series-within-series were published. My interest in reading SW novels cratered in 2013, as I tried four and finished none. With the The Force Awakened behind us, and a new era in SW fiction and movies upon us, though, who knows if my interest will be reignited?

Anyway, here’s my review of Betrayal by Aaron Allston — the first in the nine-book Legacy of the Force series — from a time when the now-“Legends” novels were still pretty great…

This is the era of Luke Skywalker’s legacy: the Jedi Master has unified the order into a cohesive group of powerful Jedi Knights. However, as this era begins, planetary interests threaten to disrupt this time of relative peace and Luke is plagued by visions of an approaching darkness.

Melding the galaxy into one cohesive political whole after the savage war with the Yuuzhan Vong is not the easiest task, and already some worlds are chafing under the demands of the new government. Civil war may be brewing, and the Skywalker-Solo clan find that they might not all be on the same side. Meanwhile, evil is rising again — out of the best intentions — and it looks like the legacy of the Skywalkers may come full circle…

Betrayal is the beginning of the latest Star Wars series, which ushers in (yet another) dark time for Luke Skywalker and his expanding clan of family and friends. This time, the darkness doesn’t come from beyond the galactic rim. This time, its source is far closer to home. END_OF_DOCUMENT_TOKEN_TO_BE_REPLACED

Another great trailer. Excitement continuing to ramp up…