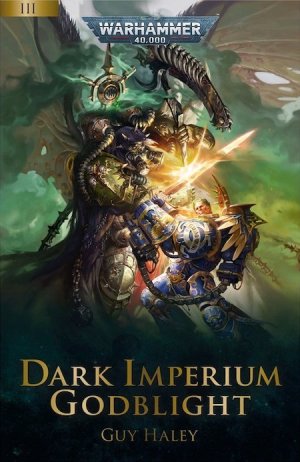 The paths of Roboute Guilliman and his fallen brother Mortarion bring them inexorably together on Iax. Once a jewel of the Imperium, the garden world is dying as the plans of the Lord of Death to use it as a fulcrum to drag the stellar realm of Ultramar into the warp come to deadly fruition.

While Guilliman attempts to prevent the destruction of his kingdom, Mortarion schemes to bring his brother low with the Godblight, a disease created in the Cauldron of Nurgle itself, made with the power to destroy a son of the Emperor.

Primarchs clash on the ravaged landscapes of Iax. The gods go to war and the wider galaxy balances on a knife-edge of destruction. As something powerful stirs in the sea of souls, only one thing is certain – no matter who wins the last great clash of the Plague War, the repercussions of victory will echo through eternity…

The long-awaited conclusion to the Dark Imperium trilogy. I’ve been looking forward to this novel for quite some time, eager to learn what happens when Guilliman finally confronts his fallen brother Mortarion. Offering a good balance between world-building, character development, and action, this was worth the wait. I really enjoyed this.

I’ve only read the original versions of Dark Imperium and Plague War, so I can’t speak to how much the two novels have been changed. I can say, though, that I didn’t feel at all lost when reading Godblight. The novel drops us right into the story, with some now-familiar faces. There probably are a few things that I maybe missed or didn’t recognize the significance of because I haven’t read the new versions of the first two books, but it didn’t ruin my enjoyment of the final book.

If you’re a fan of WH40k fiction, then this series is a must-read. Like the Dawn of Fire series, it moves the overall meta-story forward, and brings together the setting’s “current” and Horus Heresy mythology together. With Guilliman one of the only characters that bridges the two periods (Cawl being the other, but he’s not in this book), it has been really interesting seeing how he reconciles his Crusade/Heresy-era beliefs with that of the 41st millennium and the very different Imperium he now finds himself leading. In particular, the place of religion in his new reality, compared with the overtly, violently secular era of his birth. There are some really good sections in the novel in which Guilliman discusses the nature of religion in the 41st millennium, and also the nature of the Emperor — something he struggles with, but also something that is challenged on a near-daily basis. The denouement of the novel, in particular, suggests something far bigger is going on, but Haley is careful to sew some seeds of doubt at the same time as “explaining” both possibilities. There’s a particularly interesting discussion between Guilliman, one of his psychic council, and an Eldar farseer. At one point, the latter says, on the nature of the Emperor:

‘We are talking here not of sorcery, or what you refer to as psychic power, but of faith. Faith is the most powerful force in this galaxy. It requires no proof to convince. It grants conviction to those who believe. It brings hope to the hopeless, and where it flourishes, reality changes. A single mind connected strongly to the warp can bend the laws of our universe, but a billion minds, a trillion minds, all believing the same thing? It matters little if they are psykers or not. The influence of so many souls has a profound effect. My kind birthed a god. Perhaps now it is your turn…’

There are some really tantalizing hints about what might be happening in the setting, specifically with regards to what is and has happened to the Emperor since his internment in the Golden Throne. Of course, this being Black Library, some of it is maddeningly vague — and, if I’m honest, I don’t expect us to get any answers in the near-future. But it would be nice if we did…

‘The Emperor smashed every idol He came across. He threw down churches and temples, even the meanest shaman’s hut was burned to the ground. We were commanded to destroy every sign of religion we found. Iterators stood in the ashes of belief and spread the Imperial Truth. The Emperor would brook no cult but that of reason…. reason is a faith of its own, with its own traps and heresies. I have not fallen into worship. Lorgar’s arguments are persuasive, but are built on several fallacies for all that. The Emperor said Himself that He was no god, over and over again. You should have seen Him when He commanded me to punish Lorgar. His anger was no sham. I cannot see any situation in which He would be happy with the way the Imperium has turned out.’

The novel picks up a number of ongoing threads and themes from the previous two novels as well as other books set post-Great Rift. For example, we get more on Guilliman’s focus on preserving history, as well as creating a true history of the Imperium — an attempt to neuter myth, legend, and reflect reality more closely (perhaps separate from politics, but really all history is political). However, his appointed chronicler, Fabian, finds his curiosity and concern heightened when he is barred entry to certain documents and a specific library. (There are some tantalizing hints towards the end of the novel as to where his story might be going, again tied back to events from the Horus Heresy…) Fabian’s story is one of my favourite parts of this trilogy, and I hope we haven’t seen the last of him.

The novel also includes a little bit more on Guilliman’s place in the current Imperium, the forces arrayed against and behind him; as well as the peculiar line he has to walk in public, when addressing the more zealous members of the Adeptus Ministorum — one of whom, Militant-Apostolic Matthieu, is a frequent thorn in the Primarch’s side. Finally, another continued thread is the changing relationship between the original Space Marines and the Primaris — especially as many of the former cross the Rubicon and become Primaris.

A tension stretched the air. Wherever the Adeptus Astartes went, violence was not far behind. There was no hatred between them, but there was an aggressive curiosity. Both groups wished to test themselves against the other.

Given the pandemic world we are currently living in, there was something that jumped out at me in Godblight. The Imperial forces are battling those of Mortarion and the Plague God Nurgle. The planet (well, the whole system) is rife with plague, rot, sickness, supernatural blights, and more. And yet, there’s this moment, when a character tries to get into a briefing with Guilliman and the planet’s other leadership:

‘These damned illnesses that come among us from the enemy’s camp,’ said Tefelius. ‘It is nothing. A mild fever. Half the population is ill here at any time.’

The Aurora Marine looked at him carefully. ‘Make sure you are examined by a medicae at the first opportunity. We have experience of the Death Guard’s diseases. The most minor of symptoms can be a sentence of death.’

It was a little strange that the Space Marines protecting the Primarch are apparently less cautious about preventing the spread of disease when fighting the forces of Nurgle than are store managers during the time of COVID… It’s just something that amused me.

If you enjoyed the first two books in the series, then you should absolutely read Godblight. If you haven’t read any of the trilogy’s novels, yet, then I’d recommend you start with the new editions — I’m sure you’ll blitz your way through them all pretty quickly. Continuing in a manner that Haley has set in the first two novels as well as in his other recent WH40k fiction, Godblight is a well-balanced story that increases readers’ understanding of the setting and certain leading characters, as well as delivering an entertaining and gripping science fiction action tale. Definitely recommended.

Guy Haley’s Godblight is out now, published by Black Library in North America and in the UK.

Also on CR: Interview with Guy Haley (2015); Reviews of Dark Imperium, Plague War, Avenging Son, The Great Work, Dante, The Devastation of Baal, Darkness in the Blood, Pharos, Perturabo, Wolfsbane, Corax, Konrad Curze, and The Lost and the Damned