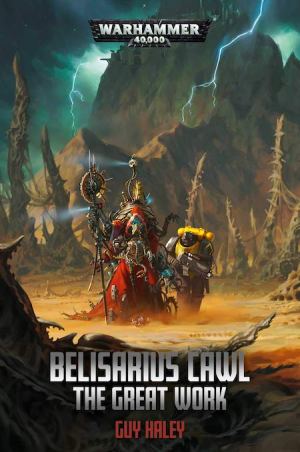 A glimpse into the mind of Belisarius Cawl…

In the wake of the Great Rift, Belisarius Cawl turns his attention to the abandoned world of Sotha. Once home to the Scythes of the Emperor, it also hides a long-buried secret… and an ancient evil.

Belisarius Cawl, Archmagos Dominus of the Adeptus Mechanicus is the most brilliant mind alive. For 10,000 years he has furthered the cause of mankind, working under the aegis of the Emperor and Lord Commander Roboute Guilliman to prevent the inexorable march of the alien and the traitor. Many call him heretic, but all must recognise the magnitude of his achievements, for who else but he was entrusted to create a new generation of Space Marines? Who else but the great Belisarius Cawl could even accomplish such a task?

Now, in the wake of the Great Rift and the Indomitus Crusade, his ambitions bring him to the long-dead world of Sotha, once home to the Scythes of the Emperor, now a barren wasteland devoured by the vile Tyranids. Accompanied by Tetrarch Felix and his elite warriors, it is here that Cawl believes the lynchpin of his mysterious Great Work lies. But uncovering it is a near impossible task, one in which the Archmagos must overcome an ancient evil that threatens to extinguish the last hope of humanity.

Guy Haley continues moving the WH40k story forward, with this fascinating story centred around Archmagos Belisarius Cawl. Is he a heretic? Is he the Imperium’s greatest champion? What has he been up to since the Horus Heresy? What is he up to on Sotha? In The Great Work, we follow Cawl and a force of loyal Primaris and Space Marines to Sotha, and a reawakening Pharos… I thoroughly enjoyed this novel.

Belisarius Cawl is one of the most interesting new characters created for the WH40k universe. While he is a relatively new creation, his history dates back before the Horus Heresy. If you’ve been following the Horus Heresy series, you will have spent some time with him during his early years as a tech adept. In The Great Work, we learn more about his past: spanning from when he was first selected to join the Mechanicum, to his growing prominence and mastery of everything technological. As he and his allies explore Sotha and the abandoned Pharos, there is a strange effect that forces them all to relive certain memories. For Cawl, who has lost many of his memories (among other psychic/mental issues) this offers a fascinating insight.

‘I strive for perfection in the eyes of the Machine-God. I have yet to attain it. I do better than most though.’

Cawl is clearly rather mad, and his strange psyche and nature (I’m not going to spoil anything from the book, so just go with it) makes him quite a whimsical character and, one can only imagine, maddening to be around. Cawl continues to see the Primaris as a successful experiment and in a somewhat fatherly manner — “Good service records. Excellent function. They turned out rather well, don’t you think?” he observes at one point.

‘I do not know what he is doing. I can only apologise,’ said Alpha Primus. ‘What more can I do? Belisarius Cawl is as Belisarius Cawl does. He is the Prime Conduit of the Omnissiah, a law unto himself.’

Alpha Primus is, likewise, an interesting new addition to the setting: the prototype for the new Primaris marines, he is an incredibly impressive warrior. Where the Primaris were given incredible gifts by Cawl, Alpha Primus “was given more than most” — “I am your prototype, and living evidence of his overreach,” he tells Felix at one point. He’s an understandably sad character, effectively enslaved to remain by Cawl’s side until he dies and resigned to his fate (“I don’t serve him. I belong to him”).

If you’ve read Haley’s Dark Imperium novels, the first to move the WH40k story forwards, then you’ll recognize some of the characters who appear in The Great Work. Specifically, Tetrarch Felix, a Primaris marine with clear and troubling memories of his time in Cawl’s labs, and his transformation into a Primaris. He clearly hates Cawl in so many ways, and their exchanges are fascinating to read. He also recognizes that he owes his existence to Cawl, and all of his impressive and magnificent tech is almost all the result of Cawl’s genius. If only he wasn’t such a dick to be around…

As with other recent WH40k novels, there are nods and references to events of the Horus Heresy series — in this case, the Pharos and Haley’s novel of the same name. As I’ve mentioned in my reviews of the Dark Imperium novels, there is also more examination of and comparison between the “present” and Heresy era, and how far the Imperium has come, what it has suffered, and its obvious flaws and weaknesses. (Many of which, Cawl believes, only he can fix.) There is also some discussion of the nature of religion, and the Heresy-era atheism conflicting with the contemporary zealotry. Through his characters, Haley also examines aspects of the Imperium, and technology and humanity’s relationship with it — how it is often horrific and brutal by our real-world standards (in particular, Felix’s memories of his Primaris apotheosis). One additional thing to note about the novel — the Necrons in this novel are more creepy and sinister than some of the more-recent portrayals (for example, in Revenant Crusade and Severed).

I had to resist quoting a number of great exchanges between Cawl and various other characters — in part to avoid spoilers, but also because you’ll get the full impact if you read the novel for yourself. Haley has done a fantastic job with this novel and the other Dark Imperium books: adding layers to our understanding of the setting, moving the story forward, and seeding mysteries and hints for what might be to come. This novel is populated with interesting new and returning characters, and plenty of good action. For me, the most interesting sections are those that fill in some of the setting’s history, and in particular the scenes that fill in our picture of Cawl and the events that have brought him to where he is now.

I very much enjoyed reading this novel, and learning more about these characters. I really hope there are plans in place for Haley to write more novels starring those characters who survive this expedition. Definitely recommended to all fans of the WH40k franchise. I really enjoyed this.

Guy Haley’s The Great Work is out now, published by Black Library in North America and in the UK.

Also on CR: Reviews of Pharos, Wolfsbane, Perturabo, Corax, Konrad Curze, The Lost and the Damned, Dante, The Devastation of Baal, Plague War