Skip to content
HomeQuick Review: THE LOST AND THE DAMNED by Guy Haley (Black Library) 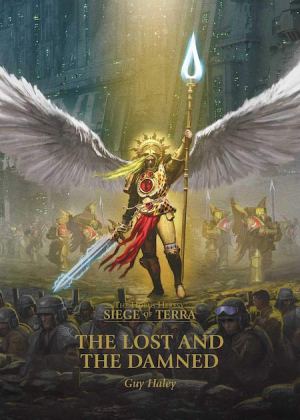 The Siege of Terra begins in earnest…

The Solar War is over. The Siege of Terra has begun. As the Traitors unleash their deadliest weapons, the defenders of the Throneworld face nightmare and plague – but Terra must stand.

On the thirteenth day of Secundus, the bombardment of Terra began. With the solar defences overcome through the devastating strength of the Traitor armada and the power of the warp, Horus launches his assault on the Throneworld in earnest. After withstanding a ferocious barrage of ordnance, an immense ground war commences outside the Palace with every inch gained paid for in the lives of billions. The front lines are beyond horrific and the very air is reduced to poison and blood. Bodies are thrown into the meat grinder but the outer redoubts cannot possibly hold for long, even with the loyal primarchs to reinforce them. For Horus has his own generals to call upon. Between the plague weapons of Mortarion and the fury of Angron, the defenders face a losing battle.

The final stages of the Horus Heresy continue, in this engaging second novel in the Siege of Terra series. Haley packs a lot into this novel, as he moves the story forward, fills in some gaps, and sets the stage for the continuing siege. I really enjoyed this.

There’s a lot that I could write about this novel. Haley does a fantastic job of not only keeping the action coming, but also expanding the overall story of the Heresy and its main players. The author gives us plenty of new revelations about certain key players, and also starts laying the groundwork for the post-Heresy storyline(s). In many ways, I found these to be the most important aspects of the novel, and I’ll return to them in a bit.

The Lost and the Damned starts with a few short chapters and scenes to introduce us to the main players in the novel, on both sides of the war. On the loyalist side, we have the Primarchs Dorn, Sanguinius and the Khan; as well as Malcador the Sigillite and Valdor. These legends of the era grapple with the strain of the traitors’ siege on Terra and specifically the Palace. Haley focuses much of the action in the story on a (relatively) small section of the battlefield — as he suggests in the author’s note at the end of the novel, the scale of the Imperial Palace is such that to cover it all would have been nigh-impossible.

In addition to these already famous names, Haley introduces us to a handful of the rank-and-file, each of whom we will follow for as long as possible as the first waves of the siege unfold. Most prominently, Katsuhiro, a conscript on the frontlines. Through him, we get to experience many of the horrors of the ground war — the first waves of mutants and dispossessed, the ferocious charges of the World Eaters, the sinister chem-weapons of the changed Death Guard (we also get to see Mortarion in his new daemon aspect for the first time). We also see the effect of the Primarchs on the loyalist mortals. We also see at times the cold humanity of the Space Marines, as the Primarchs attempt to balance their responsibilities to the people with the tactical realities of warfare on this scale and with these stakes. There is some tension between the brothers (Dorn is becoming increasingly cold and ruthless), but ultimately they are able to make it work and utilize their best traits and skills for the war effort.

There is an excellent, very useful scene in which Dorn, Sanguinius, the Khan and Malcador discuss the disposition of their brothers. It’s a good reminder that we, the readers, know far more than those in the story. The Sigillite reveals certain truths that had been kept from the Primarchs, and confirms or contradicts some of their beliefs related to their brothers. Mistakes are admitted, Horus’s machinations become more clear, and the loyalists precarious position outlined. Of the 17 Primarchs still alive, there are only three on Terra, and it’s unsurprising that they are feeling the strain.

‘Six against three,’ said Sanguinius. ‘Where are the rest of those loyal to the Throne?’

Meanwhile, Horus’s forces are arrayed in orbit above Terra. For most of the novel, his fleet is engaged in a relentless bombing campaign across the globe. While Horus attempts to weaken the Emperor’s psychic protections on the planet (which are preventing the daemon primarchs from landing), he must keep his brothers in check: since four of them have been risen to daemonhood, they have become rather difficult to manage. (This was also covered, in part, in Slaves to Darkness.)

Most of the traitors’ story is presented from Abaddon’s perspective, and it is his part in the novel that I found most interesting. Events are clearly progressing in such a way that the First Captain’s fate is already starting to form. Weakened by his most recent actions prior to the Siege, Horus’s time is running out. If he is unsuccessful, the Pantheon will need to find a new champion. Abaddon’s contempt for many of his fellow traitors (especially the Primarchs who have given themselves totally to specific powers) is palpable.

‘Look at how weak you have become,’ Abaddon said in disgust. ‘Lord Perturabo, you sit at the edge of the system pronouncing your genius and implying no one heeds you. This behaviour is not worthy of you.’

‘Do not provoke me, First Captain.’

‘Be quiet a minute, or you will find yourself further goaded,’ Abaddon snarled. ‘You, Fulgrim, and you, Angron, have whored yourselves out to the gods in the warp.’

Through Abaddon’s eyes, we are shown how weak are the links between the various Traitor Legions. Wholly consumed by their own agendas, weaknesses, obsessions, and insecurities they bicker and squabble throughout. There is little trust between them, and with Horus distracted, things don’t always go smoothly.

I could easily write a lot more about this novel. Haley also writes about the continuing struggle and devolution of the World Eaters — rapidly falling to Khorne, losing cohesion and rationality, all while trying not to fall to the sword of their ever-raging Primarch. There’s an interesting solution to Angron’s impatience, which provides a short reprieve for Khârn and those few are keeping it together(ish) before the ground war proper begins. There is also a thread related to agents of the Alpha Legion.

Haley has done a fantastic job of drawing in lots of threads from throughout the Heresy series, and also bringing back some fan-favourite characters (the Painted Count, for example). An excellent continuation of the Siege of Terra story, Haley skillfully avoids the pitfalls that often befall novels that fall within a series. The Lost and the Damned is not marking time between Big Events. It provides key details for various key players in the overall story. Haley does a fantastic job of maintaining the pace, and balancing the action with the story and character development. While at times he seemed a little too fond of metaphors and simile (especially at the beginning), his writing is top-notch. He does a great job of writing about what is happening on the various battlefronts, and the experiences of those who are there — the indomitable Astartes, the Primarchs, the terrified humans.

A must read for anyone who has been following the Horus Heresy story. Definitely recommended.

Guy Haley’s The Lost and the Damned is out tomorrow, published by Black Library.