Let’s start with an introduction: Who is Corey J. White?

I live in Melbourne, Australia, and I enjoy scotch and playing with the cat. When I’m not writing, I work in education for an Australian retailer and publisher. I’m not particularly interesting on paper, but my mum thinks I’m cool.

Your debut novella, Killing Gravity, will be published by Tor.com. It looks pretty awesome: How would you introduce it to a potential reader? Is it part of a series?

Killing Gravity follows Mars Xi, the most powerful space witch in the galaxy, and her experimental, cat-like pet named Seven. Mars has the ability to kill you with her mind — and if you cross her she’ll do exactly that. She wants little more than peace, but finds herself on a path toward answers and, inevitably, revenge against MEPHISTO — the military research group that made her what she is.

Or if I wanted to be reductive, I could say it’s like The Force Awakens, but where Rey is damaged and merciless, with the psychic powers of Akira‘s Tetsuo. 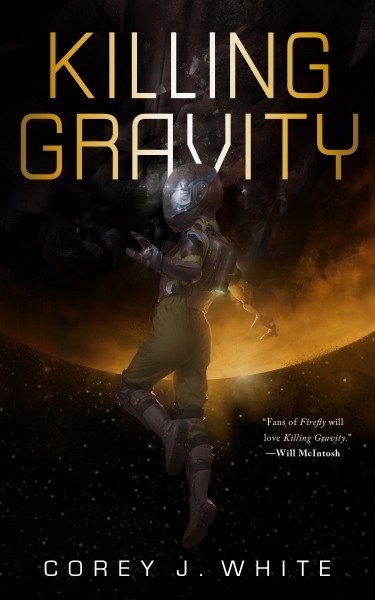 And yes, Tor.com Publishing already bought a Killing Gravity sequel, which I finished writing just before Christmas, and which will soon be off to my editor Carl Engle-Laird. I’d been hoping to get the full story wrapped up in two novellas, but when I sat down to write the sequel, my outline fell apart and I had to start from scratch. So now there’s more for me to explore in a third book, just as long as the first two do well enough to warrant it. 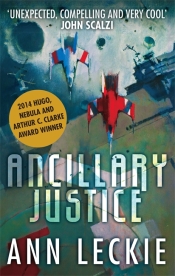 The initial seed for Killing Gravity came from reading Ann Leckie’s Ancillary Justice. As I read the book, I was really interested in Breq’s story, but didn’t pay as much attention to the bigger political picture. If you’ve read it, you’ll know that galactic politics comes to play a huge role in the book’s second half, so I wasn’t doing myself any favours when I was skimming over those parts. But either way, thinking about the split between the larger political story and the smaller personal one gave me the idea of writing a space opera where there was an empire, a rebellion, political intrigue, and all the rest, but these were things that happened elsewhere whilst my character was on the outskirts, dealing with their own issues. 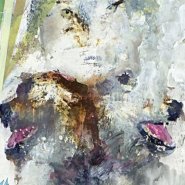 I also knew I wanted it to be short and punchy, so right from the outset I knew it was a novella, not a novel. I took to calling it a “space post-hardcore EP” rather than a space opera, and had the discography of These Arms Are Snakes playing in the background the whole time I was writing it. I can’t remember why I decided the main character would be a psychic space witch, but when it came to thinking about how Mars’ telekinetic abilities worked and the scale of destruction she could cause, I took inspiration from Akira.

More generally, I’ll take inspiration from anything and everything, including song titles, lyrics, books, comics, articles, and graffiti.

It was probably Star Wars that introduced me to science fiction in the first place, and from there I read whatever I could find in the school library — for instance, I remember reading Dr. Who novels, though I don’t remember ever watching the show. The first piece of genre fiction that really dug its claws into me though, was Frank Herbert’s Dune.

This is only my first foray into the publishing industry, so I feel like I’m still figuring things out, but working with the folks at Tor.comPublishing has been fantastic. I got to visit their offices last August with Marlee Jane Ward (award-winning author of Welcome to Orphancorp), and it was surreal being in a room full of people who had read and enjoyed my book, and who were excited about getting it out into the world. That was when I first had the feeling of ‘oh, this is really happening.’

Killing Gravity was picked up out of slush during an open submission window, so I still have lots more to learn about querying, pitching, and all the rest. In a lot of ways, I feel like I lucked into this whole situation, but I still couldn’t imagine a better experience for my debut book. So, if you’ve got a novella but no agent, you could do a lot worse than waiting for a relevant submission window at Tor.com.

I write every day, even if some days ‘writing’ means editing, note-taking, research, or just staring at the wall. On days when I’m actively writing a project, I’ll aim for at least 1,000 words, though if I’m in the zone I can stretch that to 2,000.

Other than that, I think my other main practice is simply remembering that everything is potential grist for the story mill. You’ve always got to be ready to jot down a thought or an idea. Personally I email myself from my phone, ’cause that way I can include links, and I’ll get reminded of the idea later when I open my emails on my computer.

I can remember writing a story in grade one or two about a person trapped in a sort of circus-factory… But no, I tend to find looking back to be cringe-inducing more than anything else.

I kind of always wanted to be an author, but it’s notoriously difficult to make a living as a writer, so I kept on telling myself that I needed to do something else. I spent my university years and much of my twenties half-heartedly writing short stories while (also half-heartedly) trying to figure out how I might be able to have some sort of writing-based career. I never got anywhere though, because what I really wanted to do was write speculative fiction. Around my 30th birthday I decided that I needed to make some big changes, and I finally gave myself permission to try this fiction writing thing properly. I moved interstate, I started working part-time instead of full-time, and used those extra hours to write, approaching it like it was a second part-time job. That was just over three years ago.

It’s such an exciting time to be coming into the field. There have always been women, people of colour, and LGBTIQ+ folks writing science fiction, fantasy and horror, but the current push for better diversity and representation is giving us a wealth of fantastic and varied stories. With Nnedi Okorafor and N.K. Jemisin winning some of the biggest awards in the field, and short fiction publications like the Destroy anthologies, Fiyah Magazine, and so many others that are doing great work, I think SFFH is looking healthier than ever. So yeah, I’m very excited as both a reader and a writer.

As for where my work might fit in — that’s a tough one. I’m proud of Killing Gravity — it’s fun, action-packed, and has some really personal elements in it — but I’ve got no idea how well it might be received. I just hope people find it, enjoy it, and tell all their friends about it; that it finds an audience so I can keep writing books and publishers will want to put them out.

At the moment I’m editing some short stories while I wait for feedback on the Killing Gravity sequel so that I can start editing that. I’ve also got a collaborative dark fiction novel that’s in the planning stage, another novel in the planning stage, and just too many things I want to write. Other than that, I’ve got a collaborative gonzo spy thriller that my co-author and I need to get serious about querying soon.

I just finished Christopher McDougall’s Born to Run, which might end up informing a book that’s percolating in the back of my head (if that does get written, the seed for it will have been S.B. Divya’s Runtime, the same way that Ancillary Justice was the seed for Killing Gravity). Fiction wise, I just started Rosa Montero’s Tears in Rain, but will probably sideline it for an afternoon to read Warren Ellis’s Normal. 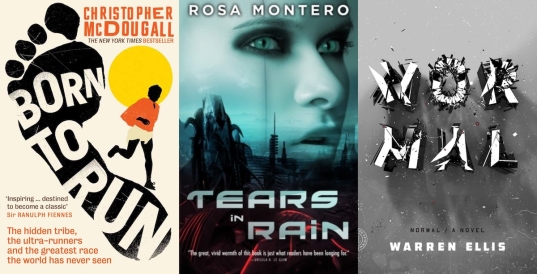 It’s hard to make a blanket recommendation when tastes can vary so wildly, but I’d probably be comfortable suggesting Kurt Vonnegut’s Slaughterhouse-Five. Vonnegut’s narrative style makes for an effortless read, even while he’s dealing with such an important topic. No other author I’ve come across can get that same mix of humour and pathos, of absurdity and humanity.

Well, people are always surprised when they find out I never learned how to ride a bike. I warned you before — I’m boring on paper.

Launching Killing Gravity — hopefully at a bookstore here in Melbourne. And travelling — I’ve got a couple of things on the horizon that if they pan out will require some overseas travel.

Corey J. White‘s Killing Gravity is published by Tor.com in the US and UK, on May 9th, 2017. Here’s the official synopsis:

Mars Xi can kill you with her mind, but she’ll need more than psychic powers to save her…

Before she escaped in a bloody coup, MEPHISTO transformed Mariam Xi into a deadly voidwitch. Their training left her with terrifying capabilities, a fierce sense of independence, a deficit of trust, and an experimental pet named Seven. She’s spent her life on the run, but the boogeymen from her past are catching up with her. An encounter with a bounty hunter has left her hanging helpless in a dying spaceship, dependent on the mercy of strangers.

Penned in on all sides, Mariam chases rumors to find the one who sold her out. To discover the truth and defeat her pursuers, she’ll have to stare into the abyss and find the secrets of her past, her future, and her terrifying potential.