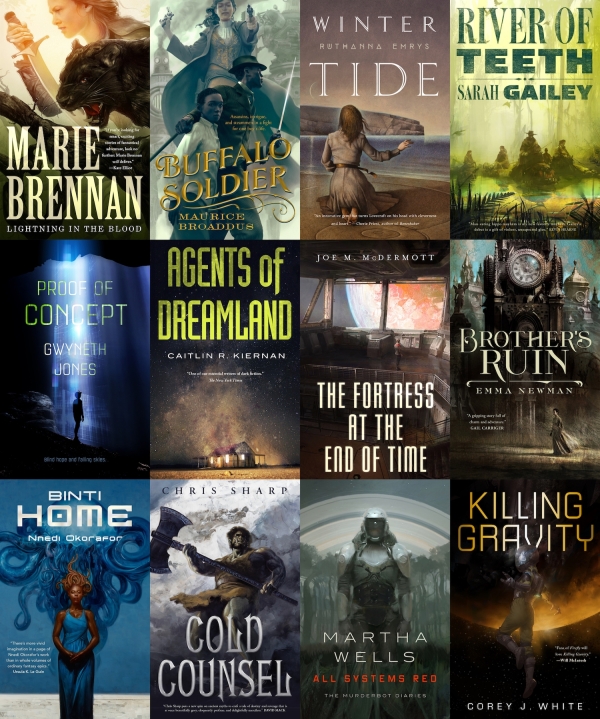 Tor.com has an incredible range of novellas coming out in 2017. So, here are details for just some of those coming up in the first half of the year (I’ll have to do another of these posts in a couple months). All of these sound interesting. I also have many of them already, so I’ll be reading and reviewing them over the next few months.

UPDATE (Jan.12): I’ve added the covers for Gailey’s and Wells’s novellas, which were released after writing.

Marie Brennan, LIGHTNING IN THE BLOOD (May 30)

Once, there was a call — a binding — and so, a woman appeared, present in body but absent in knowledge of her past self.

Making the ultimate journey of rediscovery was not without its own pitfalls — or rewards — and now Ree, a roaming Archeron, spirit of legend and time and physically now bound to her current form, has yet to fully uncover her true identity.

Ree has spent her last innumerable seasons on the move — orbiting, in some sense, the lands of her only friend in this world, Aadet, who has become intricately involved in the new post-revolution politics of his people. Swinging back from the forests surrounding Solaike, Ree falls in with another wandering band, some refugees accompanied by their own Archeron, who seems to know much more about Ree’s own origins than she ever dared to hope.

Also on CR: Interview with Marie Brennan (2013); Guest Post “The Series Payoff”; Reviews of Cold-Forged Flame and A Natural History of Dragons

Having stumbled onto a plot within his homeland of Jamaica, former espionage agent, Desmond Coke, finds himself caught between warring religious and political factions, all vying for control of a mysterious boy named Lij Tafari.

Wanting the boy to have a chance to live a free life, Desmond assumes responsibility for him and they flee. But a dogged enemy agent remains ever on their heels, desperate to obtain the secrets held within Lij for her employer alone.

Assassins, intrigue, and steammen stand between Desmond and Lij as they search for a place to call home in a North America that could have been.

After attacking Devil’s Reef in 1928, the U.S. government rounded up the people of Innsmouth and took them to the desert, far from their ocean, their Deep One ancestors, and their sleeping god Cthulhu. Only Aphra and Caleb Marsh survived the camps, and they emerged without a past or a future.

The government that stole Aphra’s life now needs her help. FBI agent Ron Spector believes that Communist spies have stolen dangerous magical secrets from Miskatonic University, secrets that could turn the Cold War hot in an instant, and hasten the end of the human race.

Aphra must return to the ruins of her home, gather scraps of her stolen history, and assemble a new family to face the darkness of human nature.

This one is a full-length novel, and first in the Innsmouth Legacy series. Published by Tor.com in the US and UK.

Sarah Gailey, RIVER OF TEETH (May 23)

In the early 20th Century, the United States government concocted a plan to import hippopotamuses into the marshlands of Louisiana to be bred and slaughtered as an alternative meat source. This is true.

Other true things about hippos: they are savage, they are fast, and their jaws can snap a man in two.

This was a terrible plan.

No cover available for this one, yet. Published by Tor.com in the US and UK. 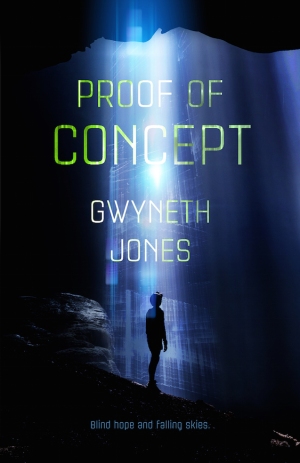 On a desperately overcrowded future Earth, crippled by climate change, the most unlikely hope is better than none. Governments turn to Big Science to provide them with the dreams that will keep the masses compliant. The Needle is one such dream, an installation where the most abstruse theoretical science is being tested: science that might make human travel to a habitable exoplanet distantly feasible.

When the Needle’s director offers her underground compound as a training base, Kir is thrilled to be invited to join the team, even though she knows it’s only because her brain is host to a quantum artificial intelligence called Altair.

But Altair knows something he can’t tell.

Kir, like all humans, is programmed to ignore future dangers. Between the artificial blocks in his mind, and the blocks evolution has built into his host, how is he going to convince her the sky is falling? 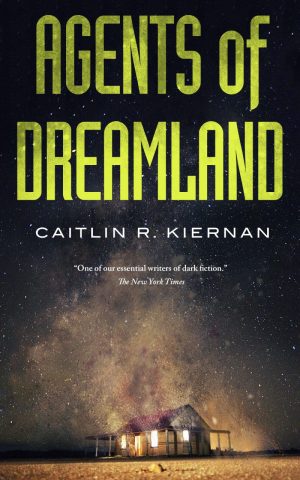 A government special agent known only as the Signalman gets off a train on a stunningly hot morning in Winslow, Arizona. Later that day he meets a woman in a diner to exchange information about an event that happened a week earlier for which neither has an explanation, but which haunts the Signalman.

In a ranch house near the shore of the Salton Sea a cult leader gathers up the weak and susceptible — the Children of the Next Level — and offers them something to believe in and a chance for transcendence. The future is coming and they will help to usher it in.

A day after the events at the ranch house which disturbed the Signalman so deeply that he and his government sought out help from ‘other’ sources, Johns Hopkins Applied Physics Laboratory abruptly loses contact with NASA’s interplanetary probe New Horizons. Something out beyond the orbit of Pluto has made contact.

And a woman floating outside of time looks to the future and the past for answers to what can save humanity.

Also on CR: Guest Post on “Sweet & Dandy: Toots and the Maytals” 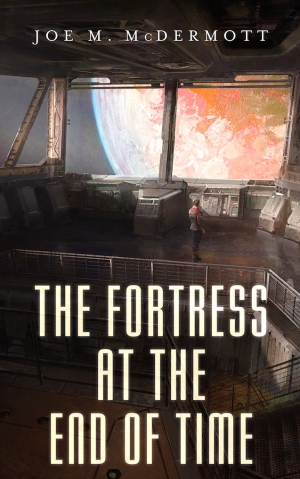 Joe M. McDermott, THE FORTRESS AT THE END OF TIME (Jan.17)

Captain Ronaldo Aldo has committed an unforgivable crime. He will ask for forgiveness all the same: from you, from God, even from himself.

Connected by ansible, humanity has spread across galaxies and fought a war against an enemy that remains a mystery. At the edge of human space sits the Citadel—a relic of the war and a listening station for the enemy’s return. For a young Ensign Aldo, fresh from the academy and newly cloned across the ansible line, it’s a prison from which he may never escape.

Deplorable work conditions and deafening silence from the blackness of space have left morale on the station low and tensions high. Aldo’s only hope of transcending his station, and cloning a piece of his soul somewhere new is both his triumph and his terrible crime.

Another full-length novel. Published by Tor.com in the US and UK.

The year is 1850 and Great Britain is flourishing, thanks to the Royal Society of the Esoteric Arts. When a new mage is discovered, Royal Society elites descend like buzzards to snatch up a new apprentice. Talented mages are bought from their families at a tremendous price, while weak mages are snapped up for a pittance. For a lower middle class family like the Gunns, the loss of a son can be disastrous, so when seemingly magical incidents begin cropping up at home, they fear for their Archie’s life and their own livelihoods.

But Archie Gunn isn’t a talented mage. His sister Charlotte is, and to prevent her brother from being imprisoned for false reporting she combines her powers with his to make him seem a better prospect. However, maintaining the charade will mean masquerading as Archie’s assistant, and delaying or destroying her own plans for marriage.

When she discovers a nefarious plot by the sinister Doctor Ledbetter, Charlotte must use all her cunning and guile to protect her family, her secret and her city. 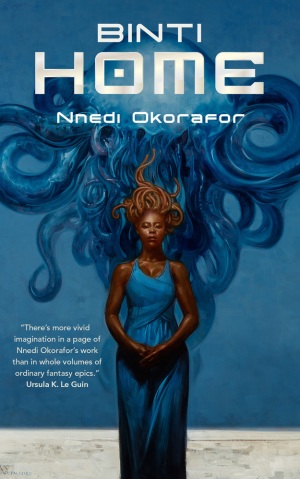 And now she must return home to her people, with her friend Okwu by her side, to face her family and face her elders.

But Okwu will be the first of his race to set foot on Earth in over a hundred years, and the first ever to come in peace.

After generations of conflict can human and Meduse ever learn to truly live in harmony?

The sequel to the critically-acclaimed, award-winning Binti. Published by Tor.com in the US and UK.

Also on CR: Review of Lagoon 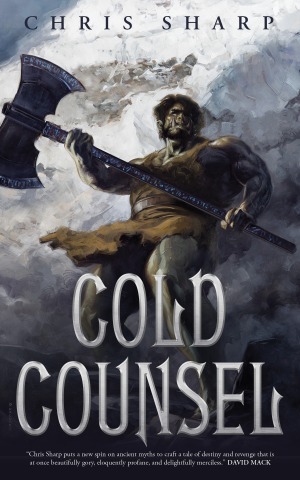 Slud of the Blood Claw Clan, Bringer of Troubles, was born at the heart of the worst storm the mountain had ever seen. Slud’s father, chief of the clan, was changed by his son’s presence. For the first time since the age of the giants, he rallied the remaining trolls under one banner and marched to war taking back the mountain from the goblin clans.

However, the long-lived elves remembered the brutal wars of the last age, and did not welcome the return of these lesser-giants to martial power. Twenty thousand elves marched on the mountain intent on genocide. They eradicated the entire troll species — save two.

Aunt Agnes, an old witch from the Iron Wood, carried Slud away before the elves could find them. Their existence remained hidden for decades, and in that time, Agnes molded Slud to become her instrument of revenge.

For cold is the counsel of women.

This is another full-length novel, and is pretty close to the top of my TBR pile. Published by Tor.com in the US and UK.

Martha Wells, ALL SYSTEMS RED (May 2)

A murderous android discovers itself…

In a corporate-dominated spacefaring future, planetary missions must be approved and supplied by the Company. Exploratory teams are accompanied by Company-supplied security androids, for their own safety.

But in a society where contracts are awarded to the lowest bidder, safety isn’t a primary concern.

On a distant planet, a team of scientists are conducting surface tests, shadowed by their Company-supplied ‘droid — a self-aware SecUnit that has hacked its own governor module, and refers to itself (though never out loud) as “Murderbot.” Scornful of humans, all it really wants is to be left alone long enough to figure out who it is.

But when a neighboring mission goes dark, it’s up to the scientists and their Murderbot to get to the truth.

No cover yet available for this one. The first book in the Murderbot Diaries series (lovely title). Published by Tor.com in the US and UK. 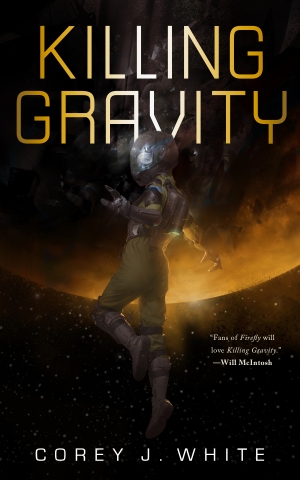 Mars Xi can kill you with her mind, but she’ll need more than psychic powers to save…

Before she escaped in a bloody coup, MEPHISTO transformed Mariam Xi into a deadly voidwitch. Their training left her with terrifying capabilities, a fierce sense of independence, a deficit of trust, and an experimental pet named Seven. She’s spent her life on the run, but the boogeymen from her past are catching up with her. An encounter with a bounty hunter has left her hanging helpless in a dying spaceship, dependent on the mercy of strangers.

Penned in on all sides, Mariam chases rumors to find the one who sold her out. To discover the truth and defeat her pursuers, she’ll have to stare into the abyss and find the secrets of her past, her future, and her terrifying potential.

This is also very near the top of my TBR mountain, so expect a review soonish. Published by Tor.com in the US and UK.