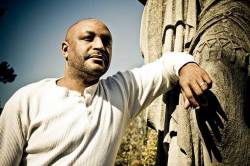 Let’s start with an introduction: Who is Maurice Broaddus?

A husband of one, a father of two, and an author of nearly a hundred short stories and the urban fantasy series, The Knights of Breton Court. I live in Indianapolis where I do a lot of community development work, finding ways to use writing/art to improve neighborhoods and protest. I keep my faith simple (love God, love people, don’t be a dick). And I binge watch a LOT of television.

Your new novella, Buffalo Soldier, will be published by Tor.com in April 2017. It looks really interesting: How would you introduce it to a potential reader? Is it part of a series?

It’s set in the steampunk universe that I created for my story “Pimp My Airship.” In this universe, America lost the Revolutionary War and remains a colony of England. Buffalo Soldier is a stand alone sequel to my novelette, Steppin’ Razor (published in Asimov’s Magazine). Set in a Jamaica which was never a colony of England and thus flourished, an undercover agent, Desmond Coke, gets drawn into a web of political intrigue when he stumbles across a young boy, Lij. As it turns out, Lij is a clone of Haile Selassie, a messiah figure to the Rastafarians, who the government plans to raise as their puppet to control the people. Desmond frees the boy and goes on the run. In Buffalo Soldier, the pair is on the run through the United States of Albion, searching for a place to call home.

I draw inspiration from paying attention to life and the world around me. My mother is from Jamaica. During one of her visits, she began telling me about her trip to a part of the island only open once a year to outsiders. The Maroon people basically have a separate government within the island. The British weren’t able to conquer them, so they had agreed to leave the Maroon alone if they could colonize the rest of the island. I grew fascinated with this idea and started playing with the implications of the Maroon totally keeping the British out of Jamaica. Things developed from there.

“Pimp My Airship” was set in Indianapolis, Steppin’ Razor in Jamaica, but with Buffalo Soldier I wanted to explore what the rest of the United States looked like.

By my Sunday School teacher. I was in class and they were teaching the story about Noah and the Flood. They had one of those flannel graphs on the wall, a kind of felt poster that had the ark on it. The kids were invited to go put felt cut-outs of animals in the ark. When I went up, I put bodies floating on top of the water. “This is the story we just heard, right?” I said innocently. I was excused from class. BUT another teacher connected with me and told me that he thought I was part of his “tribe.” He introduced me to Dr. Who, comic books, and Stephen King.

Writing is what I do. I write because I have to write. A passion of mine, something I’d do free… which as it turns out is a good expectation for the publishing industry.

I try not to over-complicate things: I write for me and I publish to be read. The hard part is getting into the places where my work will be the most visible. And as frustrating and difficult as that can often be, I love every minute of it.

Every story begins with a blank page that somehow I have to fill. That never gets any easier. So I tend to only face down a blank page once I’m armed: pages of brainstormed notes, character sketches, and research. Researching and world-building are my favorite parts of the creative process. So as far as research practices went, Lij is on the autism spectrum. I spent a lot of time on youtube studying speech patterns of autistic children. And it gave me another excuse to hang out and play with my nephew, who is also on the spectrum. Yeah, I do a lot of things which look a lot like me goofing off under the umbrella of “research.”

The writing practice that works for me is late at night planning out what I’m going to write the next day. I set my alarm clock, get up, get dressed, go down to a local coffeeshop and write. I write for 3-4 hours and then do the rest of my day.

My first foray into writing was a story I wrote in 5th grade called “The Big Mac Attacker” where I told the tragic tale of a Big Mac being eaten, from the sandwich’s perspective. I still look back on it fondly.

I realized that I wanted to be an author in college. I was the first person in our family to go to college. My mother told me in no uncertain terms that she has no intentions of paying for an English degree and wanted me to major in something “useful.” Thus my degree in Biology. I gave up writing for the first two years, but by my Junior year, I felt the itch. I used all of my elective classes on creative writing courses. And in an independent study course, was paired with a professor who did his thesis on Stephen King and Clive Barker. That’s when I knew it was meant to be.

The genre always has new challenges to face, its internecine fighting rather echoing the politics of America in general. It, too, struggles with issues of diversity and inclusion and what that should look like.

Which is one of the reasons I never worry about where my work fits in. My parents raised me to not worry about the barriers people put in front of me or pay much attention to folks who told me where I couldn’t go. My job was to be me, in all of my weirdo glory, and make the world pay attention.

I have my first short story collection, The Voices of Martyrs (Rosarium Publishing), coming out in February. And I’m guest editing an issue of Apex Magazine in April. Currently I’m working on three short stories, a play, and an epic/urban fantasy novel. 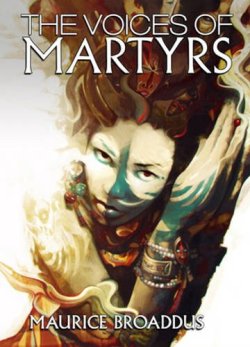 Fiction: Who Fears Death (Nnedi Okorafor), Get in Trouble (Kelly Link), The Name of the Wind (Patrick Rothfuss)

That’s tough. My answer would probably change depending on what day you ask me. So today my answer is either The Gift (Patrick O’Leary) or Futureland (Walter Mosley).

If I had to do it all over again, I’d be a tap dancer.

I think we’re about to enter an era of intense protest art. I look forward to seeing what stories are produced.

Maurice Broaddus‘s Buffalo Soldier is published by Tor.com on April 25th, 2017. (It is also available for pre-order in the UK.) Here’s the official synopsis:

Having stumbled onto a plot within his homeland of Jamaica, former espionage agent, Desmond Coke, finds himself caught between warring religious and political factions, all vying for control of a mysterious boy named Lij Tafari.

Wanting the boy to have a chance to live a free life, Desmond assumes responsibility for him and they flee. But a dogged enemy agent remains ever on their heels, desperate to obtain the secrets held within Lij for her employer alone.

Assassins, intrigue, and steammen stand between Desmond and Lij as they search for a place to call home in a North America that could have been.

2 thoughts on “Interview with MAURICE BROADDUS”