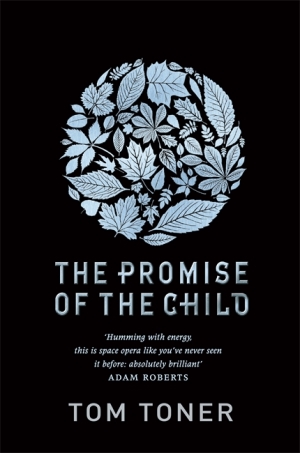 Let’s start with an introduction: Who is Tom Toner?

Hello! Tom Toner is a 29 year-old debut novelist from Somerset with a very patchy beard. Thanks very much for having me.

Your debut novel, The Promise of the Child, is published by Gollancz. It’s already generating quite a bit of attention and praise: How would you introduce it to a potential reader? Is it part of a series?

The Promise of the Child is the first of a six part series called the Amaranthine Spectrum. It’s set in the closing years of the 147th century, over twelve and half thousand years from now, and I suppose you could call it an epic blend of space opera and fantasy. The book has a huge cast of characters, very few of them human in the traditional sense: on the Old World giants live in paper fortresses and singing sea monsters haunt the coasts, while up in the stars of the magisterial Firmament the remains of immortal mankind are slowly going mad. The Promise of the Child has a lived-in, antiquated feel: pure fantasy on one hand and the most ridiculous and frenetic of space operas on the other.

I remember once standing on a beach and wondering what on earth would be in that very spot in ten thousand years. I sat down with nothing but these incredibly vivid images in my head, and set about working out what they were. In terms of inspiration, the novel is essentially what I’d love to read myself; a certain type of adventure that I just couldn’t seem to find more of.

The Terry Pratchett covers by that wonderful artist Josh Kirby that seemed to sum up the book in one insane image. They were so ridiculous that I couldn’t not read them. Then, a few years later, I found some of his SF books and realized the possibilities for a novel, any novel, were endless.

Whenever anyone asks I just go, “Yeah, it’s alright.” People would hate you if they knew how much fun it is.

I write full time (unlike a few of my much more talented friends in the business, who wisely decided not to give up the day job just yet), and so I obviously spend a lot of time just pissing around. The recipe for a good day, I think, begins with strong coffee and an open notebook. Sit in a cafe for a couple of hours and let the new ideas percolate, then head home to type. Work systematically so that you don’t panic at the thought of what you’re trying to do. Read in your lunch break for half an hour: it makes you eat more slowly (all that coffee’s going to give you crazy reflux), then back to the notebook by late afternoon (another good excuse to get out and find another cafe) for corrections to scenes and miscellaneous ideas for the next books. I’ve learnt that avoiding the laptop is no bad thing – take yourself away somewhere with just pen and paper, perhaps for days and days on end, and you get the really interesting stuff. There’ll be time enough to develop everything and make it sound pretty on the keyboard later. I’m a big fan of Colm Toibin, and feel particularly at home using his method of working up a scene over and over again in longhand before typing it out. I always make sure I read New Scientist, too, it gives you some great ideas.

I didn’t realize I wanted to be an author until I got about a quarter of the way through The Promise of the Child, which I’d begun purely for fun. Writing as a job, a real job, just never occurred to me, even though I’d always enjoyed it at school. I did once attempt to write a story only when very drunk, leaving it and picking it up again whenever I got back from the pub. It was hilarious to work on, but that could never last. I don’t really know what I was thinking. 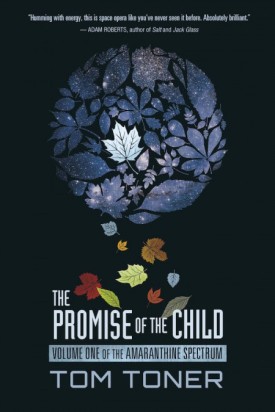 It seems in great shape to me, with such a proliferation of ideas and quality. I’m not quite sure how I’d categorize my books within the genre — The Promise of the Child is just a thick, gloopy mixture of everything I enjoy.

I’m wrapping up the sequel, The Weight of the World, as we speak. It’s been a hell of a lot of fun to write. After Christmas it’s back to work on the third book in the Spectrum. Rattling around at the back of my notes there are some ideas for something totally unrelated to the series, but I can’t see that happening for a long time yet.

I’ve mostly read travel books this year (things like Paul Theroux and Colin Thubron), but I’ve also just finished Bring Up The Bodies by Hilary Mantel, which was one of those novels where you reread whole paragraphs trying to understand how the hell she became so supernaturally talented. I’m still kind of hoping that — ignoring history — Mantel will grant poor Cromwell a reprieve in the next book. He’s one of the most perfectly fleshed out characters I’ve ever read, powerful and magnificent and infinitely likeable. I’m also deep into the great books of fellow 2015 debuts Al Robertson and Marc Turner, the sequel to Jon Wallace’s Barricade [Steeple] and The Edge of the World, by Michael Pye, about the history of the North Sea.

To anyone who’s seen me on a panel this year: my bladder isn’t usually so out of control, I just get nervous and load up on all the free tea & coffee beforehand.

Actually, making it sound like I don’t have a life at all, working on the third book in the series!

The Promise of the Child is out now, published in the UK by Gollancz, and in the US by Night Shade Books. For more on the authors books and writing, be sure to him on Twitter and Goodreads.