Let’s start with an introduction: Who is Gavin G. Smith?

Just some guy… I am a science fiction, fantasy and horror writer. I tend to write quite action-oriented stuff and inject a bit of humour in often gritty stories.

Your novel, Spec Ops Z, will be re-issued by Abaddon next month. It looks really interesting: How would you introduce it to a potential reader? Is it part of a series?

I’m not a great respecter of tight genre boundaries and I think Spec Ops Z straddles a few. It’s set in an alternate 1987 where instead of Glasnost, Russia was taken over by hardliners and launched a first strike against the US using a zombie-inducing “bio weapon”. The protagonists (rather than heroes) are the Spetsnaz (Russian Special Forces) squad tasked with infecting New York. The squad are a crew of somewhat embittered misfits led by led by Vadim Socorlenski a tired and disillusioned officer once hailed as a “Hero of the Soviet Union”. The squad get infected in New York and then it’s all about them trying to get home in the face of WW3 and a zombie outbreak. It’s kind-of apocalyptic post-survival action horror, I guess.

Spec Ops Z is hopefully part of a series, I’ve got pretty solid ideas for two more books (the protagonists are all on borrowed time after all) but it will depend on how well Spec Ops Z does. It does work as a stand-alone story, however.

I think the genesis of the book started with a childhood conversation about a kind of Legion of the Damned in the wake of World War 3. Nuclear war was always on our mind growing up in the ’70s and ’80s. Over the years I’ve consumed a lot of quite ropey post-apocalyptic films, books, role playing games and comics, so I think they’re in the mix as well. Obviously classic zombie films particularly Romero’s Dawn of the Dead, which, along with 28 Days Later, is my favourite zombie film. But also some of the grittier war films. There’s a whole lot of stuff there in the DNA of Spec Ops Z.

In general I think it’s difficult to pinpoint where inspiration comes from. All sorts of places really. I think lots of writers never really switch off and almost anything can become “How can I use this?” or “What can I learn from this?” Other books, fiction and non-fiction, comics, games, film, TV etc. But also conversations, just meeting people, landscape, difficult situations. That said I sometimes wonder how much “inspiration” has to do with it compared to assembling certain building blocks (for want of a better word) setting, plot etc. and then seeing what your characters do when they interact with them. If you know your character well it’s a lot easier. 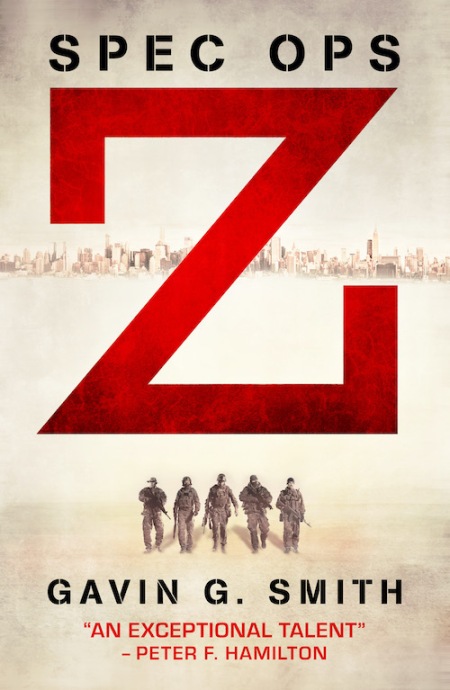 As a kid my gran would come over to babysit for me every Friday night so my parents could go out. We’d watch the Fall Guy but she would always bring a chocolate bar and a DC comic. Where she found DC comics in ’70s Dundee is unclear. I really wish I’d kept hold of them but sadly… That’s the first time I can really remember genre fiction of any kind. I think 2000AD was a distant second.

There’s rough and the smooth, in that respect it’s like any other job, the difference is that we’re lucky enough to be doing something we love. The business part takes you away from the writing but the vast majority of people I’ve interacted with in the publishing industry are both very pleasant and consummate professionals. Where the need for profit meets creativity there is inevitably friction. I love it though and wouldn’t want to do anything else.

Er… I always mean to. So my general idea is to get the story down, do a plan, this will include working out who the characters are and the things that I need to research. I budget a certain amount of time for research (so I don’t just go and live in Researchland) and then go to work once that is done. That said I’ve written every book slightly differently.

I remember writing action-packed Mister Men stories as a child. I don’t know about fondly, I suspect they were the kind of thing that get you sent to a psychologist these days. I’m not sure when I decided I wanted to be a writer but I always enjoyed creative writing at school. Due to several misadventures I found myself on a series of film courses and realised that I very much enjoyed writing scripts and foolishly thought I was good at it. Post-university I tried to break into scriptwriting whilst supporting myself with a succession of shitty jobs but frankly I had no idea what I was doing. Somewhere in this mix I was writing all the TTRPG scenarios/campaigns I used to run for my friends. My first real foray into prose, other than a couple of much-rejected short stories, became my first novel Veteran, which I look back on very fondly!

I think it’s a great time to be working in genre! It’s stronger than ever, there’s something for everyone and we’re starting (still work to be done) to hear all sorts of new voices that have previously struggled to be heard. This is great for the fan/reader (of which I most certainly am), the challenge for the author is being found amongst all these great stories. As such both authors and publishers have to work that bit harder to find the readers who’re going to specifically connect with what we’re writing.

I don’t think there are too many other authors in the UK, outside of big franchises like Black Library, who’s writing my kind of genre fiction, with the emphasis on action. The only one that readily comes to mind is Jamie Sawyer. So I’ve got my space and I’m very happy writing what I’m writing, as I said above, the challenge is finding the people who like this sort of thing and telling them that it’s there.

I currently have a fantasy novel out on submission. I’m just about to finish the first draft on what I think is a crime novel and once I’ve done that I’m going to start work on a contemporary fantasy, action thriller (because y’know those genre walls won’t come tumbling down on their own).

I am currently reading Wizardry and Wild Romance by Michael Moorcock, which is his slightly grumpy take on Epic Fantasy, for my PhD. Pagan Britain by Ronald Hutton, which is an overview of the (mostly) archaeological evidence as regards religion and ritual in the British Isles from the Palaeolithic to the conversion to Christianity. Laurel Canyon by Michael Walker, which is a history of the place of the same name during the ’60s and ’70s and its connection to the LA music scene. I’m dipping in and out of the Planar Adventures sourcebook for the Pathfinder TTRPG, and Tales of Mystery and Imagination by Poe, and I’m rereading William Gibson’s Virtual Light. I don’t usually have this much on the go at the same time, it’s just turned out this way.

I’m tempted to say it would depend on the person but probably The Crow Road by Iain Banks, which is one of my favourite books.

That I have lived for more than 24 hours in an underwater habitat, I’ve been to R’lyeh (and I really have), and that I was once almost blown up whilst dressed as a French Napoleonic-era soldier.

Ha-ha! Sort of a loaded question as we’re all still in lockdown at the moment, so going out would be nice! I’m looking forward to the Covid vaccine being rolled out and seeing people and travelling again. I am hoping that perhaps some of the Cons will run towards the end of the year, because it would be nice to see my genre family again.

Gavin G. Smith’s Spec Ops Z is due to be published by Abaddon Books on February 2nd, in North America and in the UK.