Let’s start with an introduction: Who is Devin Madson?

Devin Madson is an Australian fantasy author who doesn’t usually talk about herself in the third person, but here we are. I started in self-publishing in 2013, and was picked up by Orbit in 2019 in what has been a strange six to seven years of my career. I live in the middle of nowhere surrounded by alternately cute and deadly Australian animals, I’ve abandoned three university degrees, killed dozens of house plants, and rewatch the same handful of movies over and over again.

Your first novel with Orbit Books, We Ride the Storm, is due to be published tomorrow. It looks really interesting: How would you introduce it to a potential reader? Is it part of a series?

It is part of a four-book series, which will be released on a six-month schedule! We Ride the Storm is the story of an empire built by war being brought down by war, crushed beneath its history of division and inherited hurts. We follow a snarky assassin with a voice in her head she can’t escape, an honourable warrior trying to hold on to his tenets while being forced to fight in a foreign war, and an ambitious princess who wants to rule the empire in her own right whatever the cost. There’s lot of intrigue, tense battles, trippy necromancy, respectful head severing and tea. 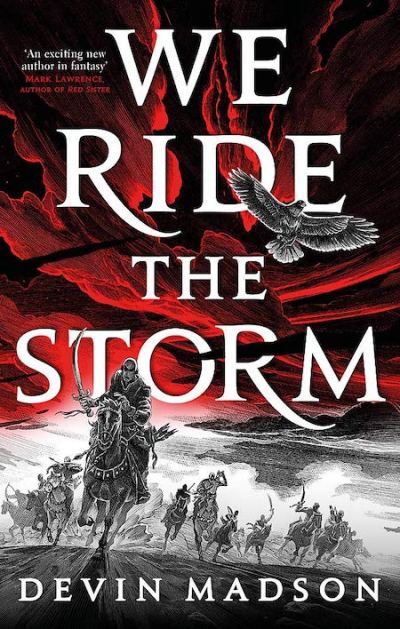 We Ride the Storm is actually the continuation of a generational story that starts back in my novella, In Shadows We Fall, runs through The Vengeance Trilogy (which Orbit is rereleasing in August) and then to We Ride the Storm, so I already had a strong basis on which to build before I came to this story. The world already existed, as did some of the characters and the political situations. (You don’t have to read the other books first, I deliberately wrote them so you can start the story anywhere). I’m a total pantser of first books, so the rest of the inspiration came from all the things I gather and store in my head, I guess, when reading and watching. One of the point-of-view characters was entirely born out of the (original) opening line, “It’s harder to sever a head than people think.” I knew nothing about him before that, and now he’s the main protagonist we see from a nomadic culture who sever heads as a respectful death rite. They weren’t inspired by any particular real-world culture, but there are plenty of nomadic real-world cultures and horse-centric fantasy cultures these things are ultimately inspired by and born from.

It’s always been a part of my life. My parents started me on all their favourite things as soon as I was old enough. Star Wars, Dark Crystal, Star Trek… they were more science fiction fans themselves, but I started reading the Redwall series at a young age and progressed to YA sci-fi, particularly Ken Catran’s books. My first foray into adult fantasy was reading The Belgariad by David Eddings, at which point my lifelong desire to be an author became a desire to be a fantasy author and it’s been an obsessive force ever since (even though I’m no longer a fan of David Eddings).

It is my dream job. I’ve wanted to be an author since I was seven and though I’d been self-publishing for a number of years before Orbit came knocking, having a publisher behind my books is a different thing again. Like every job it has its bad parts and its stressful deadlines and those few people you just don’t like having to deal with. It also has a lot of psychological challenges. It’s insular, you can easily burn out, you’re expected to be available to fans on social media and it can be hard to separate work and real-life time. BUT… there is no job in the world I would rather do, and while the publishing industry is far from perfect when you look beneath the hood, there are so many wonderful, passionate people who work in it, from editors to authors to publicists to booksellers to conrunners, and it’s a daily joy to me to be a part of such a vibrant community.

I do but I tend to develop them for short periods of time as ways to get through specific life situations or projects. For one book, I listened to the same two-hour epic music soundtrack every time I sat down to work and couldn’t write if it wasn’t on, but currently I’m writing in silence. For some books I research as I go, for others I have to make a list of things to check and do them later, or before I start. The only things I do that have followed me over several books now are the changes I’ve slowly made to my physical writing set up – switching to a dvorak layout, learning to write on a kinesis keyboard, using a vertical mouse etc. But every time I think I have found the New Standard Practice that will make me consistently write well and quickly, it never lasts. Sigh.

I announced to my parents when I was seven that I wanted to be an author/illustrator (because all the books I read had pictures so it never occurred to me that I could just write even though my drawing skills were… pitiful). I used to write short stories for every relative at Christmas between the ages of about seven and 11, and absolutely look back on it fondly. My grandparents still have one I wrote about someone sabotaging bikes to win a road race, and my mum kept one called The Little Sad Christmas Tree. It was about a small tree who watches its mother get cut down and cries while all the bigger trees laugh at him. Then they get cut down. Then the little tree gets cut down and taken to a shop to be sold, but no one wants him. So he cries some more. He gets reunited with his mother somehow at the end. Not sure what I was trying to say there, but clearly I’ve been a writer of emotional, heartbreaking stories from quite a young age. 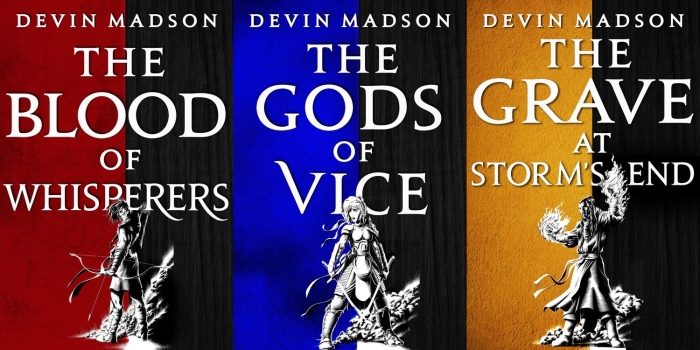 I think we are in the beginning of a real golden age of fantasy, with more and more unique stories and diverse voices writing a broad range of books. There is still space for more and I look forward to the trend continuing and to getting buried in more amazing stories than I will ever be able to read. As for where my work fits, somewhere in the middle bit? It’s got a lot of traditional ideas and tropes (assassin, ambitious princess, nomadic horse people), but also with some less traditional themes and arcs, and the difference of setting all my stories in the same world and constantly building on them in a shared universe way, which isn’t often done.

I’m currently working on the end of the third book of The Reborn Empire series, We Cry for Blood, dabbling with a fun novella, and producing the first season of an audio drama called The 59 Bodies of Saki Laroth set in the same world as my books. I have a… working on too many things at a time problem… 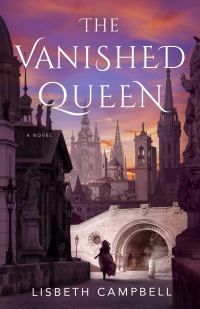 I’m reading The Vanished Queen by Lisbeth Campbell, which is out on the 18th of August, and everyone should totally read it. I was fortunate enough to get an ARC of this and it is the most tense, intimate political fantasy I’ve read for a long time, it’s danger so real and claustrophobic and yet full of hope and determination and moments of well-earned joy. It also has a lot to say about the scars left by cruel people in positions of power and the ways those in their power have to remake themselves to survive.

Ahhhh! That’s such a difficult question! It really depends what sort of books the person likes. For epic fantasy though, it would have to be Black Wolves by Kate Elliott. Deep, intricate world-building and characters, you could read it multiple times and get more and more out of it. It’s one of the few books I’ve had to put down and walk a few laps of the house to calm myself it got so intense and I was so deeply caught in the intrigue. It’s also an excellent book to read for levelling up your own writing craft by studying just HOW she does this.

Given some of the awful things that happen in my books and the detailed descriptions of head severing, it may surprise people to know I am extremely squeamish. I have to have all my injections and blood tests done lying down, and merely hearing medical stories or reading about illnesses can make me faint or give me panic attacks. Woohoo?

I would have had so many exciting things to say here a few months ago. Now the thing I am most looking forward to is having my trad debut out in the world and getting to see it in bookstores (where they are open…). It’s been a lifelong dream and I think I’m going to tear up a lot when I’m holding that book baby in my hands.

2 thoughts on “Interview with DEVIN MADSON”