Let’s start with an introduction: Who is K.A. Doore?

Three gators in a plaid twirly dress. With pockets, of course.

Aside from that – and a ton of moisturizer – I’m a mom, a runner, a reader, a weightlifter, an eLearning designer, a random facts generator, a coffee aficionado, an occasionally comforting voice from the Void, an erstwhile Classicist, a spider wrangler, and – yes, of course – a writer.

I also yell about queer books on Twitter. A lot. God, I love queer books.

The third novel in your Chronicles of Ghadid series, The Unconquered City is due to be published by Tor Books in June. How would you introduce the series to a potential reader? And what can fans of the series expect from the new novel?

The Chronicles of Ghadid are three books of non-stop queer assassins saving the day. It begins with quiet and bookish Amastan trying to solve a hometown murder and ends with an invasion of a country and the end of the world (as we know it).

In between, there are rooftop fights, desert duels, ancient evils, political bickering, necromancers, angry spirits, and an ongoing reevaluation of what family means. Also, you know, undead camels.

The last novel – The Unconquered City – is a culmination of themes, of characters, of plot, and of history. It’s a standalone, but only so much as a potted cactus without its desert can stand alone. It’s about overcoming trauma. It’s also about destroying a powerful and malevolent spirit, dealing with a cantankerous necromancer, and stopping a single-minded warmonger.

Oh, and kissing your crushes along the way. 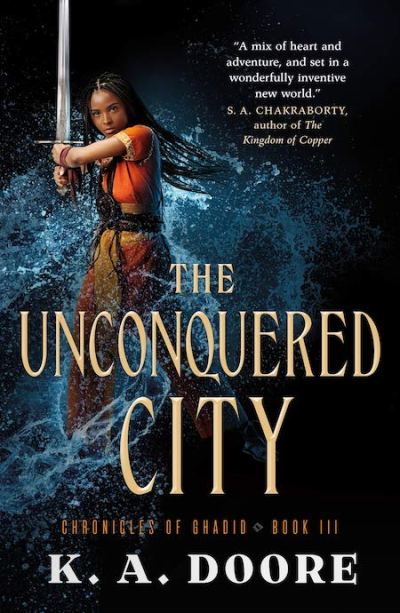 No, really. I had read one too many needlessly heterosexual fantasies (this was 2014, a different time indeed) and quite literally threw the last of these across the room in frustration. Why can’t there just be an adventure where the girl gets the girl for once? I’d thought.

Five years later, and clearly I wasn’t the only one who’d had that thought and done something about it as we’re experiencing a rising tide of queer books.

Beyond that kneejerk reaction, I drew my setting inspiration from the Sonoran Desert, where I was living at the time. While the desert around Ghadid became more Sahara-like as I wrote, I lifted wholesale the dry heat, the pervasive sand, the oddly comforting smell of dust, and the once-a-year rainy season. I tend to write worlds based on where I’m living at the time, because it’s easier to incorporate those specific sensory details.

I also derive an embarrassingly large amount of plot from songs, and that’s all I’m going to say about that.

My father can be blamed for that. Although children’s books are rife with fantasy, my first forays into what one would consider classic genre were the books within reach on the living room bookshelves. Anne McCaffrey was along the bottom, so you could say Pern was my gateway drug. But Bunnicula, the Mouse and the Motorcycle, and The Dollhouse Murders all paved the way for that step beyond. From there it was the Hobbit on the middle shelf and then wandering the genre aisle at our library.

But without those books waiting for me to get curious and grab them at home, I’m not sure how I would have stepped into those complex and wholly engrossing worlds.

I love it. Being an author is everything and nothing like I expected. And my favorite part is one I never dreamed of: being amongst my peers.

I have worked many and various jobs over the years – and will likely work quite a few more – and I’ve always felt a little – or a lot – out of place. I love being around other people who not only voraciously and critically consume genre fiction, but are so passionate that they create it themselves. Being able to talk about your passion and not get stares from your coworkers is the most rewarding and freeing thing.

I’m a #5amWritersClub participant, which means I purposefully get up before the rest of my household to write every day. This has been vital since becoming a parent – often 5am is the only quiet time I will get. Plus, starting the day by accomplishing a writing goal gives me confidence, which is key to coming back the next day and the next to do it all again.

I also use star stickers to incentive myself to hit my daily wordcount goals. Star stickers aren’t just for elementary school!

There was never an “aha!” moment, but a gradual crescendo of understanding that writing would be an indispensable part of my life. I always knew that I’d need a dayjob to support my writing and the struggle was figuring out what that dayjob would be instead of whether I’d become an author.

The closest I ever got to a moment was when I started writing fanfiction in middle school. Not only did I frequently stay up much too late and spent many a school day fervently looking forward to going home and getting back to writing, but fanfic taught me to keep to a schedule, as well as the exhilaration of actually having readers.

It’s been smaller steps of honing and developing my craft ever since, but I do occasionally wish I could go back to those late nights of writing fanfic and absolute disregard for any rules of craft.

I firmly believe we’re in a golden age of SFF. We have so many new and diverse voices at the table and the resulting art has been simply sumptuous. It’s such a fantastic time to be a sff reader and writer and honestly I haven’t read a book I actively disliked in years. Plus, queer characters are finally allowed to be front and center in SFF, in all of their beautiful complexity, and it’s just so soothing to pick up a book and find out that the MC is, incidentally, queer. Alexandra Rowland, Jenn Lyons, Sam Hawke, AK Larkwood, Caitlin Starling, AJ Hackwith, and CL Polk are just a handful of newer adult sff authors bringing queer MCs to life.

As for my work, I see myself among this flood of new, queer authors in adult SFF. YA has been paving the way for broader representation for some time and it’s great to see adult SFF finally catching up. I see my work as part of that catching up – these stories are still fun, they’re still adventures, they’re still escapist, but now they’re queer, too.

I have a short story in Silk & Steel – a queer SFF adventure anthology of high femmes & dashing (swords)women – which will be out this autumn. I’m also working with a handful of authors on a parenting in SFF anthology that will hopefully be announced soon. Between that, I of course have other novels in the works, and when they have homes I’ll be able to talk more about them.

I’m listening to SA Chakraborty’s Kingdom of Copper, the sequel to City of Brass, in anticipation for her third and final book in the series, Empire of Gold, coming out in June. It’s such a lush and vibrantly written fantasy with nonstop action, political intrigue, and miles-deep worldbuilding worthy of being a part of the new sff canon.

I’m reading Sam Hawke’s sequel to City of Lies, Hollow Empire (out this winter from Tor!) and it’s all the twisty politics and machinations of her first book with twice the magic and (faked) debauchery. I’m also reading Dan Stout’s Titan’s Day, sequel to Titanshade, the ongoing noir adventures of a buddy cop duo in a city where disco lives – and so does magic.

Oh gosh, books are so subjective. I’m going to assume this hypothetical person has my tastes in books, and they want something more recent. Therefore I’d recommend A Conspiracy of Truths by Alexandra Rowland. This is a political fantasy rife where a cranky old storyteller turns an entire country upside down from the confines of his cell. It’s a story about stories, but also what lessons people take from stories, and how a story can shape not only an individual but a nation.

Despite my penchant for writing about stabby types and necromancy, I’m actually quite squeamish and have a tendency to faint if there’s any blood, visually or just talked about. Which made biology classes in grade school a real treat, let me tell you.

My first impulse is to answer “seeing other humans again!” Which probably says more about our current timeline than anything else. But not related to the pandemic, I am excited for this third and final book to make it into readers’ hands and to find out if I stuck the landing or not.

While it was important to me that each of these books can be read on its own, it was equally important that, taken together, the whole is greater than the sum of its parts. So I can’t wait to talk about it as that whole.

K.A. Doore’s Chronicles of Ghadid novels are all out now, published by Tor Books in North America and in the UK.

One thought on “Interview with K.A. DOORE”