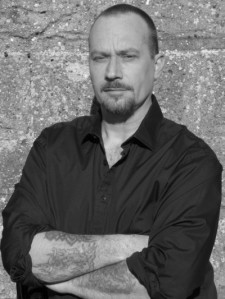 Hi Stefan, thanks for having me back on Civilian Reader!

Last time I was here I was talking with you about my Urban Fantasy books and you asked what might be next, and I said,

“The majority of what I actually read for pleasure is secondary world fantasy, and I’ve always wanted to write a brutal Conan-esque Grimdark swords-and-swearing adventure story so that may see the light of day eventually.”

Well, it sort of did see the light of day.

And yet, at the same time, it sort of didn’t. I did write a brutal secondary world fantasy novel, and that’s Priest of Bones which is out on October 2nd from Ace. But it’s not quite what I had in mind when I originally answered that question three years ago.

Priest of Bones is not anything remotely like Conan, that’s for sure. I don’t remember now exactly what I had in mind, back then in 2015, but it’s certainly not what I ended up writing. Much as I’ve always loved Conan and that kind of 1930s-style sword and sorcery adventure, it’s not really something that I know how to write well without it becoming pastiche. I’m a crime fiction fan at heart; it’s like crime is in my DNA or something. My heroes are almost always crooks to some extent, and that trend continues in Priest of Bones.

Leading man and first-person narrator Tomas Piety is a priest and a soldier in a world roughly analogous to Tudor Britain. He’s also, although he’d phrase it differently, a gangster. He’s not your average fantasy hero, that’s for sure.

Priest of Bones is at its heart a crime novel in a fantasy setting that reads like historical fiction in a world where there’s a little bit of magic. It’s Low Fantasy, rather than Heroic or Epic Fantasy. It is, as Joel Cunningham of Barnes and Noble put it when they hosted the online reveal of Katie Anderson’s magnificent cover design for the book, “Peaky Blinders with swords”.

There are no elves, no dragons, no quests, no dark lord. There’s just a man and his family and his friends, and the worst that the world can throw at them. There’s Bloody Anne, a scarred veteran sergeant who is Tomas’s best friend in the whole world, and there’s the dangerous woman she falls in love with. There’s Tomas’s mad brother Jochan, and his aunt who has been running the “family business” while he’s been away at war, and mad, battle-damaged Billy the Boy who at only twelve years old may just become the most powerful sorcerer in the world.

And then there’s Ailsa. There are the Queen’s Men, the state secret police. This isn’t just a gangster thriller in a fantasy-shaped hat; there’s politics and intrigue and betrayals too, and a much bigger and bloodier game being played out behind the scenes. As Ailsa says to Tomas, “My weapons are gold and lace, and paints and powders. And the dagger, when it’s needed. You can hide a dagger very well indeed, behind enough lace.”

So how accurate was my prediction of my future work, three years ago? Yes, it’s a swords-and-horses fantasy and it’s stabby and it’s sweary and yeah, ok, it’s a gangster story instead of a Conan-alike, but is it Grimdark?

That’s the real question. I’m really not sure anyone outside of the Warhammer community where the term originated even agrees on what that actually means, for one thing. Tomas’s world is grim, there’s no doubt about that, but then war always is. Dark things happen, too, but then they always have done. But is it Grimdark?

I don’t know. Tomas is being manipulated by Ailsa and the Queen’s Men for their own ends but he’s still trying to do the right thing. He’s trying to prevent another war, to protect his streets and his people from starvation and plague, and make their lives a little better in the harsh realities of the oppressive regime under which they live. But he does it using some very questionable methods. Do the ends justify the means?

That’s a question I seem to keep coming back to, in every book I write. Do you even need to be justified, so long as you get the right outcome in the end? It’s an interesting question, that’s for sure. Even so, does that make a book Grimdark? That to me implies utter hopelessness and despair, and this book isn’t that.

My friend Ed McDonald who wrote the utterly marvellous Blackwing and Ravencry has an expression that he likes to use, that he maybe even invented, and that’s Grimheart. As Ed himself explains it, “Grimheart appears like Grimdark at first glance, but is actually about the value of love and friendship”, and I really like that. Perhaps that’s what Priest of Bones is. Yes, Tomas does some harsh things. He does them for what he sees as good reasons though, and with good intent. He does it for the love of his streets and his people, and it’s the strength of Bloody Anne’s friendship that helps him get through what needs to be done.

Tomas is certainly a very different man to my previous protagonist, Don Drake from the Burned Man books. Drake is basically a coward and a charlatan, whereas Tomas is a man of iron will and the strength of his convictions. Pushed into a corner he will never, ever back down, whatever the cost, and he really does think he’s doing the right thing.

So I guess what I actually ended up writing was a brutal not-at-all-Conan-esque swords-and-swearing gangster story in a subgenre I had no idea even existed when I was writing it.

This is a very strange way for a grown man to make a living, but by Our Lady I love it and I wouldn’t change it for anything.

2 thoughts on “Guest Post: “Grimdark or Grimheart?” by Peter McLean”