Let’s start with an introduction: Who is Peter McLean?

I’m a married man and grandfather in my 40s, who has been writing for over twenty years, and actually taking it seriously for perhaps the last five years or so. Over the years I’ve also been a kung fu teacher, a Wiccan priest, a Unix technician and a chaos magician, and I am now an IT account manager at a multinational outsourcing corporation.

Your debut novel, Drake, will be published by Angry Robot. It looks pretty cool: How would you introduce it to a potential reader? Is it part of a series?

Thank you! I guess I’d describe it as “a Guy Ritchie movie with demons in it” – Drake is set in the ganglands of South London, but instead of a cheap gangster my central character is a cheap magician, a hitman who uses his magical abilities and the power of an enslaved Archdemon to summon demons and set them on people. Of course it all goes horribly wrong for him in fairly short order, and that’s when things start to get interesting.

Drake is a stand-alone novel in its own right but is also the beginning of the Burned Man series of urban fantasy crime thrillers.

What inspired you to write the novel and series? And where do you draw your inspiration from in general

Drake had a very organic birth – it all started with a thread over on the Absolute Write forums where we were challenging each other to write a great opening line to a story we hadn’t written yet. I came up with what is still the opening line of Drake, and it had such a great response I knew I had to follow it up with a short story. That short story was published in an anthology put together by SFFWorld.com in 2013, but I wasn’t satisfied with it. There was so much more story to tell about Don Drake that the short story turned into a novel, and that novel turned into Drake.

As to where I draw my inspiration, I think it’s a combination of many influences. I’ve studied magic for a long time for one thing, so much of the occultism in Drake is drawn from real sources albeit exaggerated for dramatic effect. The setting itself has come from a lifelong love of that side of life, from growing up on The Sweeny and Callan on telly when I was a lad through to Lock Stock and all its imitators in the 90s. My dad is a South London boy so maybe it’s just in the blood, I don’t know. That and I used to mix with some fairly iffy people back in my chequered past.

I think genre has always been a part of my life, in one form or another. My mother was an Oxford scholar of English literature, but she was also a devotee of Tolkien and C.S. Lewis, and I remember her reading Narnia and The Hobbit to me before I even started school. I grew up on Joan Aiken and Dianna Wynne Jones and Alan Garner, and progressed to Tanith Lee and Stephen King via James Herbert and Dennis Wheatley. I was one of those kids who had an adult library card at the age of 12, which I remember my parents had to sign off on. They had occult books in the adult section of the library in those days, too, and I read the lot of them.

Well obviously I’m still new to this, but I have to say so far I’m absolutely loving it.

I’ve been “a writer”, as in “someone who writes”, since I was in highschool, but being a published writer is a whole new ball game. I’m very fortunate in that my publisher Angry Robot have been hugely supportive of both me and Drake, and a joy to work with in general.

Work ethic is the most important thing. Like most authors I have a full time day job, and being an author effectively means I’m running a small business as well so in reality I have two full time jobs. And that’s fine, and it’s perfectly possible, if you do the work.

I work for an American multinational so my day job can be UK hours with evening calls to the USA, or early morning calls with India or Australia, or both. Throw in being the on-call Duty Senior Manager 24 hours a day for one week in four and it only leaves a certain amount of time free. That time is spent writing, revising, editing, researching, doing interviews, whatever needs to be done at the time. If that means I don’t watch TV or go to the pub or whatever then so be it. If I’m on deadline and I have to work till 4am to get it done then I work till 4am, it’s as simple as that.

I’ve wanted to do this since I was in my teens. English was always my best subject in school, and creative writing always the part of that I was best at. I had a wonderful English teacher named Alison Clayton when I was 15, and she was the one who first encouraged me to write for pleasure outside of class assignments. She has a fond mention in the acknowledgements of Drake and I’d dearly like to get in touch with her so I can sent her a copy and say thank you.

My first forays into writing were pitiful things as I suspect everyone’s probably were, and thankfully no copies still exist! The first thing I can remember writing for my own enjoyment was a very thinly disguised Han Solo fanfic when I was maybe 13 or something, and that was about as good as it sounds.

Still everyone starts somewhere and if you want to learn to write you have to write and write and write, and never mind how bad it is. Every hundred thousand words or so it gets better, and you just keep building on that and getting better until it isn’t terrible anymore.

Wow, well “the genre” is such a huge and diverse thing these days it’s hard to have an opinion of it as a whole. There are things I love and things that aren’t to my taste, but SF/F is a big enough playground that I’d hope there’s room for everyone now. As to where my work fits in, I guess it’s somewhere in a bracket of urban fantasy that’s darker than the Dresden Files but not as literary as Tanith Lee, an every(wo)man’s noir fantasy thriller.

At the moment I’m focused on the Burned Man series but there are always other things bubbling away at the back of the stove, so to speak. The majority of what I actually read for pleasure is secondary world fantasy, believe it or not, and I’ve always wanted to write a brutal Conan-esque grimdark swords-and-swearing adventure story so that may see the light of day eventually.

For pleasure I’ve just started reading Europe at Midnight by Dave Hutchinson, the sequel to his magnificent Europe in Autumn. If you haven’t read Hutchinson, picture a Len Deighton spy thriller crossed with William Gibson and a prophetic sense of the almost inevitable collapse that seems to be heading towards the European Union at the moment. Tremendous stuff.

Non-fiction wise it’s all research material – at the moment I’m reading Franz Bardon’s The Practice of Magical Evocation for the umpteenth time, a copy of The Goetia annotated by Aleister Crowley, and an internet forum I won’t name here which is a public support group for recovering addicts. 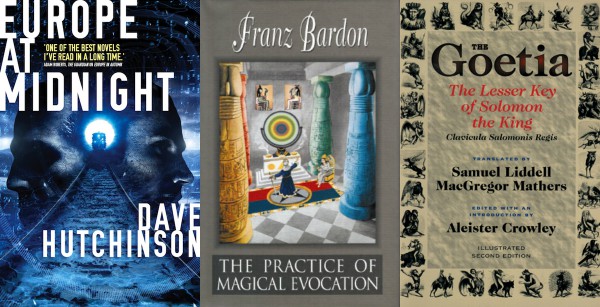 That’s a tough one – I don’t tend to be shy about things in general so there probably aren’t many surprises left. I was initiated as a Wiccan Priest, High Priest and Witch at the age of 17, how’s that?

Well, of course Drake comes out on 5th January in the US and 7th January in the UK, so those dates are burned onto my consciousness at the moment! After that I’ll be at EasterCon in Manchester next March and hopefully at FantasyCon later in the year as well, so I’m looking forward to that. Other than that, it’s all about the continuing Burned Man series.

As Peter just mentioned, Drake is published in early January 2016, be Angry Robot Books. In case you need some more incentive to check it out, here’s the synopsis:

Hitman Don Drake owes a gambling debt to a demon. Forced to carry out one more assassination to clear his debt, Don unwittingly kills an innocent child and brings the Furies of Greek myth down upon himself.

Rescued by an almost-fallen angel called Trixie, Don and his magical accomplice the Burned Man, an imprisoned archdemon, are forced to deal with Lucifer himself whilst battling a powerful evil magician.

Now Don must foil Lucifer’s plan to complete Trixie’s fall and save her soul whilst preventing the Burned Man from breaking free from captivity and wreaking havoc on the entire world.

Peter McLean was born near London in 1972, the son of a bank manager and an English teacher. He went to school in the shadow of Norwich Cathedral where he spent most of his time making up stories. By the time he left school this was probably the thing he was best at, alongside the Taoist kung fu he had begun studying since the age of 13. He grew up in the Norwich alternative scene, alternating dingy nightclubs with studying martial arts and practical magic.He has since grown up a bit, if not a lot, and now works in corporate datacentre outsourcing for a major American multinational company. He is married to Diane and is still making up stories.

5 thoughts on “Interview with PETER McLEAN”