Let’s start with an introduction: Who is Kristen Ciccarelli?

Kristen Ciccarelli is a shy Canadian who lives in the far North. You can often find her baking bread, wandering the shores of the North Atlantic, or hiking with her dog in the headlands near her house. She loves to write and read and daydream (usually in front of her wood stove).

Your latest novel, The Caged Queen, is due out this month via Gollancz. It looks really interesting: How would you introduce it to a potential reader? Is it part of a series?

The Caged Queen is both a sequel and a companion novel in that it follows sequentially after the first book (The Last Namsara) but it also stands alone, meaning you can read the series out of order if you want to. The protagonist of The Last Namsara is a dragon-slayer named Asha, while the protagonist of The Caged Queen is a young outlander queen named Roa, and both girls show up in each other’s books.

In The Last Namsara, Roa married a boy-king she has very tumultuous history with in order to protect her people (because only as queen could she truly help her people get out from under the thumb of his). When The Caged Queen opens, however, Dax begins breaking every single promise he made her, putting her people into further danger. So Roa takes matters into her own hands…

I love stories that have the following elements: powerful girls as protagonists, court intrigue, interesting mythology, magical creatures, and romance. Both The Last Namsara and The Caged Queen have these things. But while the first book was about the journey of someone who’d lost herself (and then begins reclaiming herself), The Caged Queen is about someone who is losing someone else (someone she loves very much) and the lengths she’ll go to save them.

The inspiration question is always a really hard one to answer, because I really have no idea. I take inspiration from everything, I suppose. From a random fact I come across while reading a book of non-fiction; from the way the earth smells when I step outside my door; to the dream I had last night or the song I heard on the radio yesterday as well as the seemingly unanswerable questions about life that I ask every day, all the time. Basically, I find inspiration from living.

I honestly don’t remember a time that I wasn’t drawn to science fiction and fantasy. I remember a book my mum used to read me called Morgan & Yew (featuring two best friends: a unicorn and a yew). It was my favourite and once I could read for myself and choose my own books, I chose more books like that one. Books with unicorns and dragons, with magic and sorceresses. I think I’ve just always been drawn to the strange and impossible, really.

I love it. Sometimes I still have to pinch myself when I realize that I get to do this for a living. I love seeing my books — which once existed solely in my own head — on shelves and in other languages all across the world. I love meeting my international publishers and translators. I love interacting with readers. I get to be connected to all of these strangers I’ve never met, scattered all around the globe, because of something I wrote. That’s amazing.

My first foray into writing (that I can remember) was a very short tragedy about a unicorn, complete with illustrations, which I wrote it around the age of seven. (Actually, now that I think of it, it was essentially Morgan & Yew fan fiction.) I spent almost my entire adolescence writing stories, but then stopped when I went away to university because I was under the delusion that writing was foolish and childish and it was time to grow up.

I didn’t realize I could be an author as a kid — it wasn’t on the list of occupations they gave us in school. Writing was just what I did because I loved it. It was only years later, after I dropped out of school because it made me miserable, that I started writing again while supporting myself with bakery and bookstore jobs. Around this time, I stumbled across Kristin Cashore’s blog. Reading it made me realize authors were real people and since I was a real person, and since I loved to write, maybe I could be an author too.

When I was a teen, the YA fantasy section took half of one tiny shelf at the bookstore and if you wanted more books, you went to the adult SFF section. That’s no longer the case today. The YA fantasy genre has really expanded/exploded. I’m still amazed whenever I walk into a bookstore and see the walls and walls full of YA books.

The genre is also diversifying. When I was growing up, I never saw protagonists of colour on covers (or inside them). But now with bestselling authors like Tomi Adeyemi, Sabaa Tahir, Renee Ahdieh, Dhonielle Clayton, etc, that’s changing in a big way and I hope it will continue to change.

As for my place in it, it’s not really something I think about. I write the stories I want to write, the ones I’m craving but can’t find on the shelves. If readers keep reading my stories and enjoying them, that’s all I really aim for.

Right now I’m working on book three in the Iskari series, which is also a sequel/stand-alone. It will be due into copyedits later this fall, and after that, I’m free to fully devote myself to another project I’ve been playing with this year. It’s also a fantasy series, set in a very different world than the Iskari series, but featuring many of the things I loved writing so much in this one: magic, monsters, myths, forbidden romance, and (of course) adventure.

Right now I’m reading my friend Heather T. Smith’s novel The Agony of Bun O’Keefe. I’m possibly biased, but Heather is the kind of author whose books are unexpectedly profound and always move me in deep ways.

Patricia A. McKillip’s The Forgotten Beasts of Eld! 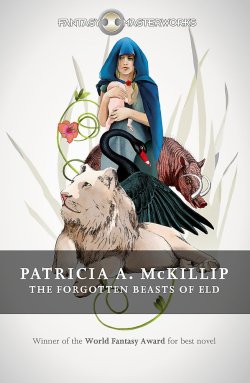 Maybe that I used to play hockey three times a week when I was in high school?

Kristen Ciccarelli‘s The Caged Queen is out now, published by Gollancz in the UK, and Harper Collins in Canada and the US.