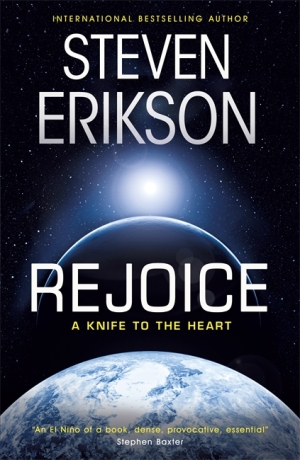 Steven Erikson is one of SFF’s modern luminaries — he is, after all, the author of the beloved Malazan series (which began in the late-1990s). I’m slightly ashamed to admit that I’ve read nothing of his… This oversight looks like it’ll be remedied this year, however. His next novel is Rejoice, which sounds really interesting:

A story of mankind’s first contact and a warning about our future.

An alien AI has been sent to the solar system as representative of three advanced species. Its mission is to save the Earth’s ecosystem — and the biggest threat to that is humanity. But we are also part of the system, so the AI must make a choice. Should it save mankind or wipe it out? Are we worth it?

The AI is all-powerful, and might as well be a god. So it sets up some conditions. Violence is now impossible. Large-scale destruction of natural resources is impossible. Food and water will be provided for those who really, truly need them. You can’t even bully someone on the internet any more. The old way of doing things is gone. But a certain thin-skinned US president, among others, is still wedded to late-stage capitalism. Can we adapt? Can we prove ourselves worthy? And are we prepared to give up free will for a world without violence?

And above it all, on a hidden spaceship, one woman watches. A science fiction writer, she was abducted from the middle of the street in broad daylight. She is the only person the AI will talk to. And she must make a decision.

Rejoice is due to be published by Gollancz on October 18th, 2018.