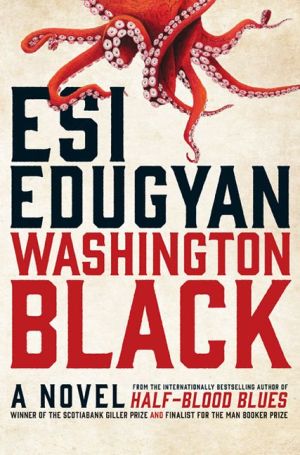 A gripping, beautifully written story about freedom, science, and finding one’s place in a hostile world

When two English brothers arrive at a Barbados sugar plantation, they bring with them a darkness beyond what the slaves have already known. Washington Black – an eleven year-old field slave – is horrified to find himself chosen to live in the quarters of one of these men. But the man is not as Washington expects him to be. His new master is the eccentric Christopher Wilde – naturalist, explorer, inventor and abolitionist – whose obsession to perfect a winged flying machine disturbs all who know him. Washington is initiated into a world of wonder: a world where the night sea is set alight with fields of jellyfish, where a simple cloth canopy can propel a man across the sky, where even a boy born in chains may embrace a life of dignity and meaning – and where two people, separated by an impossible divide, can begin to see each other as human.

But when a man is killed one fateful night, Washington is left to the mercy of his new masters. Christopher Wilde must choose between family ties and young Washington’s life. What follows is a flight along the eastern coast of America, as the men attempt to elude the bounty that has been placed on Washington’s head. Their journey opens them up to the extraordinary: to a dark encounter with a necropsicist, a scholar of the flesh; to a voyage aboard a vessel captained by a hunter of a different kind; to a glimpse through an unexpected portal into the Underground Railroad. This is a novel of fraught bonds and betrayal. What brings Wilde and Washington together ultimately tears them apart, leaving Washington to seek his true self in a world that denies his very existence.

From the blistering cane fields of Barbados to the icy plains of the Canadian Arctic, from the mud-drowned streets of London to the eerie deserts of Morocco, Washington Black teems with all the strangeness of life. This inventive, electrifying novel asks, What is Freedom? And can a life salvaged from the ashes ever be made whole?

I first learned of Esi Edugyan’s latest novel when the Man Booker Long-list was announced. I was surprised that a novel that wasn’t even out yet would be on the long-list, but it led me to try to hunt down a copy. Harper Collins Canada was very kind in supplying me with an ARC, and I started reading it the weekend before it was published. I really enjoyed reading this novel.

Usually when I start reading a new novel before bed, I get about 5-10% into it (because I now read mostly on my Kindle, I can be so specific…). With Washington Black, however, I stayed up way past my bedtime, and read the first 135 pages. I was immediately taken with Edugyan’s prose, which is among the best I’ve read in a very long while, and the author’s ability to evoke atmosphere. Her characters, too, jumped off the page: George Washington Black is a sympathetic, engaging narrator, and a fantastic guide to this time and the places to which he travels. 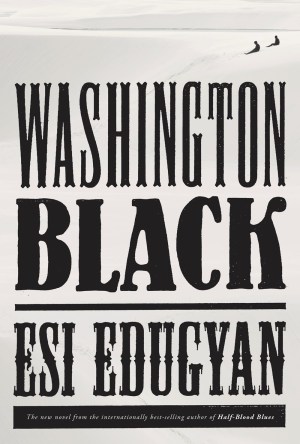 I very much enjoyed reading the book, and blitzed through it. I never struggled to pick it up after I was forced away by real life to deal with work or some other task. I loved Black’s voice, and I was easily absorbed by his interactions with the various characters who enter or pass through his life.

Christopher “Titch” Wilde, one of his second masters, and also his saviour and betrayer, is an interesting character who remains on Black’s mind throughout the novel. After being co-opted by Titch as his manservant during his time at the Faith plantation, Wash is introduced to the natural sciences, and we see his interest, mind and talents grow considerably as he helps Titch with his various endeavours. After a fateful evening at Faith, though, they are forced to flee and so begins a globe-trotting adventure that is by turns thrilling and painful. I leave the synopsis, above, to provide details about that — any more would spoil things for a new reader.

Edugyan’s writing throughout is excellent. Each character, whether central or peripheral is brilliantly realized on the page: they are all three-dimensional, realistic and interesting. Wash is, as I’ve already mentioned, a great protagonist, and through his eyes we learn of the pain and suffering of his life on the plantation, as well as the tragic ways it distorts his notion of kindness and family. While there are horrifying acts of brutality at the plantation, it is in the smaller moments that Edugyan shows readers that really punch one in the gut — the things that the eleven year old Wash is excited by, “treats” that are nevertheless tragic and heartbreaking to read about. In Wash’s relationship with Titch, too, we see just how warped Wash’s impression of the world has become through his lifelong enslavement. We learn that Titch, whose family has benefited enormously from slavery, is something of an abolitionist

At one point early in the novel, Titch shows Wash a report in which he has been compiling all of the cruelties he has witnessed at the plantation, and this leads to this heartbreaking exchange:

“I shall ask my brother to release you permanently,” said he, weighing my expression. “Does that please you?”

I made no answer, so shocked was I.

“You would rather remain the property of my brother?”

“Oh no, Titch, I would rather be your property,” said I, eagerly. I did not understand the pained look that crossed his face.

But he seemed troubled, somehow, and in my innocence I could make no sense of it. I had thought I was saying what he wished to hear.

While there are some improbable events in the novel, Edugyan does a fantastic job of never allowing Wash, nor the reader, to forget the realities of the times of which she writes. Wash is forever an outsider to the societies in which he finds himself — whether the small communities in the arctic he briefly visits, or the peculiar, rough-and-tumble community in Nova Scotia he inhabits for a while. There are no attempts made to hide away the awful realities. Washington Black is a broken protagonist, one we root for from the very beginning, but he cannot help but be shaped by his environment and his treatment at the hands of white people. Physical as well as psychological cruelty is a fact of life for him. It leaves many marks. The story neither revels nor indulges in these cruelties, but attempts to show how harsh life was back then, how they add to Black’s complexity and worldview, and also how they inform those whose lives intersect with his.

Through the aforementioned improbable (but not ridiculous) events, Black is set on an adventure that sees him travel to some far-flung corners of the then-known world. Each location is wonderfully described and brought to life on the page. From the frigid arctic (a real shock to Wash’s system), to the naturally bountiful (also very cold) coast of Nova Scotia, to the busy and full streets of London, readers can easily picture Wash’s journey. A scene that really stood out for me, amongst so many vivid moments, was when Wash discovers an octopus on a dive — it’s short, but really showcases Edugyan’s gift for description and characterization as he marvels at the playful creature.

“You are like an interruption in a novel, Wash. The agent that sets things off course,” he is told at one point — an excellent way to describe the protagonist’s impact on the lives around him: especially for Titch and the Goffs, who have the most impact on his life. His travels are filled with wonder, and his love and passion for natural sciences and especially marine biology, are infectious and brilliantly evoked on the page.

The first two-thirds of the novel are truly superb, packed with great details and observations. The final third, however, seemed to lose steam just a bit. However, Wash doesn’t tire in one of his quests (no spoilers!), and we are given a bittersweet confrontation and a couple more revelations that knock Wash psychologically, momentarily off course. I wonder if perhaps the novel should have been longer, which might have allowed it to avoid the apparent loss of steam towards the end?

A beautifully-written story about one young man’s journey from plantation slave to accomplished natural scientist; who struggles to define what it means to be free, and to find his place in the world. I really enjoyed this, and highly recommend it to all.

Washington Black is out now in Canada (Harper Collins) and in the UK (Serpent’s Tail), and is due out in the US on September 18th (Knopf).