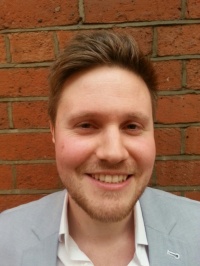 Let’s start with an introduction: Who is Tom Toner?

Hello again! Thanks for having me. Tom Toner is the author of the Amaranthine Spectrum, an epic space opera/science fantasy series set 12,500 years in the future.

Your next novel, The Tropic of Eternity, will be published in July. It’s the third novel in your Amaranthine Spectrum series. How would you introduce the series to a potential reader, and what can fans of the first books expect from this instalment?

Time to remember the old elevator pitch… The Amaranthine Spectrum — beginning with 2015’s The Promise of the Child — sets its tale in the 147th century Mediterranean, following the misadventures of Lycaste, a shy, giant species of evolved human and his journey into the Amaranthine Firmament, the 23 surrounding stars controlled by the last remnants of immortal humanity. In between we get to see all sorts of odd beasties and MacGuffins, from singing sea monsters to paper fortresses and tin spaceships.

The latest instalment visits the most distant Prism worlds (and even the fringes of Andromeda) as much of the story reaches a — hopefully — dramatic conclusion, answering as many of the readers’ questions as possible.

My first novel started out as an attempt to really explore what our planet could be like many thousands of years in the future. I’d just seen a haunting, eerie documentary about the burial of nuclear waste in Scandinavia, and how best to keep it from falling into the hands of future generations hundreds of thousands of years from now.

Inspiration comes from absolutely anywhere — it sounds a bit pompous but wandering around art galleries and museums always seems to work for me, and you can’t go wrong reading New Scientist and watching nature documentaries. I’ve said this before in an interview somewhere, but drinking two cups of very strong coffee and standing in the shower can give you some bloody weird ideas, too.

Terry Pratchett and Iain M. Banks — a friend gave me Look To Windward for my 15th birthday (he thought I was reading too much Stephen King) and it blew my mind. I didn’t really know what was going on, having missed the first few Culture novels, but it didn’t matter.

I’ve got a lot more boring as I’ve grown older, so sitting on my own all day writing works pretty well. That said, I’m at that junction between books right now and need to go back to real work, which fills me with dread.

I won a short story competition at school, turning in something about three times as long as it should have been, and knew that I just really enjoyed writing. It was about Mallory and Irvine climbing Everest in 1924, and I just flat out made up all the historical stuff — no research at all. Loved every minute of it.

It seems pretty big and healthy and noisy, as far as I can tell. My books, if I’m honest, aren’t very widely known — I have a small and precious group of readers who mean a lot to me, and I take nothing for granted in this business.

I have about eleven projects on the go: embryos of future novels or short stories, ideas I can’t let go of (as well as the detailed outlines for books 4-6 of the Amaranthine Spectrum). Some of them are just bubbling away on the USB, doing nothing much. Three or four are much more fully realised, and at present I’m working on two novels concurrently — a beast of a space opera totally unconnected to my Amaranthine series, and a horror/thriller that’s been a lot of fun to write.

The Master by Colm Toibin is one of the greatest books I’ve ever read, and you don’t have to know much about Henry James to appreciate it.

No idea! I try not to overshare on social media — I honestly find it just a bit too nerve-wracking and bad for the old mental health — but I absolutely love chatting to my readers at conventions.

I LOVE weddings, and have five coming up this summer. I’ll hopefully be going back to Ithaka — the Greek island where chunks of my books are set — later this year, too.

Tom Toner’s Amaranthine Spectrum series is published by Gollancz in the UK and Night Shade in North America. The third novel, The Tropic of Eternity is published tomorrow.