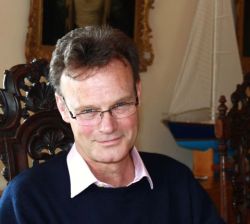 Let’s start with an introduction: Who is James Heneage?

I am a fifty-nine year-old writer who’s spent his life involved in the worlds of books and history. In 1987, I set up Ottakar’s, which I built into a 150-bookshop chain before selling it to Waterstones in 2006. I’ve been a Booker Prize judge and Chaired the Costa Book Awards. I was Chair of the Cheltenham Literature Festival before founding my own festival devoted entirely to history: ‘The Chalke Valley History Festival’, which now attracts some 40,000 visitors a year. I’ve been a writer since 2010 and have written four works of fiction, all set in the 15th Century at the end of the Byzantine Empire, much of which are set in the Peloponnese. So I’ve built a house there where I now live for half of the year.

How would you introduce your new book By Blood Divided to a new reader?

It is a love story set against the fall of Constantinople and the end of the 2,000-year Roman Empire, one of the most cataclysmic events ever to have happened. The story involves a love triangle: two men who are arch enemies, (the commander of the Emperor’s Varangian Guard and the Sultan’s greatest general), and a courtesan from Venice. The story winds between the last outpost of Byzantium in the Peloponnese, the great trading empire of Venice, the emerging power of Portugal and Constantinople where it reaches its climax in the greatest siege in history.

What inspired you to write the novel and where do you draw your inspiration from in general?

What inspired me was sailing into the beautiful Byzantine city of Monemvasia in the Peloponnese at sunset, about ten years ago. I fell in love with it, then its twin city of Mystras, about fifty miles away. The more I learnt about the last fifty years of the Byzantine Empire, and its extraordinary flowering in these twin cities in Greece, the more I wanted to write a series of novels set at that time.

In general I draw inspiration from writing at my home in the Peloponnese. It is such an ancient land, the cradle of our European civilization, where every inch breathes its extraordinary history. Travelling around that beautiful country, you can’t help but be inspired.

How were you introduced to historical fiction?

I was introduced to the drama of history by my father, whose knowledge was encyclopaedic. I first entered the world of historical fiction through the legend of King Arthur. I read T.H. White’s Once and Future King when I was ten and was swept into the glorious world of the past. I’ve never really left it.

Well, it’s hardly work, it’s the best form of escape. Researching a period, getting lost in it, bringing it to life on the page…this is the stuff of a dream life. So I love it.

The publishing industry I’m very used to, having been on the opposite side of the fence as a bookseller for twenty years. It’s changed dramatically since I started Ottakar’s. There’s less money and time to build brands and readerships, and every book has to work much harder. The bookselling landscape had changed too with so much more online. But I find the change as fascinating as it is challenging.

None that are original, I suspect. I write in the morning and read in the afternoon. I come up with new plot developments on long walks. I think there’s no alternative to traveling to the places I’m writing about, preferably writing in them to. Hence building the house in Greece.

When did you first realize you wanted to be an author, and what was your first foray into writing? Do you look back on it fondly?

It was when I was very young. I wrote prodigiously and badly as a child: fiction, plays, poetry. In my twenties I wrote a thriller based on the Iranian Revolution. It wasn’t published. I re-read it the other day and can see why.

What is your opinion of the historical fiction genre today and where do you fit into it?

There are some terrific writers and it’s good that some are being recognized with prizes, such as Hilary Mantel and Amitav Ghosh. Historical fiction covers an enormous span from the military-based (Simon Scarrow and Ben Kane), to Sarah Dunnant’s wonderful renaissance stories and Kate Mosse’s intriguing cliff-hangers. I’m sad that the giants of the past, in particular Dorothy Dunnett, don’t sell as they did. I fear she’s too intricate for the modern taste.

I’m not sure I know exactly where I fit in. I hope to appeal to people who enjoy a love story as much as a good battle, to people who like their historical context accurate. But I love the fantasy in history too — the Game of Thrones element. The period I write about has events and characters that are larger than life, bordering on the fantasy. It’s one reason I love it, (as did J.R.R.Tolkein who chose it as the model for his Lord of the Rings).

Do you have any other projects in the pipeline and what are you working on at present?

I am starting on a new series that is set in the Greek War of Independence (1821-32), which was a fascinating time of Great Power manoevering and drama played out in the Peloponnese. Otherwise, I continue to be involved in the History Festival. My next project will be to organize history tours in the Peloponnese which operate from our house there. I hope to start these next year.

What are you reading at the moment?

I’m re-reading Eleni by Nicholas Cage, the wonderful story of a man’s quest to find the men who murdered his mother in 1948, during the Greek Civil War. It’s brilliant.

If I could recommend one novel?

It would be Niccolo Rising by Dorothy Dunnett. Read that and you’ll read the other six in the Niccolo series which is set in late 15th century Europe and has a fabulous caste of characters.

What is something readers might be surprised to learn about me?

Perhaps my obsession with Tintin. I named my chain of bookshops after King Ottokar’s Sceptre and my son is called Harry Tintin Heneage. I find Tintin’s world a very calming, reassuring one relative to the scary one we live in today.

What am I most looking forward to in the next 12 months?

Apart from the publication of By Blood Divided, it is probably my 60th birthday (and our 30th wedding anniversary) which we’ll celebrate in true Greek style in the Peloponnese.

James Heneage‘s By Blood Divided is published on June 1st, by Quercus. Quercus has also published Heneage’s Mistra Chronicles (which are on sale at the time of writing). 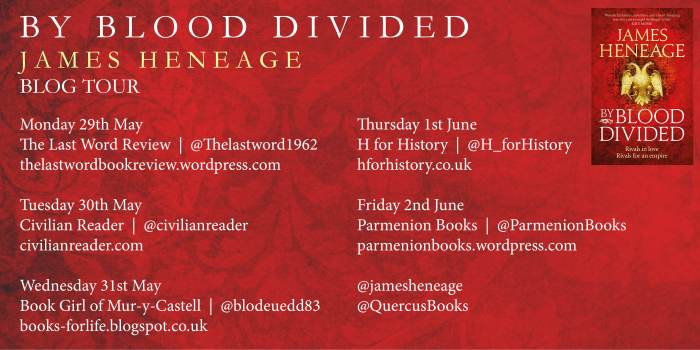 One thought on “Interview with JAMES HENEAGE”