Let’s start with an introduction: Who is RJ Barker?

Oh gosh, that’s a big question isn’t it? Who am I? People have written whole books on that, well, not on me personally, on that question in general, but I suppose if I did write a book about it that might be a little bit of overkill. I’ll stick with the general perception of people who know me and say RJ (no dots, for dots are the enemy of mankind[1]) is friendly and a bit eccentric. And has big hair.

Your debut novel, Age of Assassins, will be published by Orbit in August. It looks rather interesting: How would you introduce it to a potential reader? Is it part of a series?

It is part of a series but it’s written so each book stands alone. You’ll get more out of it if you read all three (Age of Assassins, Blood of Assassins and King of Assassins) but you don’t need to do that to get a complete story. The tagline of book one probably says it best: “To catch an assassin, use an assassin.” Our hero, Girton Club-Foot, is an assassin put into a position where he has to become a detective and stop a killer to save his, and his master’s, skin. It’s exciting and full of action but at heart it’s a murder mystery. It also revolves around the central relationship between Girton and his master who are very much characters (I hope) you will really like. Girton especially is someone driven to do the right thing. And there’s magic, and they ride around on beasts with massive antlers which, to be honest, I would read a book for that alone. I do like antlers.

I wrote a science fiction book that didn’t quite sell[2] but came close and as part of that I spoke to an editor called Mathilda Imlah who was at Head of Zeus and we got on to talking about a mutual love of Agatha Christie and mystery stories. I think that sparked something. Then I’d started another SF novel and was about 10,000 words in when I had the idea for Age of Assassins[3] which literally came at me in one piece. I dropped what I was doing and wrote the first version in about six weeks. The other two haven’t been quite as quickly written but have been remarkably easy to do. It almost feels like cheating. I hope that means they are good, not slapdash.

I’ve always been surrounded by books of all sorts of different types. I read Tolkien at a very young age, I think before I was ten[4]. And I was always surrounded by poetry as well, and a lot of the poetry my mum and dad liked was actually quite fantastical, talking animals, strange beasties[5] and I think it instilled a delight in me in oddness. I like oddness, and to be taken out of myself to somewhere else in the company of people I like.

It’s amazing. I’ve always written stuff. Just me, sat here in my front room typing away because I enjoy doing it and then suddenly you’re being paid for it. I still can’t quite believe that. And I’ve never been part of what I suppose you’d call ‘genre culture,’ going to conventions and the message boards and stuff like that. So it’s all been new and exciting, going to conventions and meeting people has been great; I love people so any excuse to meet more is a good thing. All the people I’ve met in publishing have been great too, editors, authors, publicists. It’s like finding out your job is to mess about with your friends doing stuff you enjoy. Which is good, as I have dedicated my life to messing about with my friends doing stuff I enjoy, but it’s always left me pretty skint before. Now I’m being paid for it.

I sit and I write, that’s it. I quite like to be distracted actually, I’ll usually have Twitter on while I write and mess about on that. It might seem like I am spending my day making stupid jokes but it’s an important part of my process.[6]

The first thing I ever wrote was something about Vampires when I was about fifteen and I sent it to Interzone(I think) and got a very kind letter back with the subtext, ‘maybe try again when you’re a big boy.’ Sadly, for all humanity, this work of genius is lost. Then I discovered music and I played in bands for a very long time, though never particularly successfully. I decided to go back to writing, then had a bit of a break to be chronically ill[7] and once that was under control started writing like I meant it. And here we are. Still a bit surprised by the whole thing, if I’m honest.

I’m not sure I really have much of an opinion and I’ve not really thought about how my work would fit in anywhere. I had an idea I really liked and I wrote it, I’m not a very considered person[8], I play my life entirely by whim.

Genre itself is pretty healthy though, you’re no longer the weird kid for taking comics to school and it pretty much rules the TV and film ratings in a lot of ways. But genre, in the end, is just a way of telling stories about people. Fashions and interests will change and evolve but our interest in people[9] is pretty constant. That’s what interests me really, the people. And the explosions. And the stabbing.

I’ve just finished V0.0 of book 3 and am editing Book 2. I have a vague idea of what I would like to do next (Nathan Powerface and the Exploding Stabby People) but I don’t tend to think ahead if I’m honest. My current project is playing with Bertie, our new kitten and making my little boy a Luke Skywalker costume for when we go to Nine Worlds which is he SO excited about.

I started reading the Spenser P.I. series by Robert B Parker on the recommendation of  someone and I cannot stop. They are like book crack and I think there’s about a million of them. I’m also looking forward to reading Rotherweird which my agent, Ed, sent to me. And I’ve just got a book about pigs and pork cookery called Hog, which looks fantastic. I’m reading KLF: Chaos, Magic and the Band who Burned a Million Pounds. And I have a book about Lobsters which I may re-read, lobsters are fascinating. But not as fascinating as octopuses which I am planning on getting a book about. 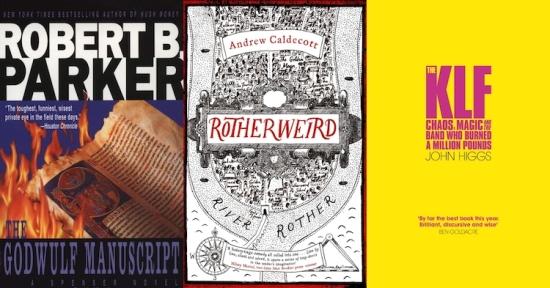 ONE? This is positively barbaric. I kind of want to say something from Iain M. Banks’s Culture series as I think they are full of hope and humanity — and wonderful for it. but just one would be cruel as you’d want the rest. So in that case Watership Down by Richard Adams. I’ve been reading this book as long as I can remember and it just keeps unfolding, keeps adding beauty and hope and has the overall philosophy of do right and it will work out. And I believe that, I think it’s important to at least strive for that.

I am a fully qualified airline pilot.[10]

Meeting people. Laughing a lot. I’ve always done those things but my opportunities have expanded somewhat.

RJ Barker‘s Age of Assassins is published by Orbit Books at the beginning of August, in the US and UK.

8 thoughts on “Interview with RJ BARKER”