Let’s start with an introduction: Who is Brian Evenson?

I’m a writer who grew you in the American West, mostly in Utah, but who has lived all over the place in the US as well as in France, Switzerland, and briefly in Mexico. My writing often has one foot in what people think of as literature and one foot happily in genre. I was raised Mormon, but was pressured out of that religion (and out of my first teaching job at a Mormon university, BYU) because of the nature of my first book, Altman’s Tongue, and am very happily non-religious now.

Tor.com will be publishing your new novella, The Warren, later this year. It looks rather interesting: How would you introduce it to a potential reader? Is it part of a series?

It’s a book told from the perspective of a solitary person within a ruined structure who has had other personalities loaded into his head as a way of preserving them as the mechanical systems of the structure begin to expire. The man character is trying to figure out who he is, whether he and his kind are likely to die out, and whether he is in fact human after all. I think the audience starts to figure things out along with him, sharing his journey and maybe understanding some things that he just can’t.

It’s potentially a part of a series of novellas. I have ideas for two others, but haven’t written them yet.

What inspired the novella? And where do you draw your inspiration from in general?

It was inspired partly by Gene Wolfe’s novella The Fifth Head of Cerberus. I think that’s such a deft little novella — all three parts of it, but the first part especially — and is really satisfying to read. I think I began there, with an admiration for that book, and then let it take me somewhere slightly different. Lurking in the background are aspects of the world and character characteristics of my novel Immobility, though it’s set in a somewhat different place. 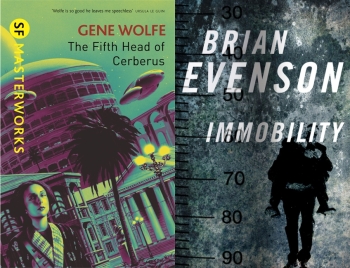 I’ve read genre fiction ever since I was a kid. I started with people like Asimov, Bradbury, McCaffery and others, but when I was twelve or thirteen I checked out of the library on a whim one of Michael Moorcock’s Elric books. That was life-changing for me, and blew open my sense of what genre could do. That led me to New Wave SF writers like J.G. Ballard and Aldiss, and from there to Gene Wolfe and M. John Harrison.

I like it a lot, because it lets me write and allows me to do something I love, and even get paid for it. I’ve always thought there was a difference between people who want to write and people who are in love with the idea of being a writer. If you’re obsessed with a romantic notion of being a writer, then writing is going to seem like hard work, and you’re not likely to last. But if you like the act of building worlds with language that is writing, if that feels satisfying and necessary to you, it’s a very different story.

It depends on the project I’m working on. These shift and change a little, and I like to use that change to shake me up and open me to new things. So, for a lot of years I only wrote with a pencil with a #3 lead and felt like that was necessary, but one day decided to write with a pen instead. I’ve gone from writing in bound notebooks to writing on lined paper to writing on scratch paper to writing on the computer and back again, and there’s a moment for each. I used to write every day from 12 to 2 in the morning, but that’s shifted too. In terms of research, just whatever a particular project demands…

The first story I wrote that I have a record of I wrote when very young. It began something like, “I am a rock. I live in the center of the earth.” The second story I remember writing was an adaptation of the Stormalong folk tale which I did in fourth grade, and which was kind of a continuing adventures of Stormalong. My teacher had us write a story and then type it out and then bind it as a book. It made a real impression on me.

After that, when I was maybe thirteen or fourteen my mother published a Mormon SF story (a very specialized subgenre) and had aspirations to write more such stories. To give herself time to write, she’d set up me and my four siblings doing art projects of various kinds so we couldn’t distract her from writing. Since I was the oldest, she encouraged me to write. I wrote a piece that was kind of a riff on Kafka’s story “The Coming of the Messiah”, and loved doing it. After that, I was hooked.

I think some of the most exciting work being done today is being done in SF, Fantasy and Horror, and that there are amazingly smart, aware things being written. I’m someone who reads widely and do see myself as being involved in an active conversation about the possibilities of SF and trying to expand and explore the edges of the genre.

I’ve got a novel I’m trying to sink my teeth into. But so far haven’t gotten very far with it. We moved to California just a few months ago and I immediately started teaching at CalArts a few days after the move so half my life is still in boxes. I’m hoping once more of my life is out of boxes I’ll be able to do more with the novel.

I just finished China Miéville’s This Census-Taker, which I liked a great deal. It’s one of those books that seems deceptively simple but really has a ton going on with it. Also in the middle of a book by Damien Ober called Doctor Benjamin Franklin’s Dream America. It’s nuts: I’m not quite sure how to describe it. It takes early American history and rewrites it by inserting the internet, internet plagues, and aliens. It’s not quite like anything I’ve ever read before. I also just reread Thomas Ligotti’s Songs of a Dead Dreamer and Grimscribe, both of which I still like very much. In terms of non-fiction, I’m about six books in to the Object Lessons series, which has books that focus on a particular notion or concept. I read one about Dust, another about Waste, and one about Cigarette Lighters…

Maybe that I was a two-time state freestyle wrestling champion when I was in high school.

The Warren is due to be published by Tor.com on September 20th, 2016. Here’s the synopsis:

X doesn’t have a name. He thought he had one — or many — but that might be the result of the failing memories of the personalities imprinted within him. Or maybe he really is called X.

He’s also not as human as he believes himself to be.

But when he discovers the existence of another — above ground, outside the protection of the Warren — X must learn what it means to be human, or face the destruction of their two species.

For more on his writing and novels, be sure to check out his website, and follow him on Goodreads.

4 thoughts on “Interview with BRIAN EVENSON”