Let’s start with an introduction: Who is Emmi Itäranta?

I’m a Finnish writer living in the UK. I have written two novels to date: Memory of Water and The City of Woven Streets, which is out in the UK on 2 June 2016. I write in two languages, English and Finnish.

Voyager has just published your new novel, The City of Woven Streets. It looks fantastic: How would you introduce it to a potential reader? Is it part of a series?

Thank you! The City of Woven Streets is a story set on an isolated island where dreaming is forbidden. The main character, Eliana, is a young woman who works as a weaver; she is also a dreamer, and she must hide this ability, because in her society it’s a taboo. Her life changes when she finds a woman with her tongue cut off and Eliana’s name tattooed on her skin. It’s a stand-alone novel.

I’m interested in situations where something we take for granted is taken away from us. Dreaming is so central to human experience that when I came up with the idea of a society where dreaming was forbidden, I wanted to know more about how such a place would work – and there was no other way to find out but write.

Probably through bedtime stories as a child. I was reading genre fiction long before I had a name for it: detective novels, fantasy books by Diana Wynne Jones, A Wrinkle In Time by Madeleine L’Engle, science fiction for children and young adults. For me, it was simply about a good story.

Personally, I love being a writer, but it means you have to learn to live with uncertainty. Writing is a solitary job, and there is never any guarantee of how your next book will be received. It is a constant learning curve, but that is precisely what makes it so interesting. There is always something new to discover.

I’m a planner. I like to draw an outline for the story early on in the writing process. I tend to do some basic research before I start, but most of my research takes place in parallel to the writing. I find that this is the best way to feed the imagination and get over any blocks that might appear along the way.

I don’t recall a time when I did not want to work in storytelling in some shape or form. My mother claims that when I was about five, I asked her if it was possible to be a writer and a ballet dancer at the same time. I recently discovered a short story from my teenage years in which a woman loses an arm in a car accident and then grows it back. It was mostly dreadful, and I have never shown it to anyone, but I do have a fondness for it, because it contained some almost-but-not-quite-entirely-dreadful glimpses among the crud.

I have mixed feelings about genre. I think it can be a great tool for a writer, but I believe it should be seen as just that: a tool for experimenting with narrative conventions, rather than a limitation that will fence the writer in. I would almost prefer not to put genre labels on my books – not because I think there’s anything wrong with them, but because I worry they come with baggage of expectations and will therefore limit the readers’ interpretation of the book too much.

That said, I’m very aware of genre conventions while writing, and I understand why the labels are important to publishers and booksellers. Furthermore, I think that speculative genres like science fiction and fantasy are in a very exciting place today. They are constantly evolving, and there is a growing awareness of diversity, which can only be a good thing.

I’ve had to take a short break from writing due to a strain injury (caused by too much writing!), but I’m in the early stages of planning my next novel. It will be set in the future, and it deals with memories that shape us, secrets we keep, and the wider consequences of the choices we make. That is all I can say about it at this point. 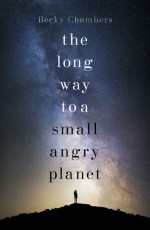 I have just started reading the multi-award nominated A Long Way to a Small Angry Planet by Becky Chambers, and I’m absolutely loving it. It is like embarking on a journey through space with characters you can’t wait to learn more about.

I love to grow my own potatoes. It’s not something I often get asked about.

A trip to Japan. Reading all the novels I haven’t had time to read in the past two years. At some point, immersing myself in the world of a new book, and hopefully learning something more about writing in the process.

The City of Woven Streets and Memory of Water are published in the UK by Voyager. For more on the author’s writing and novels, be sure to check out her website, and follow her on Twitter and Goodreads.

One thought on “Interview with EMMI ITÄRANTA”