Where his skin was marked with short black lines, hers was covered in stars. A whole sky’s worth, or so he thought. August had never seen more than a handful of real stars on nights when the grid went down. But he’d heard about places where the city lights didn’t reach, where there were so many stars you could see by them, even on a moonless night.

“You’re dreaming,” said Ilsa in her singsong way. She rested her chin on top of his shoulder, and squinted. “What is that in your eyes?”

“That speck. Right there. Is it fear?”

He found her gaze in the mirror. “Maybe,” he admitted. He hadn’t set foot in a school, not since the day of his catalyst, and nerves rang like bells behind his ribs. But there was something else, too, a strange excitement at the idea of playing normal, and every time he tried to untangle how he felt, he just ended up in knots.

“They’re setting you free,” said Ilsa. She spun him around and leaned in until her face was barely an inch from his. Mint. She always smelled like mint. “Be happy, little brother.” But then the joy fell out of her voice, and her blue eyes darkened, sliding from noon blue to twilight without a blink between. “And be careful.”

August managed a ghost of a smile for her. “I’m always careful, Ilsa.”

But she didn’t seem to hear. She was shaking her head now, a slow, side-to-side motion that didn’t stop when it should. Ilsa got tangled up so easily, sometimes for a few moments, sometimes a few days.

“It’s okay,” he said gently, trying to draw her back.

“The city is such a big place,” she said, her voice tight as strings. “It’s full of holes. Don’t fall in.” 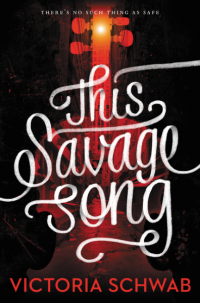 Ilsa hadn’t left the Flynn compound in six years. Not since the day of the truce. August didn’t know the details, not all of them, but he knew his sister stayed inside, no matter what.

Her fingers tightened on his arms. And then her eyes lightened and she was there again. “Of course you will,” she said, all sunshine.

She kissed the top of his head, and he ducked out of her arms and went to his bed, where his violin case sat open, the beautiful instrument waiting inside. August wanted to play — the desire a hollow weight in his chest, like hunger — but he only let himself run his fingers over the wood before snapping the case shut.

V.E. Schwab‘s highly-anticipated This Savage Song is published by Titan Books in the UK, on June 7th. Here’s the synopsis:

Kate Harker and August Flynn never should have met. They live in opposite ends of Verity, a grisly metropolis where evil acts breed literal monsters. Violence creates clawing Corsai; murder summons bloodsucking Malchai; and the most terrible atrocities create the mysterious soul-stealing Sunai. One side of the city, ruled by Kate’s father, Callum Harker, has struck a devil’s bargain with the monsters. The other, led by August’s father, fights them. The thin truce that keeps the Harker and Flynn families at peace is crumbling, and August is sent to spy on Kate. But when Harker’s own men try to assassinate Kate and pin it on the Flynns, August finds himself at a crossroads: let his family be framed for her murder, or save the life of his father’s enemy.

August and Kate quickly find themselves running from both sides as they try to stay alive long enough to uncover who wanted her dead, in a city where no-one is safe and monsters are real…

The novel is also published in North America, by Greenwillow Books, on July 5th. For more on Schwab’s writing and novels, be sure to check out the author’s website, and follow her on Twitter, Tumblr and Goodreads.

2 thoughts on “Excerpt: THIS SAVAGE SONG – “LONELY” by V.E. Schwab”