Skip to content
HomeUpcoming: A CLOSED AND COMMON ORBIT by Becky Chambers (Hodder) 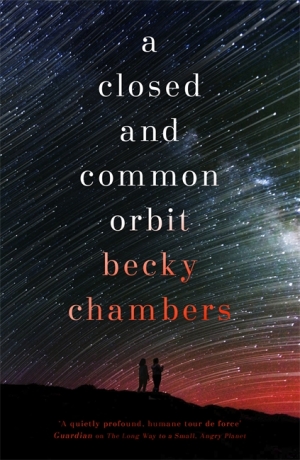 A Closed and Common Orbit is the stand-alone sequel to The Long Way to a Small, Angry Planet (which I have, but still need to read — hopefully soon). The series has been very well received by reviewers, and is often described as a perfect read for fans of Firefly, Joss Whedon’s various projects, and Star Wars. I think both novels sound great. Here’s the synopsis:

Lovelace was once merely a ship’s artificial intelligence. When she wakes up in an new body, following a total system shut-down and reboot, she has no memory of what came before. As Lovelace learns to negotiate the universe and discover who she is, she makes friends with Pepper, an excitable engineer, who’s determined to help her learn and grow.

Together, Pepper and Lovey will discover that no matter how vast space is, two people can fill it together.

The Long Way to a Small, Angry Planet introduced readers to the incredible world of Rosemary Harper, a young woman with a restless soul and secrets to keep. When she joined the crew of the Wayfarer, an intergalactic ship, she got more than she bargained for — and learned to live with, and love, her rag-tag collection of crewmates.