I’m a British writer who qualified as a librarian and then spent twenty years as a full-time folk singer touring the world with vocal trio Artisan. Since the band retired from the road I’ve become a booking agent, fixing music tours for other performers. I work from home and split my time between my music business and my writing. I’ve sold short stories to anthologies and magazines on both sides of the Atlantic. My first two novels for DAW, Empire of Dust and Crossways, both science fiction, came out in 2014 and 2015 respectively and Winterwood, my first historical fantasy, comes out in February 2016.

Your new novel, Winterwood, will be published by DAW. It looks pretty interesting: How would you introduce it to a potential reader? Is it part of a series?

It’s the first part of the Rowankind Trilogy, but it’s also a stand-alone story (so it doesn’t end on a cliffhanger). Ross Tremayne, a cross-dressing female privateer captain and unregistered witch, likes her life on the high seas surrounded by a bunch of barely reformed pirates and accompanied by the ghost of her dead husband, but when she pays a deathbed visit to her estranged mother she inherits a brother she didn’t know she had, and a task she doesn’t want. Enter Corwen, wolf shapechanger. He’s handsome, competent and Ross really doesn’t like him. Neither does Will’s ghost. Ross has to choose between the land and the sea; the ghost of the past, or the possibilities of the future, and she has to make a decision which could affect the whole country, for better or for worse. 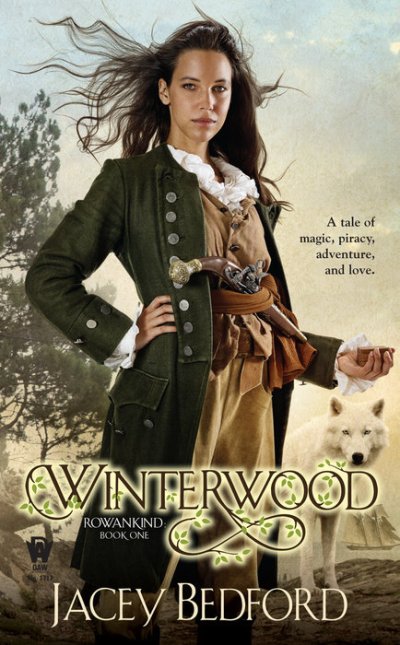 What inspired you to write the story? And where do you draw your inspiration from in general?

I’m usually inspired by a single scene or idea and then I have to write it to find out what happens next. In the case of Winterwood, I had this idea of a death-bed confrontation between a young woman and her estranged mother. Gradually, as I wrote the scene, some of the salient facts revealed themselves. I didn’t know Ross was a widow until her mother asked if her husband, Will, was with her now and she replied that he was always with her, and then internally thought, Sometimes as little more than a whisper on the wind. That was when Will’s ghost became a character in his own right. Don’t ask me where the inspiration came from for that. I haven’t a clue. It just came and I grabbed it and wrestled it on to the page before it could escape.

When I was a girl all I used to read were pony stories, but one day I found — in the local library — a pony book with a difference. It was The Horse and His Boy, by C.S. Lewis one of the Narnia books (and still my favourite). It was my gateway into fantasy fiction. Not long after, at school, I joined one of those book clubs where you buy a paperback book every couple of months. My first purchase was John Wyndham’s Day of the Triffids. That started me reading science fiction and as a teen I read my way through every SF book my local library carried. Probably most of them were much too old for me, but I didn’t care. I loved them.

I love it. Though I’m on the wrong side of the Atlantic to get close to the heart of it. My publisher is DAW in the USA and I live in Yorkshire, England. Mostly I have to be satisfied with phone calls and emails, but I was lucky in that the World Fantasy Convention was held in the UK in 2013 and then Worldcon was held in London in 2014, so I had two opportunities to meet up with my Editor, Sheila Gilbert, in person and discuss edits on my books and also get to know Sheila and Betsy (Wollheim) personally as well as meeting some of the other DAWthors. DAW is a brilliant publisher to work with.

I work late at night when the phone has stopped ringing and the household goes quiet. It’s often three or four in the morning before I give in and go to bed. So you can probably guess that I’m not really a morning person unless I have to be. Luckily I work from home in my music business, so I can set my own hours.

I knew I wanted to write when I was still a little girl, I just never thought I’d have the opportunity to do it professionally. When I was fifteen I started my first novel, a dystopia about young people being persecuted if they hadn’t got a job (which may, on reflection, have been a bit ahead of its time if you look at the current attitude to unemployed youngsters in the UK.) The novel featured characters who were thinly disguised versions of my favourite pop stars. Luckily the world was saved from my teenage scribblings, because I only got as far as Chapter Six.

That’s a big question and to be honest I’m not sure I’m qualified to answer it because there’s so much out there that only professional reviewers and those people lucky enough to have oodles of time to devote to reading get an overall picture. I often compare awards lists with my own reading list and think I’m on a different planet. All I can say is that there’s an amazing number of great books, and that’s very heartening. As to where my work fits into it, I don’t really know because I write both science fiction and fantasy. At the moment (with Winterwood) it’s historical fantasy, but I have other books and ideas which would fit other categories, too. I’m lucky that DAW has already given me the opportunity to write in two completely different genres.

Right now I’m writing the first draft of Silverwolf, which is the sequel to Winterwood. Then I have a contract to write Nimbus, which is the third in my Psi-Tech space opera series, following on from Empire of Dust and Crossways. I also have a other finished books on my hard drive which are waiting for the right opportunity.

I find it difficult to read fiction when I’m writing a first draft because what I’m reading can so easily bleed over into what I’m writing, so as a result I don’t get through as many books as I’d like to. I recently read and loved Judith Tarr’s Forgotten Suns and Genevieve Cogman’s The Invisible Library. I’ve just bought the e-ARC of Lois McMaster Bujold’s new Vorkosigan book, Gentleman Jole and the Red Queen and I intend to make time to read it as soon as this first draft is finished. Any new Bujold is a buy-on-sight. She’s marvellous, both her fantasy and her science fiction.

My non-fiction reading is currently encompassing a massive selection of books about Georgian England. Winterwood is set in 1800, which is firmly Georgian, but a little before the Regency. As well as background reading on daily life, I’m also reading books on the Industrial Revolution, which is relevant to what I’m writing in Silverwolf. I’ve just found a fascinating book, published locally, on the textile trade in the Holme Valley: Wool and Worsit by Michael Day. One of my favourite finds is a free download from Project Gutenberg: Captain Grose’s Dictionary of the Vulgar Tongue, 1811. Apart from being a great reference book for language and slang of the era it’s an absolute hoot and gives you terms for things you didn’t know you needed terms for. It’s not for the prudish, however.

I can ride a horse, make a passable soup from six iron nails (as long as they’re magic) and knit a sweater without a pattern, but I can’t add a column of figures with a calculator and get the right result.

Well, naturally I’m looking forward to Winterwood’s publication day, 2nd February 2016. I’ve booked a research trip to Bath in the new year, and intend to visit all the Georgian museums I can get to. It’s one of my favourite cities. I’ll be attending Eastercon and Fantasycon which are the UK’s most literary SF conventions, and I’m hoping to attend the annual Science for Fiction Writers course at Imperial College, London, which features lectures by people at the cutting edge of all disciplines of science. Other than that I’ll have my head down, writing like mad — which I’m also looking forward to. It’s great to have a job that you love.

Jacey Bedford‘s Winterwood is published by DAW Books, and was published on February 2nd, 2016. For more on Bedford’s writing and novels, be sure to check out her website, and follow her on Twitter, Facebook and Goodreads.

One thought on “Interview with JACEY BEDFORD”