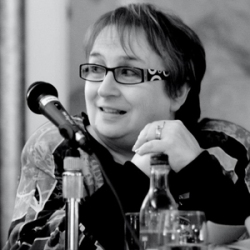 I’m a writer, a reader, a singer and an organiser. I spent twenty years ‘on the road’ with a cappella trio, Artisan and then ‘retired’ to my desk. I now organise UK gigs for folk musicians from all over the world. I’ve always written, though the literary world will be grateful that the novel I started at the age of fifteen never got beyond Chapter Six. Like most writers I suffered from the ‘is this good enough?’ syndrome, but eventually got over that when my first story was published in a DAW anthology in 1998. Since then I’ve sold close to 50 short stories on both sides of the Atlantic, but I didn’t get my first book deal (DAW again) until 2013. I now have six books (that’s two trilogies) published and, I’m working on Book Number Seven.

How would you introduce the Rowankind series to a potential reader?

The Rowankind trilogy consists of Winterwood, Silverwolf and Rowankind – in that order. When Winterwood opens it’s 1800. Mad King George is on the British throne, and Bonaparte is hammering at the door. Magic is strictly controlled by the Mysterium, but despite severe penalties, not all magic users have registered. Integral to many genteel households is an uncomplaining army of rowankind bondservants, so commonplace that no one recalls where they came from. Ross Tremayne, widowed, cross-dressing privateer captain and unregistered witch, likes her life on the high seas, accompanied by a boatload of swashbuckling, barely-reformed pirates and the jealous ghost of her late husband, Will. END_OF_DOCUMENT_TOKEN_TO_BE_REPLACED 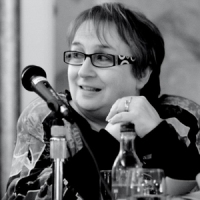 I’m a British writer who qualified as a librarian and then spent twenty years as a full-time folk singer touring the world with vocal trio Artisan. Since the band retired from the road I’ve become a booking agent, fixing music tours for other performers. I work from home and split my time between my music business and my writing. I’ve sold short stories to anthologies and magazines on both sides of the Atlantic. My first two novels for DAW, Empire of Dust and Crossways, both science fiction, came out in 2014 and 2015 respectively and Winterwood, my first historical fantasy, comes out in February 2016. END_OF_DOCUMENT_TOKEN_TO_BE_REPLACED