Let’s start with an introduction: Who is Clifford Beal?

I’m a former defence journalist turned PR professional who started writing books on weekends in what was left of my spare time. My first published book, back in 2007, was actually non-fiction 18th century maritime history.

Your next novel, The Guns of Ivrea, will be published by Solaris in February. It looks pretty awesome: How would you introduce it to a potential reader? Is it part of a series?

It’s an old-school epic fantasy set in a Mediterranean-like world very similar to our own 15th century, but inhabited by not just men and women but also merfolk and a bestiary of mythological creatures. The plot revolves around some interesting characters: A pirate turned admiral, a jaded mercenary, a monk on the run, and an inquisitive mermaid who all find an unlikely common cause as their kingdom slowly drifts towards war. It is the first in a series I’m calling “Tales of Valdur”. 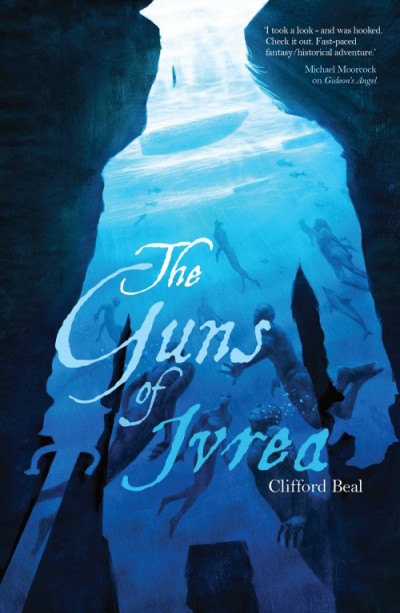 I had been writing and publishing historical fiction but still had an itch to try epic, secondary-world fantasy. But I didn’t have any ideas. One day while visiting a historic home outside London, I came across an antique decorative ceramic plate that had a medieval ship with sailors and bowmen surrounded by fanciful sea creatures including monsters and mermen riding dolphins. It was like getting struck by a lightning bolt and I thought: what if that scene, that world, was real?

It’s no surprise that there are recognizable elements of history in the novel. At heart, I’m an historian really and I love getting period detail correct to give a fictional work just that extra edge of believability.

I read The Hobbit when I was eleven or twelve and then immediately jumped into The Lord of the Rings. It was the seventies so my genre reading was centred on writers like Michael Moorcock, Roger Zelazny, Ray Bradbury, Robert Silverberg, Fritz Leiber, Katherine Kurtz, Stephen Donaldson and so many others of that era. I suppose it still colours my perception of fantasy and SF and also, quite probably, the way I write.

How do you like being a writer and working within the publishing industry? Do you have any specific working, writing, researching practices?

I love being a writer and I’ve been one most of my life in one form or another. Creative writing takes a huge amount of self-discipline though particularly on big novel-length projects. Treat it like a real job and you’re halfway there psychologically.

From day one, I knew I wanted to write books. All through school I penned short stories and such. But, looking back, I wasted a lot of time when I could have been working on a first novel. Things finally came together for me in the 90s but I didn’t get published until 2007 and for fiction until 2013. Can’t say I look back on it fondly as I realize now I became obsessed with the “great novel” instead of branching to write other things that would have been better stepping stones.

Although I’m now writing epic fantasy, the whole genre has exploded in terms of variety and has spawned a lot of niches. My first two novels were historical fiction/fantasy/supernatural/secret history but many publishers have trouble marketing crossover stuff like that. The key is in linking the reader with the right novel and that means we need the help of bloggers to get the word out. Amazon and Goodreads alone won’t cut it.

I’m currently finishing up the sequel to The Guns of Ivrea, entitled The Witch of Torinia. I have a few ideas after that’s done (including a quick mind-rinse by writing some short stories) but not quite decided what to begin next.

Have two on the trot now: The Plantagenets by Dan Jones, a great one-volume history of that dynasty, and I’m also devouring Gifts for the One Who Comes After by Helen Marshall. It’s a short story collection of fantastical, weird and beautiful fiction that is a cracking read.

Over the past 35 years, on and off, I’ve participated in medieval tournament-style combat on foot wearing plate armour. Full contact and no choreography. It’s been a great help in writing fight scenes over the years but I’m getting a bit too old and slow now. Actually, thinking about it, readers may not actually find all of this very surprising.

You mean apart from meteoric sales of my books? Then it would probably be some summer holidays and thinking about the next Star Wars film this winter.

The Guns of Ivrea is published tomorrow by Solaris. Here’s the synopsis:

A swashbuckling new sea-faring fantasy series begins! A gritty, thrilling epic that reads like a cross between Patrick O’Brian and George R.R. Martin, bringing together the tang of the sea and the taste of cold steel.

Acquel Galenus, former thief and now monk of no particular skill, indifferent scribe and even worse chorister, uncovers a terrible secret under the Great Temple at Livorna that could shiver the one faith to its core. A secret that could get him killed. A secret that could enable an older, more sinister form of worship to be reborn…

Pirate princeling Nicolo Danamis, mercenary to the King and captain of the largest fleet in the island kingdom of Valdur, has made one deal too many, and enemies are now closing in to destroy him.

And Citala, fair-haired and grey-skinned, the daughter of the chieftain of the Merfolk who inhabit the waters of Valdur, finds herself implacably drawn to the affairs of men. She puts events in motion that will end her people’s years of isolation but that could imperil their very existence…

All their fates will intertwine as they journey through duchies and free cities riven by political intrigue, religious fervour, and ancient hatreds. Alliances are being forged anew and after decades of wary peace, war is on the wind once again…