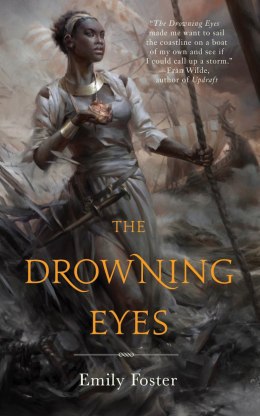 When the Dragon Ships began to tear through the trade lanes and ravage coastal towns, the hopes of the arichipelago turned to the Windspeakers on Tash. The solemn weather-shapers with their eyes of stone can steal the breeze from raiders’ sails and save the islands from their wrath. But the Windspeakers’ magic has been stolen, and only their young apprentice Shina can bring their power back and save her people.

Tazir has seen more than her share of storms and pirates in her many years as captain, and she’s not much interested in getting involved in the affairs of Windspeakers and Dragon Ships. Shina’s caught her eye, but that might not be enough to convince the grizzled sailor to risk her ship, her crew, and her neck.

This was an interesting novella. As with the previous Tor.com novella I read, Alter S. Reiss’s Sunset Mantle, it is an interesting introduction to a fantasy setting by a talented new author, with plenty to offer fans of fantasy and shorter fiction.

However, The Drowning Eyes also suffers from one of the same weaknesses as Sunset Mantle: it feels too short. Partly, this is because I enjoyed the setting so much, I just wanted to read more. At the same time, given the book’s brevity, the narrative balance felt off — it’s only about two-thirds into the story that things start to happen, after a fair bit of set-up. That being said, I didn’t feel like I had got to know the character as well as I would have liked — to begin with, the crew of the ship Shina hires felt interchangeable, and not distinct enough. I finished the book feeling like I had read an abridged version of a longer novel.

I really liked the premise behind The Drowning Eyes — it’s quite a classic fantasy journey type of story, but with some well-considered and developed innovations to make it interesting and stand out from the crowd. I enjoyed the way Foster devised the weather magic system — by turns fantastical and attractive (I live in Canada, I always want to control the weather to my own ends), but with a brutal and horrifying component. The author’s prose is well-composed and flows pretty well, although there were a couple of scenes that felt a bit truncated or choppy. I enjoyed the jump forward in time for the final moments in the novella, and the way the characters had changed (albeit only slightly in most cases).

I hope Foster gets the chance to write and publish more — whether it is in the same setting or a different one, I’m certainly interested in reading more by her.

The Drowning Eyes is published by Tor.com in January 2016.