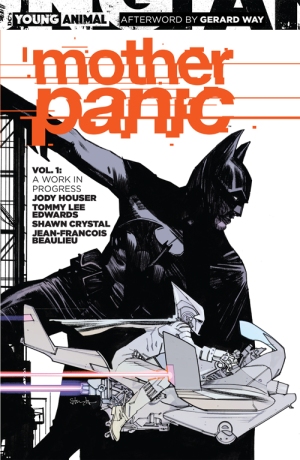 The shadow of the Bat falls over all of Gotham City, from its dark alleys to its glittering high-rises. But a new vigilante has just stepped away from that shadow, and she has her own brand of violent retribution to deal out to the city’s corrupt elites.

Meet Violet Paige, a rich young celebutante with a bad attitude and a worse reputation. No one would ever suspect that this tabloid-fodder wild child has a secret hidden beneath her spoiled heiress exterior — a secret that has driven her to become the terrifying force of vengeance against her privileged peers known as Mother Panic!

But even as Violet launches her all-out assault on the rich and twisted, her shaky allies threaten to betray her, and every one of Gotham’s guardians — from Batwoman to the Dark Knight himself — is hot on her trail. Will Mother Panic continue to strike terror into her enemies’ hearts? Or will her violent quest for justice reach an equally violent end?

This is the first title that I’ve read from DC’s new Gerard Way-controlled Young Animal imprint, so I wasn’t sure what to expect. I had been under the false impression that this was aimed at younger readers. After just a few pages, I realized this was very much not the case. Aside from the occasional swearing, this is a pretty brutal series. It also a very intriguing first arc. END_OF_DOCUMENT_TOKEN_TO_BE_REPLACED