The shadow of the Bat falls over all of Gotham City, from its dark alleys to its glittering high-rises. But a new vigilante has just stepped away from that shadow, and she has her own brand of violent retribution to deal out to the city’s corrupt elites.

Meet Violet Paige, a rich young celebutante with a bad attitude and a worse reputation. No one would ever suspect that this tabloid-fodder wild child has a secret hidden beneath her spoiled heiress exterior — a secret that has driven her to become the terrifying force of vengeance against her privileged peers known as Mother Panic!

But even as Violet launches her all-out assault on the rich and twisted, her shaky allies threaten to betray her, and every one of Gotham’s guardians — from Batwoman to the Dark Knight himself — is hot on her trail. Will Mother Panic continue to strike terror into her enemies’ hearts? Or will her violent quest for justice reach an equally violent end?

This is the first title that I’ve read from DC’s new Gerard Way-controlled Young Animal imprint, so I wasn’t sure what to expect. I had been under the false impression that this was aimed at younger readers. After just a few pages, I realized this was very much not the case. Aside from the occasional swearing, this is a pretty brutal series. It also a very intriguing first arc.

The series follows the adventures of a new anti-hero, Violet Paige. She’s an interesting character, and offers a good foil for Gotham’s bat-family. She’s of a new generation, created with today’s celebrity and social media and mores in mind. She has a traumatic childhood and, as we learn over the course of the book, her teen years were brutal and psychologically damaging. How might someone of this generation react to such traumatic events, if they had the means (or nearly the means) of a Bruce Wayne? Into what kind of hero might they develop? (I won’t go into any more detail, to avoid spoilers.)

I thought the artwork was excellent. To begin with, it seemed reminiscent of Riccardo Burchielli’s in DMZ, but far more experimental — perhaps as if he were channeling J.H. Williams III? However, unlike Williams III’s Batwoman, the artwork in Mother Panic also feels a little more busy than innovative. Still, it’s very good, and it caught my attention right away (see below for a less-experimental example). Perhaps as a result of this busy style, the switches between the past and present weren’t as clearly indicated as they could have been. The style of the artwork shifts to something more conventional (but no less moody) in the second half of the book, which made it far easier to follow. The colouring throughout is superb — vivid yet also dark, a nice quality. 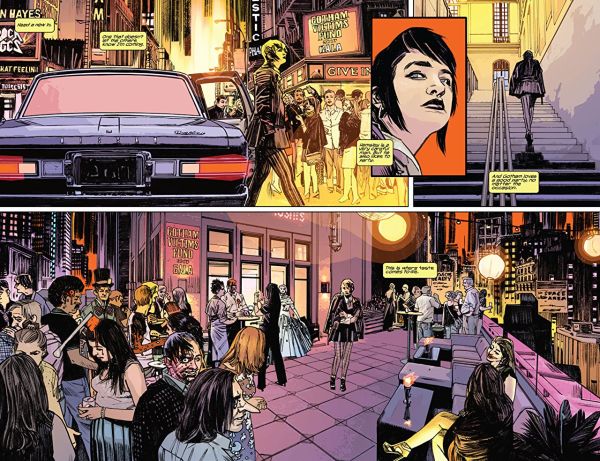 I enjoyed how brash Paige is in this book. She doesn’t care about other people’s sense of propriety or mores, and she certainly doesn’t approve of the Bat-family prying into her affairs or trying to control her vigilante war. She shares many of Bruce Wayne’s qualities — at least, the partying, spoiled and self-involved version we sometimes see on the page and screen.

The book sets up the future volume, but manages to provide a pretty complete story of its own. There is still a fair bit of background to fill out, and plenty of room to expand the character and her supporting cast. I’ll definitely be checking out the second volume, which is due to be published in February 2018. If you like your comics modern and gritty, then I think you’ll find a lot to like in Mother Panic.

Mother Panic is published by Young Animal/DC Comics, and is out now.