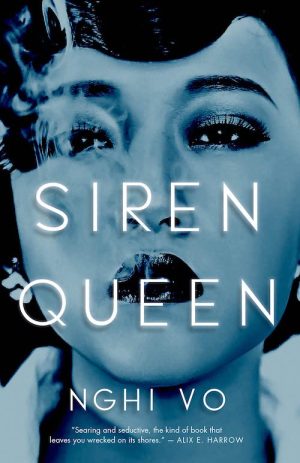 The magic and horror of movie-making…

It was magic. In every world, it was a kind of magic.

“No maids, no funny talking, no fainting flowers.” Luli Wei is beautiful, talented, and desperate to be a star. Coming of age in pre-Code Hollywood, she knows how dangerous the movie business is and how limited the roles are for a Chinese American girl from Hungarian Hill — but she doesn’t care. She’d rather play a monster than a maid.

But in Luli’s world, the worst monsters in Hollywood are not the ones on screen. The studios want to own everything from her face to her name to the women she loves, and they run on a system of bargains made in blood and ancient magic, powered by the endless sacrifice of unlucky starlets like her. For those who do survive to earn their fame, success comes with a steep price. Luli is willing to do whatever it takes — even if that means becoming the monster herself.

Siren Queen offers up an enthralling exploration of an outsider achieving stardom on her own terms, in a fantastical Hollywood where the monsters are real and the magic of the silver screen illuminates every page.

“The magic of movie-making”: we’ve all heard people say and write things about Hollywood that sprinkle stardust and the otherworldly metaphors onto filmmaking. In Siren Queen, Nghi Vo asks readers to consider what if it wasn’t actually metaphorical? A clever novel that follows the career of screen star Luli Wei, I enjoyed this.

We meet Luli Wei as a child, and at roughly the same time as when she discovers and falls in love with the idea of becoming a Hollywood star. After a series of fortuitous events, she is taken under the wing of a director, and slowly introduced to the world of movie-making: glamour, hard work, the magical, and also the lurking horror underneath. This horror is acknowledged by everyone involved, albeit in veiled comments. Herein lies of one of the best things about Siren Queen: Vo’s taken so many of the traditional metaphors we use to discuss, describe and admire the business, but made it so that they’re not metaphors. Sell your soul for success? Sure. Suck the life out of you? Quite possibly. It’s a fantastic element, and the author does a great job of weaving into the setting that is a few degrees from our own.

The otherworldly is not overbearing, and often only manifests in small ways (a lot happens off-screen, as it were). It is not, however, the primary thrust of the story. That is Luli and her experiences: her life, her loves, her work, and more. There’s plenty of commentary on the hypocrisies and prejudices of the movie industry (many of which continue to manifest and/or echo today).

… we understood immortality as a thing for men. Men lived forever in their bodies, in their statues, in the words they guarded jealously and the countries they would never let you claim. The immortality of women was a sideways thing, haphazard and contained in footnotes, as muses or silent helpers.

Luli has a number of obstacles in the way of her becoming the star she wants to become: she’s a woman, she’s of Asian descent, and she’s not straight. Nevertheless, she knows what she wants, and manages to chip away at these as obstacles, forging her own path towards success. It’s a difficult and rocky road, to be sure. Luli is determined to break the mould for actors like her, to not conform to the tired and limited stereotypes and typecasting that she might have been destined to suffer. Interestingly, it takes her down an unexpected path to monster and horror pictures.

“No maids, no funny talking, no fainting flowers,” I said. “That’s the deal I struck with Wolfe, and so I guess monster was what was left.”

Over the course of the story, Luli meets a number of people, some in the same predicament, others unwitting or indifferent members of the Hollywood ecosystem. Vo shows readers the camaraderie that can form between those who aren’t at the top of the heap; similarly, the petty jealousies and sometimes manufactured fights that can trip up the unwary. It’s all told in a fluid, engaging style — the novel is well-balanced, and aside from some minor moments that dipped in momentum, I always looked forward to picking up and continuing to follow Luli’s story.

Siren Queen is a fantastic blend of a novel: a classic story of Golden Age Hollywood ambition, told through an urban fantasy/horror lens. If you’re looking for something a little different, then I’d certainly recommend checking this out.

Nghi Vo’s Siren Queen is due to be published by Tor.com in North America and in the UK, on May 10th.

Also on CR: Review of The Empress of Salt and Fortune