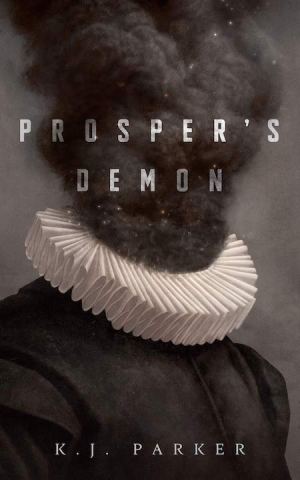 Another magnificent novella from the master of the form

In a botched demonic extraction, they say the demon feels it ten times worse than the man. But they don’t die, and we do. Equilibrium.

The unnamed and morally questionable narrator is an exorcist with great follow-through and few doubts. His methods aren’t delicate but they’re undeniably effective: he’ll get the demon out — he just doesn’t particularly care what happens to the person.

Prosper of Schanz is a man of science, determined to raise the world’s first philosopher-king, reared according to the purest principles. Too bad he’s demonically possessed.

I love K.J. Parker’s short fiction. In addition to his excellent prose, the author is able to pack in so much into his short stories and novellas: they are humorous, subversive, and peppered with historical allusions. Prosper’s Demon is no different. I thoroughly enjoyed this.

I have an idea you aren’t going to like me very much. That may prove to be the only thing we’ll have in common, so let’s make the most of it.

As with many of Parker’s novellas, his protagonist in Prosper’s Demon is a version of an anti-hero. He makes mistakes, he harbours prejudices and biases. He’s not afraid of voicing them. He’s only mildly ashamed of the awful things he’s done. He excuses his actions because the ends justify the means. I’m not sure he can count as “unreliable”, when he seems so ready to share his bad behaviour.

In this fantasy world, demonic possession is real. The medieval tendency to blame all maladies and mental illnesses (not to mention inconvenient character flaws) on demonic possession is real in this world. There are, however, people born with the ability to not only see these demons but also exorcise them. Unfortunately for the demon and host, the process of extraction can be excruciating and extremely dangerous for the host (the demons, though, cannot die). The narrator explains his profession, as well as how his abilities developed — in addition to the ways in which he mishandled past experiences and extractions.

Parker quickly establishes the rules of this world, and where and how his protagonist fits. We learn of an ongoing grudge between the protagonist and a particular demon, and this leads the story to the royal palace and the offices of a man named Prosper: genius, inventor, adviser to the rulers. And, as mentioned in the synopsis: possessed. What is an exorcist to do? I won’t say anymore, because that would spoil the fantastic second half of the novella, which builds to a rather shocking ending.

Partly, he said, he enjoyed my company; it wasn’t often that he had a chance to talk to someone whose mind was so little cluttered with education or accepted opinions— (“You mean I’m stupid.” “Good heavens, no. Just ignorant.”)

Prosper’s Demon is an engaging, often very funny novella about possession, ambition, the value of art, and ingenuity. The characters are fantastic and fascinating. I loved this. Very highly recommended.

K.J. Parker’s Prosper’s Demon is due to be published by Tor.com in North America and in the UK, on January 28th, 2020.

Also on CR: Reviews of The Devil You Know, The Last Witness, Downfall of the Gods, and My Beautiful Life