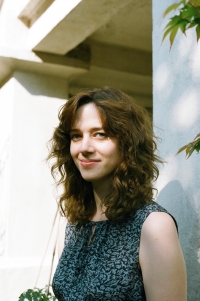 Let’s start with an introduction: Who is Hanna Jameson?

I’m a writer. 28. University dropout and current history student. I’ve written four books and lost an award for one of them! I like bourbon, true crime, and ghost stories.

Your latest novel, The Last, was recently published by Viking in the UK. It looks really interesting: How would you introduce it to a potential reader?

The Last is a murder mystery set in the months immediately following nuclear war, narrated by an American academic stranded in a remote hotel in Switzerland.

I was inspired to write The Last by a few things, as novels are generally the product of several disparate ideas falling together rather than the outcome of one event. I was inspired by the hellish state of discourse following the 2016 US election, nuclear war jokes on Twitter, a historian friend of mine telling me about a long commute between different US states that got me thinking about the theme of displacement, J.G. Ballard, Stephen King, a curious true crime case in LA where the body of a girl was found in a rooftop water tank of what was then The Cecil Hotel. I also frequently draw inspiration from my own rage, despair, and sadness. END_OF_DOCUMENT_TOKEN_TO_BE_REPLACED