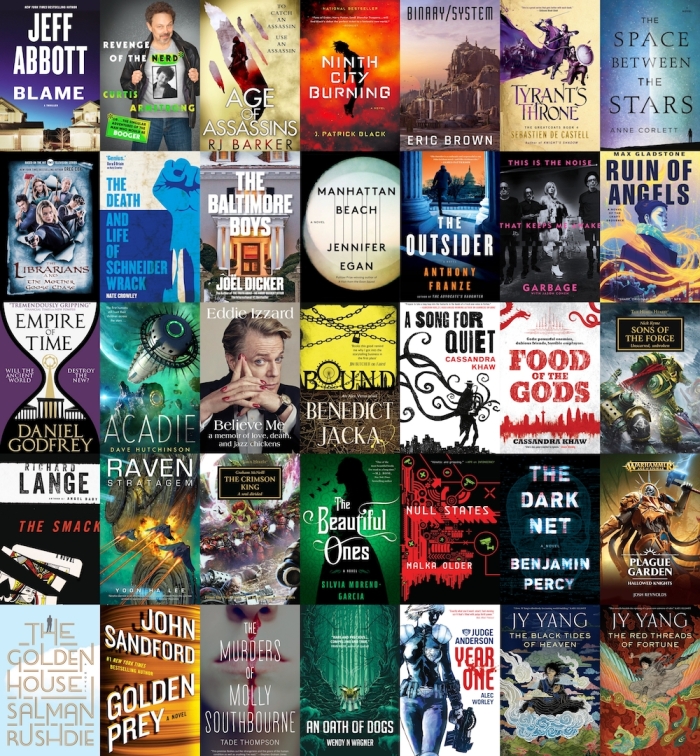 END_OF_DOCUMENT_TOKEN_TO_BE_REPLACED

Last week, I published my review of Joël Dicker’s debut novel and international sensation, THE TRUTH ABOUT THE HARRY QUEBERT AFFAIR. A thoroughly enjoyable read, the novel was provided for review by Dicker’s UK publisher, MacLehose Press (an imprint of Quercus). This week, I have a video interview with the author to share, provided by his American publisher, Penguin:

August 30, 1975. The day of the disappearance. The day a small New Hampshire town lost its innocence.

That summer Harry Quebert fell in love with fifteen-year-old Nola Kellergan. Thirty-three years later, her body is dug up from his yard along with a manuscript copy of his career-defining novel. Quebert is the only suspect.

Marcus Goldman – Quebert’s most gifted protégé – throws off his writer’s block to clear his mentor’s name. Solving the case and penning a new bestseller soon blur together. As his book begins to take on a life of its own, the nation is gripped by the mystery of ‘The Girl Who Touched the Heart of America’. But with Nola, in death as in life, nothing is ever as it seems.

This is not an easy book to review. It has been on my radar for a while, and I’ve been eager to read it ever since I saw it mention on (I think) The Bookseller. I would say it mostly lived up to my expectations. It is expansive, brilliant, absorbing, briskly-paced, but also flawed and at times frustrating, even aggravating. A confounding novel to review. Despite the issues I had with certain elements of the novel and story, it was utterly gripping, and I thoroughly enjoyed reading it.

First of all, I very much enjoyed reading it – I was always eager to get back to it, when life forced me to stop reading (sleep, meetings, etc.). Dicker has written an engaging thriller, one that brings a decades-old disappearance back into the spotlight, as a beloved member of a small town community – the titular Harry Quebert – is accused of two shocking, heinous acts: continuing an affair with a fifteen year-old girl, and also her murder. What follows is an investigation by the accused’s protégé (of sorts), in an attempt to clear his name and salvage his reputation. Along the way, things get very messy indeed. Threats and revelations abound, which keeps readers guessing all the way through – the truth is only revealed in the final 10% of the novel (I read it as an eARC). I really liked the way Dicker keeps throwing out red herrings, and also that Marcus’s investigation does one hell of a lot of damage along the way: relationships are shattered, secrets (related and not) are brought into the light, and the competing agendas at work tear the community apart.

Speaking of these competing agendas: there are times when Dicker’s character come across as cartoonish, and not in a good way. For example, Marcus’s editor/publisher is rather unrealistic – as if every commercial consideration that any publisher would need to take into account is exaggerated and overblown. He is an awful person, and there’s no reason to disbelieve the existence of such characters, but he does certain things that seem so stupid. Considering he’s able to offer $2,000,000 dollar advances, he comes across as singularly devoid of the emotional intelligence to be a high-powered, successful publisher in New York. The publishing aspects of the novel were, actually, the most lacking in verisimilitude, which was a real pity.

Dicker’s writing is, for the main, excellent and the translation is superb, too. The pacing is superb, and I was absolutely captivated by the narrative and investigation. At the same time, there were instances when the dialogue – especially that featuring Marcus’s editor, Nola and select other characters – appears melodramatic and just not very good. At the risk of sounding condescending or unfair, I can’t help but wonder if this is an instance of lost-in-translation?

There were times when the investigation – official and Marcus’s amateurish actions – veered off in strange ways. Partly, this was to allow for the frequent upending of their attempts to get to the bottom of things. For the main, it worked very well, but there were certainly times when I became frustrated. Without shedding too much light on particulars, some of the switcheroos felt forced. In addition, some of the characters are morons – especially when it comes to the writing of the book-within-the-book. Marcus and his editors commit some astonishing failures and cock-ups, one that didn’t ring true at all. One in particular, very near the end, is an unforgivable oversight that I just can’t see happening in real life – something that could so easily have been rectified over the course of the investigation. Frustrating moments like this robbed the novel of some of its impact.

This review is, I recognise, rather vague on the details. This is because, despite this flaws – and some might consider them huge – I could not stop reading. In terms of sheer enjoyment, The Truth About the Harry Quebert Affair is one of the most enjoyable books I’ve read in a while. Given how picky I can be, and how easy gaffs and inconsistencies can ruin a novel for me, I think that’s saying something. It is not surprising to me that this has been such a success.

If the goal of any novel should be to entertain, be thought-provoking, and get the reader thinking, this this novel succeeds on every level. That is has some shortcomings is made almost irrelevant by just how good the rest of it is.

Gripping and absorbing, this is well worth reading. Definitely recommended, but be warned that there are some niggles.

I’ve been seeing a lot of buzz surrounding Joël Dicker’s latest novel, The Truth About the Harry Quebert Affair. Last year, I started reading more (literary) fiction, and I’ve become as keen on finding new novels in all genres, and not just SFF, to feature on here. I’ve become particularly interested in American literary fiction – author such as Michael Chabon, Donna Tartt, Richard Russo, and Claire Messud to name but four (all but one of whom have featured on the blog already). It was therefore interesting to me that Dicker’s novel has created such a storm (it has sold over two million copies on the continent) and that it has even been hailed as having “all the elements of the Great American novel” (La Croix), despite Dicker actually being Swiss. Now that Maclehose Press has unveiled the UK artwork for the novel, I thought it a good time to post a quick something about it.

The novel is translated by Sam Taylor, who also translated HHhH. Here’s the synopsis…

Marcus Goldman, the toast of the New York literary scene, is at his wit’s end after being struck by writer’s block. Desperate not to lose his new found fame and in search of inspiration he decides to spend a few weeks in New Hampshire at the home of Harry Quebert, world famous author and his mentor from university.

During his stay, Marcus discovers that in 1975, aged 34, Harry had an affair with 15 year old Nola Kellergan. The summer of their affair, Nola disappeared after she was seen running through the woods, covered in blood. No one has seen Nola since and no one knows what happened.

Then the unthinkable happens, 33 years after her disappearance, the body of Nola Kellergan is found in Harry’s garden. Determined to prove Harry’s innocence, Marcus gets embroiled in the murder case of the century, while everywhere in America people are asking: Who Killed Nola Kellergan?

Not just a book about an unsolved murder case, The Truth about the Harry Quebert Affair explores the price of fame and the seduction of success, the ferocity of the publishing industry and the power of the media, love in all its forms and what it means to be a truly great writer.

The Truth About the Harry Quebert Affair is published in the UK by Maclehose Press, in May 2014.