Let’s start with an introduction: Who is Christopher Husberg?

Well I’m a soon-to-be published fantasy author, which is sort of a surreal thing to say! I’m also a husband, stay-at-home dad, desultory blogger, Dota 2 hobbyist, and self-proclaimed expert on all things regarding Buffy the Vampire Slayer. Pastimes include reading, hiking, running, watching great movies and TV, and generally having fun times with family and friends.

Your debut novel, Duskfall, will be published by Titan Books later this year. The first in your Chaos Queen series, it looks rather interesting: How would you introduce it to a potential reader?

It depends on the person! One of the things I like about Duskfall is that I think it has quite a bit to offer. Want action? It’s got an amnesiac assassin trying to escape his former employers as well as his dark past. Want magic? There’s a young woman who develops a crippling addiction to psimancy (the magic in the books) and has to learn how to curb her dependency or succumb completely — and either way, she’ll likely change the world while she’s at it. Want something more existential? There’s a priestess investigating a heretical uprising, the leader of which turns out to be her own sister. Oh, and it’s got vampires. Something for everyone! END_OF_DOCUMENT_TOKEN_TO_BE_REPLACED 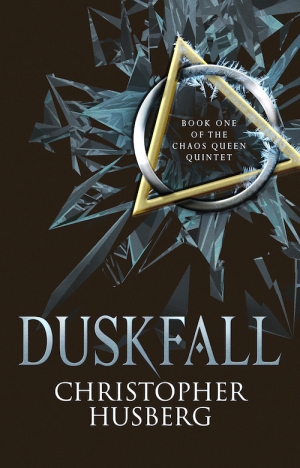 Titan Books unveiled this cover only a couple hours ago, and it’s quite nice. Duskfall is the first novel in Christopher Husberg’s Chaos Queen Quintet series (nice alliteration). I quite like the simplicity of the cover, with nary a Hooded Man in sight… Here’s what it’s about:

Stuck with arrows and close to death, a man is pulled from the icy waters of the Gulf of Nahl. As he is nursed back to health by a local fisherman, two things become very clear: he has no idea who he is, and he can kill a man with terrifying ease.

The fisherman is a tiellan, a race which has long been oppressed and grown wary of humans. His daughter, Winter, is a seemingly quiet young woman, but behind her placid mask she has her demons. She is addicted to frostfire — a substance that both threatens to destroy her and simultaneously gives her phenomenal power.

A young priestess, Cinzia, hears the troubling news of an uprising in her native city of Navone. Absconding from the cloistered life that she has kept for the last seven years, she knows she must make the long journey home. The flames of rebellion threatening her church and all that she believes in are bad enough, but far worse is the knowledge that the heretic who sparked the fire is her own sister.

These three characters may have set out on different paths, but fate will bring them together on one thrilling and perilous adventure.

I think this sounds quite interesting. Dusk fall is due to be published by Titan Books in the UK and US, in June 2016.