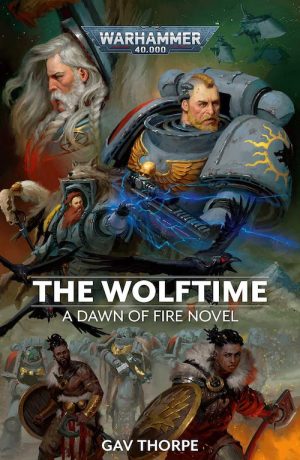 Discover how the Cicatrix Maledictum affects even the most stubborn and steadfast of the Imperium’s warriors, as traditions the Space Wolves hold dear may be stopping them from defending the Imperium to the best of their abilities.

The Indomitus Crusade has brought the Emperor’s vengeance to thousands of star systems. The fleets and armies under the leadership of Roboute Guilliman fight for the survival of humanity against the forces of the Chaos Gods. But the traitors and heretics are not the only foe looking to destroy the rule of Terra.

Xenos prey on human worlds in numbers not seen for millennia. Worst amongst them are the rampaging orks, whose migration conquests threaten to reverse the many gains of Fleet Primus. And their throaty bellows carry a name not heard in years, of destruction made flesh, a bestial warlord without peer: Ghazghkull Mag Uruk Thraka.

In the midst of this brutal tide is Fenris, the world of the Space Wolves. Depleted by ever-greater demands on their warriors, called upon by the Legion-breaker Guilliman, the Wolves of Fenris face a momentous decision. Grimnar and his counsellors must choose whether their fate is to ally themselves with an ancient rival and risk all that makes them the Vlka Fenryka or to accept their demise and wait for the return of their own primarch and the coming of the Wolftime.

I’ve very much enjoyed the recent batch of WH40k releases — in particular, those novels and stories that have expanded fans’ understanding of what has happened since the fall of Cadia and the opening of the Cicatrix Malediction. In Guy Haley’s Dark Imperium trilogy, and the first two books in the Dawn of Fire series, we’ve come to learn a fair bit about this “present” of the WH40k universe. In this novel, Thorpe does a great job of giving us a narrower, though no less illuminating look at how the changes in the universe have affected one of the most popular factions: the Space Wolves. I very much enjoyed this.

There are a few main narrative strands that make up the novel. One follows Roboute Guilliman’s journey as the Indomitus Crusade continues on its path across the galaxy, attempting to cement ties between the various Imperial factions, planets, and galactic regions. Central to that goal is strengthening the Space Marine chapters with the vast number of “Unnumbered Sons”, the Primaris Marines who have yet to be assigned to their appropriate chapters, or formed into new chapters. Guilliman’s portion of the story sees him grappling with the vast undertaking he’s overseeing and masterminding, and also the smaller moments as he attempts to convince others to the wisdom of his actions and plan, as well as training those who can go on to spread the word and mission to others. (He has a Raven Guard adjutant in this novel, who I rather enjoyed reading about. Hope he resurfaces elsewhere.)

Another strand of the novel follows a squad of Primaris “Space Wolves” — placed in quotation marks because, it turns out, the Space Wolves are incredibly suspicious of not only the Imperium in general, but especially Guilliman’s agenda. (There’s bad-blood between the Wolves and the Ultramarines since the end of the Horus Heresy, and the breaking of the Legions into smaller chapters.) Some of this suspicion is long-standing, as they have always been an unorthodox force, and fiercely dedicated to their traditions, idiosyncrasies, and mysticism. The Primaris, led by Gaius, just aren’t Fenrisians, and they struggle to be accepted. It’s also a perfect example of “just because you’ve read a book about it, doesn’t mean you truly understand it”. The journey that Gaius goes on is particularly interesting, and he was definitely the character I was rooting for the most.

The firstborn Wolves (what the original Space Marines are now referred to) were not what I was expecting. I don’t mean in their mannerisms, style, or ways of operation. Rather, I mean their collective and individual reactions to and relationships with the Primaris Marines. Some are vehemently opposed to their existence and incorporation into the chapter — none more so than Logan Grimnar, the leader of the Wolves. On a squad-level, though, Gaius and his squad are received with a mixture of cautious curiosity, generosity, and plenty of gentle ribbing. On a number of occasions, firstborn Wolves teach the Primaris how to act more like Space Wolves, or provide constructive criticism. It was really interesting to see how different the two groups are, and the limitations that the Primaris have not (at this point in the meta-story) had the chance to overcome. Ultimately, though, there is a strong resistance to the newcomers’ presence and attempts to assimilate and bond.

“Stop trying so hard… Stop trying to be something you can never be. The genes, maybe they’re from the Wolf King, maybe they even have the Canis Helix, so you can be sons of Russ for all I care. But you’re not Fenrisian. You never formed a shield wall in a blizzard, or stood the deck of a jarlship heaved over by a kraken tentacle. Never tasted the air or felt its wind on your cheek. You weren’t raised by this world. Ease your burden. You can’t be Wolves of Fenris, no matter how much you practice.”

In some ways, the novel becomes an examination of what it means to join a new group (or try to, anyway), or a new place.

It was the things that came from before being brought to the Aett that were the hardest to replicate. The intuition that bound the Fenrisians together, the wurgen that was individual to each warrior, yet followed a pattern recognisable to all. The experience of standing shoulder to shoulder with spear and shield, or hunting with bows, and translating that sensation to bolters and plasma guns. The hundreds of years spent as a Wolf of Fenris built on the twelve or thirteen as a child of Fenris. Could Gaius and the other Unnumbered Sons ever get that? Future generations raised from the world would benefit from the same upbringing and enhancements, but the Firstwolves and their generation would always be an aberration. Upplanders in wolves’ clothing.

Notes that suggest how difficult and un communications are during this time. It is clear there have been communications breakdowns within the Imperium, with agendas and motivations suspected. In particular, Thorpe delves into the fractures between the Primarch and the Adeptus Custodes — it’s clear that the Custodians, the final line of protection for the Emperor, are suspicious of Guilliman’s agenda. They are preparing for the time when he might decide that he should lead the Imperium. In other words, they are waiting to see if Imperium Secundus (see the Horus Heresy series) was more than what it appeared, and if Guilliman might ultimately follow a path similar to Horus.

The tribune’s antipathy towards Guilliman was the reason Trajann Valoris had placed him in his ascended position, and it was not a Custodian Guard’s role to question the decisions of his superiors. It was inconceivable that Colquan would directly endanger the crusade by killing Guilliman just as a precaution, but the level of provocation required for the tribune to act was set low.

In fact, the novel contains a fair amount of pointed criticism from the Custodians — Thorpe does a great job of showing us their arrogance and belief in their own superiority (not exactly unjustified, but still off-putting and obnoxious). For example, there’s a fair amount of criticism levelled at the Inquisition, who are described as “nothing more than self-appointed intellectuals and firebrands guessing at the Emperor’s Will.” I like that the authors writing for WH40k are spending some more time examining the fractures within the Imperium, throwing some light on the vicious, widespread, and often petty politics. I was quite surprised to read about how developed the Custodians’ plans were for countering any possibility that Guilliman might step out of bounds — an eventuality that they seem to think is all-but-guaranteed.

There’s plenty of action in the novel — big battles with orks, but also smaller skirmishes, as well as more personal battles. (I don’t want to provide any more detail, here, because that could result in some spoilers for one character’s arc.) Thorpe brings a very good, well-placed sense of humour, too — bringing some welcome levity to an otherwise quite serious novel. In part, this comes from the Wolves’ more relaxed manner, but also from a few human characters who point out some absurdities, but also poke fun at their “betters”.

If you’re a fan of WH40k fiction, I’d certainly recommend the Dawn of Fire series. If you’ve read the others novels (both or just one), then I would also recommend The Wolftime. It at times felt a bit separate from the events covered in Avenging Son and The Gate of Bones, but ultimately the story comes back to key events and larger implications already seeded. This novel does everything I’d hoped it would: moved the story forward, reintroduces some fan-favourite characters (many of the most famous Wolves make at least a cameo), and expands our understanding of the setting. I don’t think this is the last one in the series, but I am certainly looking forward to what happens next in the ongoing WH40k story.

Gav Thorpe’s The Wolftime is out now, published by Black Library in North America and in the UK.

Also on CR: Interviews with Gav Thorpe — 2011 and 2016; Reviews of Deliverance Lost, Angels of Caliban, and The First Wall
Dawn of Fire on CR: Reviews of Avenging Son (Haley) and The Gate of Bones (Clarke)