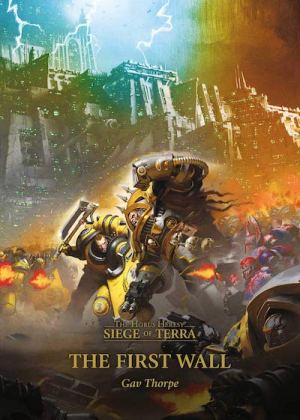 The outer defences have fallen, but the walls of the Imperial Palace stand. To break them, the Traitors need their most devastating weapons – and so the Lion’s Gate Spaceport must be theirs…

The war for the fate of mankind blazes on. Though the outer defences have fallen, the walls of the Palace itself remain inviolate as Rogal Dorn, the Praetorian of Terra himself, uses every known stratagem and ploy to keep Horus’s vast armies at bay. In Perturabo, the Traitor siegebreaker, Dorn faces an adversary worthy of his skill. A terrible, grinding attrition ensues. The crucial battle for the Lion’s Gate space port is at the heart of this conflict. With it in their possession, the Traitors can land their most devastating weapons on Terran soil. Dorn knows it must not fall. But with enemies attacking from all sides, and the stirrings of the Neverborn drawn to the slaughter, can the Imperial defenders possibly prevail?

This is the third novel in the Siege of Terra series, the closing act of the epic Horus Heresy. The traitors have broken the planet’s outer defences, and are in the process of breaking into the continent-sized Imperial Palace. A bit of a slower novel than the first two in the series, but still an excellent addition to the series.

There are three threads to this novel. The first focuses on the battles between Perturabo’s traitor Iron Warriors and Dorn’s loyalist Imperial Fists. Another looks at the growing influence and issues caused by the rise of the new faith based on the teachings in the Lectitio Divinitatus, and its assertions that the Emperor is a god. The final thread looks at a newly-formed regiment and its journey from its home (in what was Africa) to reinforce the Imperial Palace.

While a small portion of the novel early on is told from Perturabo’s perspective, the majority of our engagement with the primarchs is through the eyes of their warriors and others who come into contact with them. Thorpe does a fantastic job of showing how Perturabo’s insecurities have come to consume him, coupled with his towering arrogance to form a toxic brew that subordinates all else to elevating himself and destroying Dorn (as the yin to his yang, it’s only natural that the two of them become mortal enemies during the Heresy). Forrix, a warsmith we spend a fair amount of time with offers some interesting insight into the decline of his primarch. He is unnerved by his Primarch’s obsession and disregard for the lives of his legionnaires.

For a few seconds Forrix remembered his commander as he had been at the height of his power and insight; before the Warmaster had corrupted him, turned ambition into arrogance, curiosity into obsession.

Given this overwhelming obsession, the following comment from Horus was rather interesting:

‘Perturabo is the sanest of my brothers. His agenda is solely to serve me, to prove himself as strong as he believes he can be. You have already seen how the others work at cross purposes except under firm hand. The Lord of Iron must be allowed his time of glory or he will lose faith. And if I lose my reliable commander, what can I achieve with unreliable ones?’

One of the problems Horus and the traitors are having to deal with is that the daemon Primarchs — Fulgrim, Angron, Mortarion and Magnus — are not as pliable as they once were. Angron is in an eternal rage, Fulgrim is off indulging in his whims and ignoring orders, and Magnus is seemingly absent. Mortarion… well, he’s about and making pestilent mischief. Horus’s withdrawal, supposedly to wage the war against the Emperor on the psychic plain, has left the traitors subject to the whims of its commanders, with minimal input from the Warmaster. It’s sort-of working at the moment, but it’s clear that the non-Primarch commanders are starting to worry about the overall war efforts.

As has become normal for me, I prefer spending time with the traitors than the loyalists — not that the latter is boring, but the corruption of the traitors, whether slow or extreme has been handled very well by all of the authors involved in the series. In part, it’s because I have become so familiar with the characters — from my reading before the Horus Heresy series, but now over the course of 54 Heresy novels, the few Primarch-specific novels, and countless short stories.

Through Abaddon’s eyes, we see the continued corruption of Horus, as well as his growing concerns about what is happening to the Warmaster. It’s clear that the Siege of Terra series is not only bringing the Horus Heresy to a close, but establishing the events, doubts, and psychology that lead Abaddon along the path he ultimately takes. (In particular, his break with the legacy of his Primarch.) There is, perhaps, an echo of the break between Horus and the Emperor. He is starting to learn more about his fate, mainly through cryptic hints and gnomic statements from Layak, the Word Bearer who has become his unwanted shadow.

The story dedicated to the spread of the Lectitio Divinitatus (awkwardly, a book written by arch-traitor Lorgar) adds some new layers to the mythology of the setting. After all, we know how it “works” in the 40k era, and there had to be a moment when we started to see the inklings of that emerge in the Heresy era. Malcador and the Custodians are brought into mysterious, possibly daemonic shenanigans happening among the citizenry of the Palace. I liked what Thorpe did with this thread, moving our (and the Custodians’) understanding of faith in the grim, dark far future.

The thread focused on the new regiment was pretty interesting, but felt quite a bit slower than the other two. That being said, Thorpe does a number of interesting things with the characters. One I can’t mention, because it’s a big spoiler, while the other was just an interesting, unexpected inclusion: given the long journey the characters are embarking on, it was unexpected (for a Black Library novel) for two of them to forge a romantic connection. It doesn’t take up much of the story, but it was an excellent inclusion, showing that despite the terrible fractures and events that surround them, the people on Terra are still human, desperate for moments of connection just as we are in real life. It was a nice touch.

Overall, Thorpe does a great job of moving the story forward, albeit not as much as the first two books in the series. This is inevitable, really, when you’re considering a seven-book (and three novella?) series about a siege — even when the besieged palace is the size of a continent.

Packed with revelations and story seeds for what is to come in the future, as well as interesting observations about new and old characters alike, The First Wall is a great read, and a must for any fans of the Horus Heresy and Siege of Terra series.

Also on CR: Interviews with Gav Thorpe — 2011 and 2016; Reviews of Deliverance Lost and Angels of Caliban

The Siege of Terra so far: The Solar War (French) and The Lost and the Damned (Haley)