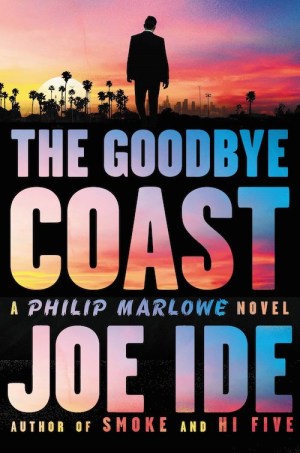 Raymond Chandler’s iconic detective, Philip Marlowe, gets a dramatic and colorful reinvention at the hands of award-winning novelist Joe Ide

The seductive and relentless figure of Raymond Chandler’s detective, Philip Marlowe, is vividly re-imagined in present-day Los Angeles. Here is a city of scheming Malibu actresses, ruthless gang members, virulent inequality, and washed-out police. Acclaimed and award-winning novelist Joe Ide imagines a Marlowe very much of our time: he’s a quiet, lonely, and remarkably capable and confident private detective, though he lives beneath the shadow of his father, a once-decorated LAPD homicide detective, famous throughout the city, who’s given in to drink after the death of Marlowe’s mother.

Marlowe, against his better judgement, accepts two missing person cases, the first a daughter of a faded, tyrannical Hollywood starlet, and the second, a British child stolen from his mother by his father. At the center of The Goodbye Coast is Marlowe’s troubled and confounding relationship with his father, a son who despises yet respects his dad, and a dad who’s unable to hide his bitter disappointment with his grown boy.

Steeped in the richly detailed ethnic neighborhoods of modern LA, Ide’s The Goodbye Coast is a bold recreation that is viciously funny, ingeniously plotted, and surprisingly tender.

When I heard that Joe Ide was going to be writing the first novel in a new Philip Marlowe series, I was intrigued. I know of Marlowe, of course, but have never actually read any of Raymond Chandler’s novels (although, like a great many classic books, I do own a few of them — just keep forgetting, because they’re on my Kindle). Having read all of Ide’s other novels to date, though, I knew I wanted to read The Goodbye Coast. I’m happy to report that it is a very enjoyable P.I. novel.

Ide’s novel opens with a pretty good introduction to Marlowe, as he meets with a new client and agrees to find her daughter. Neither takes a particular liking to the other — Marlowe’s reputation precedes him, in both good and bad ways. What follows is a surprisingly madcap investigation, one that brings in various factions of the Los Angeles underground, and also the murky ways of financing film projects. There’s also another mother with a missing child, some tangled romantic maneuvers, and occasional violence.

If you’re familiar with Ide’s other novels, you’ll be pleased to learn that he brings his great skill for character-building, dialogue and description to this novel. There is also some sharp-eyed observation about Los Angeles and what makes the city tick — both near and far away from the glitz and the glamour. Each character is well-constructed, three-dimensional, and has clear agendas and motivations. I found Marlowe’s relationship with his father rather surprising, but I thought it added some interesting and new-to-me elements to P.I./crime fiction. Marlowe Snr. is a cop, while Marlowe Jr. is a failed cop — however, they work together quite frequently, despite their differences and issues simmering barely below the surface of their interactions. The two grapple with their mixed feelings about Marlowe’s mother, who passed away not too long ago.

It’s a pretty fast-paced story, and one that didn’t struggle to grab my attention. There were times when the lighter, quirkier tone didn’t quite work for me, but that might well have been because I was expecting something a little more straight-faced. (I should have known better, given the author’s IQ novels.) It builds to a satisfying, yet tragic ending — one that does far more than merely wrap up a story, but put a pretty good spotlight on one of the great weaknesses of American society/culture.

After finishing The Goodbye Coast, I knew I had to go back and read Chandler’s original series. I hope to do that very soon. If you’re a fan of the original, I can’t say for definite that you’ll love this — however, if you’re open to reading a new series featuring a characterful P.I. in Los Angeles, then I think you will find plenty to like.

Definitely recommended. I hope there’s another novel in the series on the way.

Joe Ide’s The Goodbye Coast is due to be published in February 2022, by Mulholland Books in North America and Weidenfeld & Nicolson in the UK.