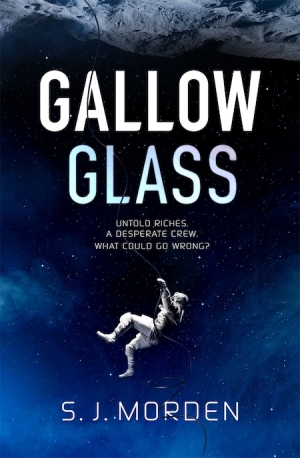 Today, we have an excerpt from S. J. Morden‘s new novel Gallowglass, which Gollancz has provided as part of the blog tour marking the novel’s release. First, though, here’s the synopsis:

The year is 2069, and the earth is in flux. Whole nations are being wiped off the map by climate change. Desperate for new resources, the space race has exploded back into life.

Corporations seek ever greater profits off-world. They offer immense rewards to anyone who can claim space’s resources in their name. The bounty on a single asteroid rivals the GDP of entire countries, so every trick, legal or not, is used to win.

Jack, the scion of a shipping magnate, is desperate to escape earth and joins a team chasing down an asteroid. But the ship he’s on is full of desperate people – each one needing the riches claiming the asteroid will bring them, and they’re willing to do anything if it means getting there first.

Because in Space, there are no prizes for coming second. It’s all or nothing: riches beyond measure, or dying alone in the dark.

And now, on with the excerpt…

Climate change has done more good than harm so far and is likely to continue doing so for most of this century. This is not some barmy, right-wing fantasy; it is the consensus of expert opinion.

Matt Ridley, ‘Why climate change is good for the world’, Spectator, 2013

No child – no good child – wants their parents to die, and no parent – no good parent – wants their child to die. Jack’s misfortune was to live in a time when those benign, dream-like wishes could become hard reality.

Pap and Mam Van der Veerden had recoiled from both the bitter succession wars that split families and consumed fortunes, and the outside world that had become so difficult and dangerous to navigate. It was a reasonable, sensible reaction, but they had gone on to decide, tentatively at first, then with an increasingly fervent conviction, that they would solve all their problems and protect their only son and their immense fortune by all three of them living for ever.

At first, he’d wanted it to be true. Because he wasn’t a terrible child: he was a dutiful, loving son. Only when they started behaving as if it were true – investing in and enjoying the benefits of the latest medical advances that were the sole preserve of billionaires, controlling diet and activities and even the air they breathed – did he begin to question their wisdom. And when he realised that they were absolutely serious, that his memories of them from when he was five and the memories of them when he was fifteen were interchangeable and they hadn’t aged a day? That was when he’d begun to hate the idea.

This urge, this reaching for immortality, this godhood, this transhumanism. It repelled him. But at fifteen, there was nothing he could do. So secretly, silently, he’d made a plan, one that would spin out over an entire decade. If he triggered it early, he wouldn’t have the skills to survive in the outside world. If he left it any longer? The first appointment at the clinic was next week. He was in perfect health. He was the age everyone dreamed of being, for ever. It didn’t matter that the treatments might not work – it was an article of faith that they would, and the process was not to be questioned.

It had to be tonight. It had to be now. It had to be absolutely secret. No one could know. Not Pap, or Mam, and certainly not Mesman, who was his shadow, his bodyguard, his loaded gun, his trigger finger. Her job, her very existence, was to make certain that he stayed safe.

For the hundredth, the thousandth time, he felt the cold, stomach-clenching fear that he was calling this wrong and making a terrible decision. And like all those times before, he faced his fear down and showed no outward sign of his inner dread. If he didn’t go, this very moment, then he never would, never could. This was his first opportunity, and his last chance, to make a choice by himself, for himself.

Deep breath. Outside the window was an expanse of tightly mown lawn under the full scrutiny of motion-triggered floodlights and human guards. Enclosing it was a high wall with laser trip wires and anti-drone turret defences. Getting past those was only the start: they were predictable, and therefore defeatable. Outside the wall, things were very different. More chaotic, more risky. But if everything went right, Jack would never see this room, this house, ever again. If it went wrong, he guessed he’d be seeing nothing but this room and this house for a very long time.

So he took a moment to look around him, to feel the hardwood floor, oiled and varnished under his feet, to breathe the cool, filtered and subtly spiced air, to look at the framed original movie posters from the fifties with their bold fonts and urgent straplines, one last time. He wasn’t coming back. He wasn’t going to fail.

S. J. Morden’s Gallowglass is out today, published by Gollancz in the UK.