Skip to content
HomeQuick Review: ONE DAY ALL THIS WILL BE YOURS by Adrian Tchaikovsky (Solaris) 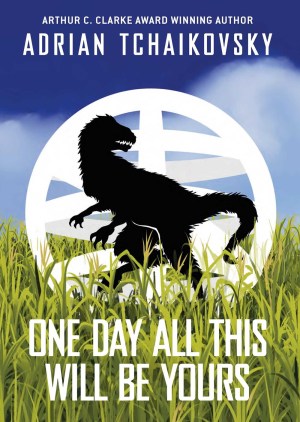 A fantastic, amusing and original take on the time travel paradox

Welcome to the end of time. It’s a perfect day.

Nobody remembers how the Causality War started. Really, there’s no-one to remember, and nothing for them to remember if there were; that’s sort of the point. We were time warriors, and we broke time.

I was the one who ended it. Ended the fighting, tidied up the damage as much as I could.

Then I came here, to the end of it all, and gave myself a mission: to never let it happen again.

This is the third of Adrian Tchaikovsky’s novellas that Solaris will publish, and I think it’s easily the best so far. An original and often amusing take on time travel and humanity’s tendency to inevitably ruin everything, I really enjoyed this.

I’m a fan of time travel fiction, even if I haven’t read a particularly large amount of it. A couple of my favourites are Ian Tregillis’s Milkweed Triptych, and also Elan Mastai’s All Our Wrong Todays, and now I can add Tchaikovsky’s new novella to this list.

Our protagonist, who goes unnamed, has planted himself at a point in the future where all the fractured timelines come together. He’s turned this point into a delightful rural scene, albeit one built and run using all the best plundered technology, etc., from throughout the various times he has access to.

Nothing anyone does can change this perfect final moment of the world. Which is also the first moment of the rest of time, but it’s the only moment that matters. By setting up shop here where the regular passage of time recommences, and denying access to the future to all comers, I am saving the unseen future from interference. I am time’s gatekeeper, and without me the future would become the same ruin as the past.

He’s the last survivor from the Causality War. After years travelling back and forth through time, changing things here, altering things there, he came to the conclusion that his leaders had no clue what they were doing, and because of the nature of time travel and meddling with the past, they often weren’t the same people after a mission was completed. So, he decided to go about it in a different way, in order to protect time. He’s tasked himself with killing every single time traveller who arrives on his farm

This is how we fought the Causality War. A war where you never saw soldiers from the other side, not because you were launching high tech projectiles at each other from ridiculous distances, but because you almost never occupied a common frame of reference. The weapons you launched at each other were cascading chains of historical events, and each one simultaneously hit and caused colossal collateral damage, and did no damage at all, because what was left in its wake was a happy smiling world with no idea there was a war on.

It’s tricky to talk too much about the plot without ruining it, to be honest. Needless to say, something very unexpected happens, which upends our protagonist’s idyllic life — he’s content to grow his crops, feed Miffly, and deal with the problematic time travellers who happen to pop up in the middle of his fields. But now, he has a whole new challenge on his hands, one that goes against everything he thought, and definitely against everything he’s willing to allow. He is, after all, a bit misanthropic. Oh, and he really hates things that are twee (something he and I have in common).

The novella is packed with amusing references and scenes, with plenty of imaginatively skewed versions of history and historical figures. Our protagonist takes holidays through time, rubbing elbows with luminaries from throughout history. As has become expected from Tchaikovsky’s books, there’s also a fair amount of sharp (amusing) observation, too. For example:

It’s a lot like when we screwed the climate, to be honest. You never think you’re going to affect something as big as that. I mean, I’m just burning a little coal here, right? The planet’s very big, this piece of coal or cup of oil or forest of trees, it can’t be important in the grand scheme of things. A weird blind spot for a species all too happy to consider itself the centre of the universe in every other way.

I know this isn’t the most illuminating review, but really I don’t want to spoil anything about the plot. Needless to say I very much enjoyed this novella. Any fan of Tchaikovsky’s existing body of work should find plenty to like in this story. If you’re looking for an entertaining, twisty and original sci-fi novella (which is also quite unnerving in its own way), then I would highly recommend One Day All This Will Be Yours.

Adrian Tchaikovsky’s One Day All This Will Be Yours is due to be published by Solaris Books in North America and  in the UK, on March 2nd, 2021.

Also on CR: Interview with Adrian Tchaikovsky (2012); Guest Posts on “Nine Books, Six Years, One Stenwold Maker”, “The Art of Gunsmithing: Writing Guns of the Dawn”, “Looking for God in Melnibone Places: Fantasy and Religion”, and “Eye of the Spider”; Excerpt from Guns of the Dawn; Reviews of Empire of Black and Gold, Guns of the Dawn, Spiderlight, Ironclads, Children of Ruin, and The Doors of Eden