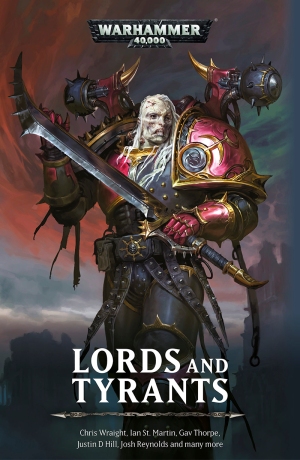 Many are the horrors of the 41st Millennium, from alien tyrants to dark lords in the grip of Chaos. But arrayed against them are champions of humanity, who fight to defend all that is good in the galaxy.

Wracked by the ravages of war, the galaxy has known no peace for untold millennia. To exist is to fight. To thrive is to conquer. Once-proud worlds lie in ruins at the hands of traitorous warlords and vile alien despots. Cowed by the unstoppable march of the Ruinous Powers, humanity stands on the precipice of oblivion. All hope is banished. Yet, there are many who take up arms against these horrors. Noble heroes of the Imperium sally forth to do battle while enigmatic Inquisitors explore the shadowy secrets of this benighted era. In the terror of the 41st Millennium, righteous lords and iron-willed tyrants clash to decide who is worthy of inheriting the galaxy.

This is a pretty substantial collection of short fiction set in the Warhammer 40,000 universe. Sixteen stories, drawing together some fan-favourite characters and some new, I think it would serve very well as an introduction for anyone who has not yet delved into the extensive body of WH40k fiction, while also satisfying long-time fans of the IP looking for some quick-hits of sci-fi action and adventure.

I’m not sure we need to walk through each of the stories for the review, but each of them offers something to readers: be it a short tale about established characters (such as Lucius the Eternal and Fabius Bile), newer fan-favourite characters (e.g., Minka Lesk), or characters created specially for the stories in question. A lot of these stories are told from the human perspective, but each of them finds themselves in a variety of deadly situations and predicaments.

I’d read quite a few of these stories before getting this anthology, but it was nice to revisit them and have them collected in one place. For example, Ben Counter’s Rise, which tells the story of a newly-forged drukhari scourge and his first flight through Commorragh — I really liked this story, and Counter’s on top form as he describes the journey and dangers that lurk in that dark and deadly city. Fans of Josh Reynolds’s Fabius Bile series should enjoy A Memory of Tharsis, a short mission featuring the Emperor’s Children’s chief apothecary and clonelord. I also very much enjoyed Ian St. Martin’s take on Lucius the Eternal in Pride and Fall, which whet my appetite to read The Faultless Blade. Meanwhile, the first story in the collection, Argent, features a character from Wraight’s popular Vaults of Terra Inquisition series (which, likewise, increased my interest in getting caught up on those novels).

I read the stories between novels and other books, and it was nice to dip in and out. (I have a limited stamina when it comes to short fiction — I can usually only read a few at a time, before I become desperate for something more substantial.) Not every story worked for me, but for the main this is a strong collection, and certainly worth the price. If you’re looking for some action/adventure short stories set in the WH40k setting, or just sci-fi in general, then Lords and Tyrants should suit your interests nicely.

Lords and Tyrants is out now, published by Black Library.