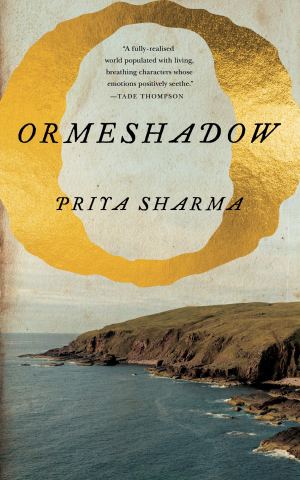 A moving novella about family, story, and overcoming hardship

Burning with resentment and intrigue, this fantastical family drama invites readers to dig up the secrets of the Belman family, and wonder whether myths and legends are real enough to answer for a history of sin.

Uprooted from Bath by his father’s failures, Gideon Belman finds himself stranded on Ormeshadow farm, an ancient place of chalk and ash and shadow. The land crests the Orme, a buried, sleeping dragon that dreams resentment, jealousy, estrangement, death. Or so the folklore says. Growing up in a house that hates him, Gideon finds his only comforts in the land. Gideon will live or die by the Orme, as all his family has.

I wasn’t sure what to expect from Ormeshadow when started reading it. I wasn’t familiar with the author’s other work, but the synopsis caught my attention. The fantasy elements are rather more in the background until later, but the thing that stood out to me was Sharma’s writing and characters: both a quite excellent, and I was quickly hooked.

Ormeshadow, for me, was a story about family and overcoming hardship. Gideon’s relationship with his father is touchingly portrayed — clearly, the former is in awe of the latter, but events of the novella test this affection, and when tragedy strikes Gideon must forge ahead in a much harder reality. As we come to know him, we learn that he is somewhat more sensitive than the other kids his age, not having grown up since birth under the hardship of a farmer’s life. He’s an empathetic soul, and rather more innocent than those he encounters. This short exchange with his father illustrates some of this — he’s just been told the myth of the dragon on the backs of which the landscape was formed:

“But surely, if she could survive there must be more out there, somewhere?” Gideon’s sadness was in his voice.

“It troubles you, doesn’t it?”

“When she wakes up, she’ll be all alone.”

“Maybe in some hidden place there’s another sleeping dragon waiting for her.”

Gideon’s father’s storytelling does a number of things: it brings him closer to his son, but it also shows both the reader and Gideon the power of stories to bring people together, form connections, and also (maybe) impart empathy.

Sharma does an excellent job of evoking the setting: every location of the story is well-realized without being over-described. It’s filled with interesting little details that give us a better understanding of the lives of those living in the community. For example, this sartorial explanation with regards to the fisher community:

“Death was even in their woollen jumpers, each knitted to their own designs so their widows could identify their remains after a pounding by the waves.”

As with many shorter works of fiction, I find reviewing them to be quite a challenge. I don’t want to spoil plot points, and when a book is brief, these moments tend to come rather sooner and more frequently. The story unfolds at a good pace, but is by no means rushed. Unlike many novellas, I also thought it was just the right length — there was no padding, but nor were there moments when I thought the story was rushed or jumped ahead in jarring manner.

Overall, then, I would certainly recommend this novella. Moving, excellent prose, interesting and varied characters, and an engaging story. I thoroughly enjoyed reading this. Pick it up if you’re looking for something a little different.

Priya Sharma’s Ormeshadow is out now, published by Tor.com in North America and in the UK.