Skip to content
HomeQuick Review: WE ARE THE DEAD by Mike Shackle (Gollancz) 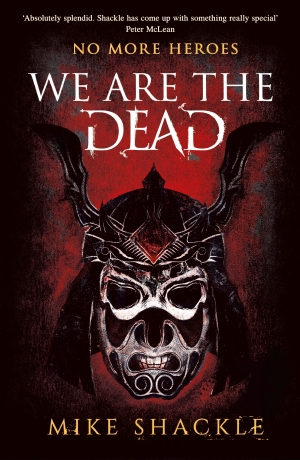 One of the best fantasy debuts in years

The war is over. The enemy won.

Jia’s people learned the hard way that there are no second chances. The Egril, their ancient enemy, struck with magic so devastating that Jia’s armies were wiped out. Now terror reigns in the streets, and friend turns on friend just to live another day.

Somehow Tinnstra – a deserter, a failure, nothing but a coward – survived. She wants no more than to hide from the chaos.

But dragged into a desperate plot to retake Jia, surrounded by people willing to do anything to win the fight, this time Tinnstra will need to do more than hide.

If Jia is to get a second chance after all, this time she will need to be a hero.

It took me longer than I would have liked to get around to reading Mike Shackle’s debut, We Are the Dead. Long-time readers may know how I’ve struggled a bit with the fantasy genre of late. This novel, however, sounded really interesting, so I decided to dive in. And I wasn’t disappointed! This is a gripping, excellently-written (grimdark) fantasy novel.

This is not a happy world, as it turns out. The story begins with the Egrils’ surprise, brutal and highly-efficient invasion. We then jump forward six months, and the rest of the novel takes place over a little over a week in occupied Jia. Key characters are introduced, sometimes in the heat of battle, or just before the world goes to hell in a handbasket.

The main characters are nice and varied: the cowardly Tinnstra, the noble Jax, a pair of frankly-evil Chosen, the misguided and angry Dren, to name only a few. Each comes from a different background, brings their own worldview, and has their own foibles. Each makes mistakes, and must overcome a tsunami of challenges that fall in their paths.  Not all of them will survive (the novel has quite the body-count).

It’s worth spending a little time on Tinnstra. A common trope in fantasy fiction (well, most fiction) is that a protagonist rising to the occasion: growing up or toughening themselves to confront and overcome their new hardships — whether to save the world, or complete some important quest, or any number of other challenges. This isn’t really the case with Tinnstra. She is psychologically ill-prepared for what the Egril bring to her world and life. The daughter of a beloved, accomplished general, she is technically gifted but also a (self-admitted) coward. So, when the Egril invasion succeeds, her world is turned upside down and she finds herself living in constant fear. However, she keeps finding herself in situations that require bravery, or call for action.

“I don’t want to make things happen. I just want to stay alive.”

I can think of a few authors in whose hands Tinnstra might have become irritating (she spends quite a bit of the novel basically whining), but in We Are the Dead, the world simply won’t let her be: she has no choice but to become involved.

I don’t mean to give short shrift to the other characters, all of whom are interesting and engaging in their own right. The gutter rat and gang leader Dren, for example: full of undirected hate and frustrating, he’s lashing out at the world in general, causing havoc and death. The maimed Shulka general Jax, conducting an insurgency with depleted forces, trying to make the best of a bad situation. Yas, the unwilling servant of the Egril (or “Skulls” as they’re called by the Jian), shanghaied into helping the insurgency at great risk when all she wants to do is protect her son.

Shackle doesn’t waste any time before throwing readers right into the story. I was hooked very quickly, eager to learn what would happen to these characters next. There’s no messing about with the all-too-common, excessive scene-setting at the beginning. Throughout the novel, we’re given what we need, and when we need it. There are no 50-page histories of esoterica or world-building elements. The author lets the story give us what we need, and the context fill in the blanks for us. It’s a welcome discipline that is absent from a great deal of fantasy fiction. There are no excessive extrapolations or diversions, nor use of dialectical crutches to convey or distinguish characters. The action scenes are well-crafted, too.

The novel is very well paced. There were maybe a couple of scenes that were drawn out a bit more than necessary, but for the main this is a very tightly written novel. Chapters are pretty short, and keep the story moving at a good clip. The novel is well-balanced between action and quieter moments. Each chapter moves the story forward nicely, and gives readers just enough to keep them hooked and desperate to read on. It was very difficult to stop for the night, and I found myself frequently saying, “Oh, just one more chapter…” Two nights, each one staying up until 2am.

We Are The Dead is among the best fantasy novels I’ve read, and easily one of the best debuts. It’s right up there with Joe Abercrombie, Peter V. Brett, Brent Weeks, and Mark Lawrence. If you like your fantasy novels well-written, gritty, and gripping then I highly recommend you read this.

Mike Shackle’s We Are the Dead is out now, published by Gollancz in the UK.