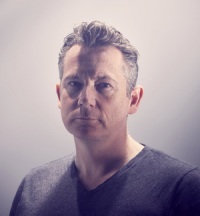 Let’s start with an introduction: Who is Mike Shackle?

I’m a Brit who’s lived and worked all over the world but has settled in the wonderful city of Vancouver with my family. In my time, I’ve sold washing machines, cooked for the Queen, designed a few logos and made a lot of ads for some of the biggest brands in the world. But I’ve always been a dreamer and I’m happiest disappearing into made-up worlds, full of dark and interesting characters, whether that’s in my own writing or enjoying our people’s novels.

Your debut novel, We Are The Dead, is due to be published by Gollancz in August (one of my most-anticipated debuts of the year). How would you introduce it to a potential reader? Is it part of a series?

We Are the Dead is the first book in the Last War trilogy. As per the blurb, it’s a story full of crunching revolutionary action, twisted magic, and hard choices in dark times. It’s about what happens when the bad guy wins and there are no heroes left to come and save the day. It’s a tale about a coward, a teenage psychopath, a single mother and a crippled soldier forced to stand up and fight when it matters most. It’s grim and it’s dark but, at its heart, it’s a story about families and hope.

I stumbled across a really good book about the French Resistance in World War 2 called Fighters In The Shadows by Robert Gildea. It got me thinking about these ordinary people caught up in the hell of war. How can you find hope in a situation like that? Where do you find the courage to go on when you don’t know how you’re going to feed your children each day or you’re worried that you could get shot for being in the wrong place or for having the wrong religion.

We Are the Dead is essentially a World War 2 story in a fantasy setting. I intentionally avoided having any sort of Aragon type figure or a Logan Ninefingers waving a sword about because, as much as I love those sorts of characters, I wanted people in my book that reflected the people I see around me.

On top of all that, there’s a good mix of Samurai culture, Jack Kirby monsters, a bit of David Bowie and all sorts of other good stuff.

I fell in love with Marvel Comics at a very young age. They used to sell these black and white reprints in the UK when I was a kid that you could pick up at the corner store. My parents tried banning me from reading them as they gave me nightmares but really it was my imagination being set on fire. Then Star Wars came out and blew what was left of my mind. I was very lucky that my grandmother was a big sci-fi/fantasy fan and she fed my interest by giving me her copies of Tarzan and John Carter of Mars. Those books led onto Conan and Elric. But I kind of outgrew fantasy for awhile, moving onto crime books and thrillers and Nick Hornby-type lad-lit until I picked up a David Gemmell compilation of some of his Drenai novels and I was hooked again. But the real game changer for me was Peter V. Brett’s The Painted Man book. That made me an obsessive fantasy fan — and inspired me to try writing my own stories.

I have a full-time job so writing has to fit around that. I get up at around 4.45am so I can start writing at 5am. I then write in my lunch hours, on the train on the way home, and then after the kids go to bed – so there’s no waiting for the muse to turn up to be inspired. If I have spare time, I write. I used to be a dreadful pantser when I first started; but now, out of necessity, I try to plan more. They’re not rigid plans though — I still get really nice surprises when things happen that I had no idea were going to.

I remember, when I was about 12, writing a story called “The Ultra Warrior”, a science-fiction tale of genetically enhanced soldiers. It got published in the school magazine and a load of parents complained at the violence! My English teacher was a real star and stood up to them, pointing out that it was a great story.

My first attempt at writing fiction was a terrible Nick Hornby rip-off that was probably a bit too semi-autobiographical for its own good. I found it the other day and had a good laugh reading it. I do wish I had a copy of “The Ultra Warrior” though. I’d like to see what got all those parents worked up.

When I got hooked back into fantasy ten years ago, there was a wave of amazing authors coming through — Peter Brett, Brandon Sanderson, Brent Weeks, Scott Lynch, Joe Abercrombie, Patrick Rothfuss, and Mark Lawrence. They were kind of the children of George R.R. Martin and were riffing of what he was doing. They turned the genre on its head with gritty, dark but very human fantasy.

Now we have another great wave coming along, including people like Ed McDonald, Anna Smith Sparks, Peter McLean, RJ Barker, Fonda Lee, R.F. Kuang and Nicholas Eames. They’re doing their own great spin on things. I really don’t think there’s been a better time to be a fantasy fan. Fantasy has never been in a healthier or more exciting place. 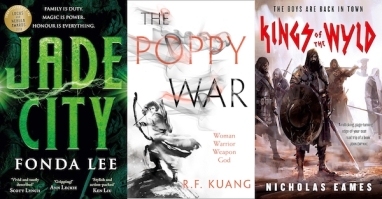 As to where my work fits in with any of that? I’m just happy sharing shelf space with all of the above.

I’m just finishing up Book 2 of The Last War. It’s a monster of a book but I’m really happy with how it’s turning out. Needless to say things go from bad to worse in this one. I’d love it to be my Empire Strikes Back of the series. Then it’s onto Book 3 and trying to work out some way for the good guys to win…

I’ve just finished Crowfall by Ed McDonald. His Raven’s mark trilogy is just outstanding. Galharrow is the perfect anti-hero and I love the world Ed’s invented. And today I’ve started Priest of Lies by Peter McLean – it’s basically The Godfather with swords and magic. Who could want more?

I only tend to read non-fiction when I’m researching for stories and, even then, I tend to skip around, picking bits here and there, otherwise I can fall down a rabbit hole, learning things I don’t need to know.

An impossible question. There are so many that I love. How can I pick a favourite? If I have to though, and that someone was new to fantasy, I’d probably give them The Painted Man to read as that’s what got me hooked and it’s the start of a brilliant series.

I’m writing and painting a picture book for my four year old daughter about her adventures with her best friend, a penguin called Patsy.

We Are the Dead comes out on 8th August, so that’s the big thing obviously. There’s still a part of me that can’t quite believe that my book is going to be published by Gollancz and out in the shops. It really is a dream come true. I’m also going to have a party when I send Book 2 off before I start panicking about Book 3.

Mike Shackle’s We Are the Dead is due to be published this Thursday (August 8th) by Gollancz.

One thought on “Interview with MIKE SHACKLE”